I had planned to write about the lack of leisure in modern life this week, but I didn’t have time.

A nice line, and one which occurred to me on Saturday morning as a way of making short work of this week’s journal, but things rarely happen as I plan. It turned out that I had a very leisurely afternoon and evening. My wife and I, very uncharacteristically, left off our various weekend chores in mid-afternoon and went to Mobile, first to Mass at the Cathedral and then to dinner and a small-scale arts festival in Cathedral Square. The Cathedral is newly and beautifully renovated. I am a little less enthusiastic about the renovation than it may deserve, as the general color scheme has gone from dark and muted to very bright, with a lot of red and gold. The older one was a little more to my taste, but it had deteriorated quite a bit, and the new interior is impressive to my naïve eye. I have never had a great deal of interest in or appreciation for the visual arts, and am notoriously unobservant of my surroundings. At this moment, with eyes closed, I cannot call up in any detail the new interior of the cathedral, much less the old one. The only thing I can say for sure is that the new one has more red and gold, and the old one more green and blue. The one specific thing I can recall about the old one, and whose absence I regret, is that it had tiny lights that looked like stars in the dark green ceiling.

In visiting the art shows in and around the square after Mass, I was more than a little surprised at the number of works I liked. I have not been on friendly terms with art for some time. A year or two ago I looked in at the art gallery at the small college where I work. The work or works on display consisted of big lumpy things scattered about the room, having shapes and colors that made one think of oversized internal organs, along with tubing that suggested blood vessels. The most numerous of the lumpy things were pinkish-yellow and wrinkled, looking to me somewhat like brains. Perhaps they were intended to; at any rate I was not the only one to think that, as a couple of the housekeeping crew came in while I was there and I heard one of them say “We supposed to get them brains out of here tomorrow.” The effect they produced in me was faint disgust, soon overpowered by irritation. There was a page or two of solemn verbiage from the artist on a table. I don’t remember what it said, but I read it, looked around again at the brains, and thought, spontaneously and sincerely, “I hate art.”

The phrase has presented itself to me a number of times since then, when I read of some particularly repellent deed by an “artist.” There’s no need for me to belabor this. I think anyone who has his feet on the ground and isn’t caught up in art fashion can see that much of what goes on in today’s art world is far beyond the reach of any satirist in its combination of ugliness and self-congratulation. But I was pleased, even delighted, to find on my viewing of several exhibits in this small city that there are still artists who approach the visible world with interest and intelligence and affection and who seem to want, and to have the skill, to communicate this interest to others. There were works there that I could imagine paying money for, if I had the money and a place to put them, so that I could look at them over and over again. I usually find it tedious to read descriptions of art, and so I won’t bore you with my clumsy attempts at it. But I have a couple of pictures which Karen took with her new digital camera. I’m not sure whether it’s entirely legitimate for me to post these. I hope the artists would see it as a tribute of free advertising.

Here is an amazingly graceful fish constructed out of odds and ends by Fairhope artist Bruce Larsen: 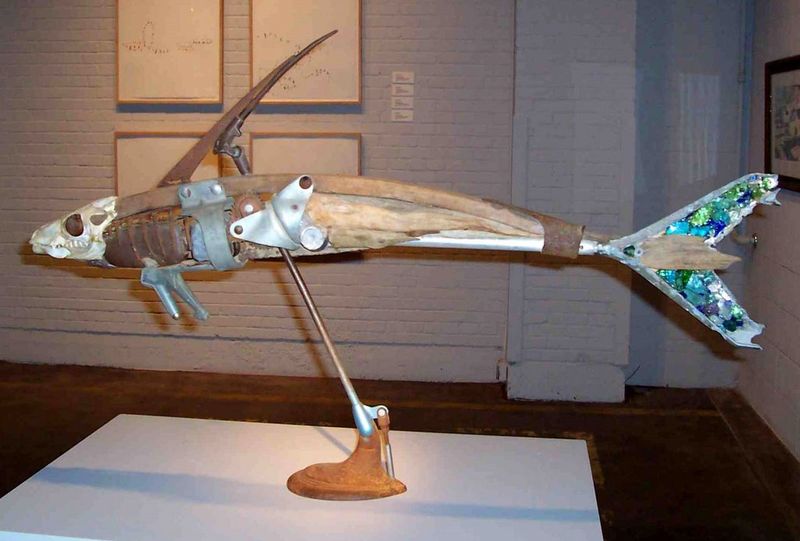 Karen was much taken with this. Mr. Larsen also won first price in the juried show, with a basset or blood hound constructed of similar junk. Its ears were the two halves of a posthole digger. I liked it more than the fish, but we don’t have a picture of it.

And here is a work by Annie Tolliver, of Montgomery, apparently a folk or primitive or naive (whatever the currently accepted term is) artist, which bears a title something like Childhood with ten people in a two-room house: The way they lived in their two-room house, apparently, was to live outside when they could. I love the exuberance of this picture, the way the figures all appear to be dancing or almost dancing. Having grown up in the rural South and being only a little older than Ms. Tolliver I recognize something in this picture, even though I grew up white and affluent while she grew up black and poor. I doubt that either one of us would want to minimize the harshness of the life she and her family lived, but if her picture is to be believed it was possible in that life to experience joy.

There was a certain amount of noxious and trivial stuff in these exhibits, and naturally a lot that didn’t seem (in my very untrained opinion) to be all that well done, but I left with something of the enlivened feeling that follows a good conversation about something that matters. Apparently I don’t hate art after all, which is good to know.