Uneasy in the Aftermath 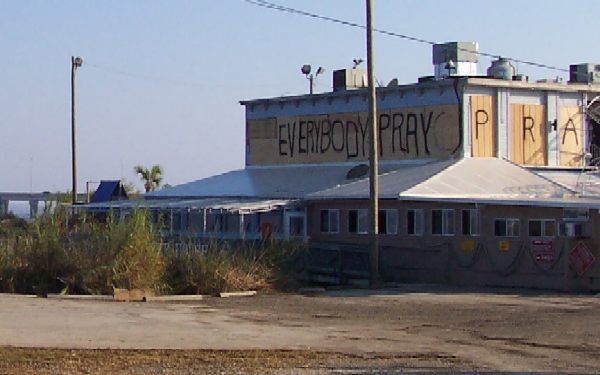 The photograph above was taken last year as Hurricane Ivan bore down on the Alabama-Florida Gulf coast. The restaurant survived Ivan with light damage. When I drove by it on my way home the day before Hurricane Katrina, it looked very much as it does in this picture, except that the writing on the plywood used to board it up said “Pray for New Orleans.” When I drove by it two days after Katrina, nothing remained of its first floor except the pilings that still support the upper floor, which looks salvageable.

Everybody knows what happened to New Orleans, and I don’t have any intention of speculating on what role prayer played or didn’t play in it, or for that matter what role God played. It seems to me that the only reasonable answer to the question of Why? in these situations is We don’t know. I said this at slightly greater length last summer, in this journal entry, and that may be as much as I will ever have to say on the subject.

We got off pretty lightly here on the eastern shore of Mobile Bay. No lives were lost, and serious property loss was limited to homes directly on the waterfront. I got a good scare but only light damage.

We decided to stay in town for this storm. We have two children at home these days, and my wife’s brother, who’s diabetic and spends most of his time in a wheelchair, lives across town. My wife and son went to sit out the storm with him, while my seventeen-year-old daughter and I stayed at home. Around 11am or so it looked like the wind might be about as bad as it would get, and it didn’t seem too bad, so we figured we were all right as long as a tree didn’t fall on the house. Then I looked out from the glassed-in porch on the northwest corner of the house and saw water lapping into the backyard. For the next hour or so it continued to rise until it was lapping against the house. We have a little sailboat which was soon tossing around in a light chop in the back yard, so we had to wade out and secure it. Part of the picket fence floated up out of the ground, concrete footings and all.

To hear little waves slapping against your house when you live a hundred yards from the water is a disturbing sound. I’m glad the storm arrived during the day; to have these storms come at you in the dark, when you can’t really see how bad they are—where the water is, how much the trees are swaying—is far more frightening. But the water came right up to the house and then receded. Aside from the carpet of debris, the broken fence was, in the end, the only real damage.

Our lives were not in danger, because our house is at the bottom of a thirty-foot-bluff, and if the water had kept coming we would simply have walked up the hill. But it was clear that if we got a direct hit from a storm like Katrina we would most likely lose the house. To contemplate that, and its aftermath, is enough to give me some sense of what the people from here to New Orleans must be feeling. By American standards my home and possessions are pretty modest, but they are part of me, and I don’t want to let them go, especially family memorabilia and other things that have sentimental value. My wife and I have begun to expand our disaster preparation plans to include packing the family scrapbooks early in hurricane season and leaving them that way for the duration.

I’ve lived in this area for fifteen years now. I’ve always been too busy to explore the coast to the west of us, which is rich in history and atmosphere, but expected to have the leisure to do it one day. On the occasional trip to New Orleans, usually to pick up or drop off someone at the airport, I’ve noticed the sign pointing to Jefferson Davis’ home and marked it in my mind as one of the places I’d visit when the time came. Now it’s gone, although it had been there a hundred and fifty years and had weathered storms like Camille in 1969. (“This storm can’t be worse than Camille,” many people thought. But it was.) The whole coast from Bayou La Batre in Alabama to New Orleans is, in its human structure and history, gone. Whatever is built there now will not be the same—and indeed the Mississippi coast had already lost a lot of its charm to casinos.

I can only speak for myself, but it seems to me a that a sense of melancholy and unease hangs over even the areas that were not badly affected by Katrina. It comes partly from knowledge of the terrible misery, loss, and disruption to the west of us, and partly from the knowledge that it could be us next time. With near misses from three major hurricanes in less than a year, and most of September, which is generally the most active period, still to go, there’s an anxiety in the air, a sense that it would be unwise to let one’s guard down, worsened by the unnerving speed with which this storm went unexpectedly from relatively mild to one of the most intense on record—as Erik Larson puts it in Isaac’s Storm, the story of the 1900 Galveston hurricane, “it exploded forth like something escaping from a cage.” God keep all other such creatures locked up and far away.

This is the Oyster House after Katrina: 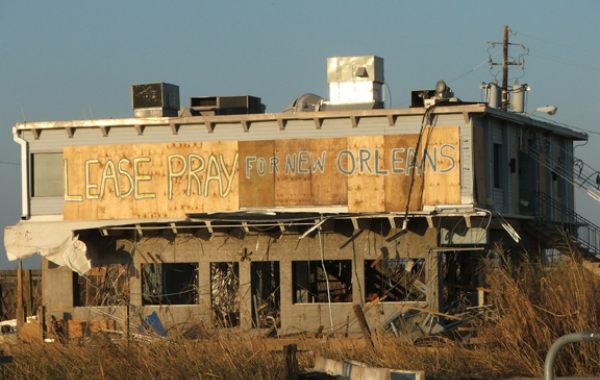