Report from the Hurricane Coast

I made an overnight visit to New Orleans this weekend, and it left me wondering whether the city can ever recover fully. What struck me most forcefully there was not the physical damage done by hurricane Katrina, for which I was more or less prepared, but the fact that, as I was told, the current population of the city, four months later, is somewhere in the range of twenty-to-twenty-five percent of its pre-hurricane level. And there seems to be some willingness to accept the possibility that the city may be permanently much smaller than it was before, both in population and in area occupied, with some of the lowest-lying areas being permanently abandoned.

That would leave a sort of museum city with tourism at the center of its economy. And maybe that’s workable, but it won’t be a living city in its own right. Maybe, further, that won’t be a bad solution for a city that has been in decline for a long time. I don’t claim to know New Orleans very well, but I do know that, like many of our older cities, it has been struggling economically, and suffering the same loss of the middle class.

We didn’t do any sightseeing on this visit, and most of our time was spent in the areas that were least affected by the storm, areas that were not flooded at all. We thought it unseemly to go gawking at the damage, but simply driving into the city from the east on I-10 is enough to give one a pretty strong hint of what has happened. This is where Lake Ponchartrain came in, and for miles everything we could see was damaged and abandoned. And I think the abandonment is really the most unnerving thing. What we saw from the interstate was the typical suburb-scape—shopping centers, apartment buildings, fast-food restaurants, vast parking lots. But it was almost all uninhabited, like a scene from one of those last-man-on-earth movies. Here and there we could see a crew of men and machinery, but the only place that seemed to have anything close to a normal level of people and activity was a Home Depot.

According to the proprietor of the bed-and-breakfast where we stayed, most of the really badly flooded areas are still in terrible shape. Those Ninth Ward houses of which we saw so much on TV are still full of a muck which is said to have an appalling and persistent odor. The cleanup continues, slowly, and a good deal of it is being done by college students from all over the country who come for a week or so, their expenses paid by churches in their home towns, and go into the houses with shovels and rubber boots. We were told that these students are presently doing as much as FEMA to help with the cleanup. I think that is not a widely known fact. If you have the opportunity to donate to a church that’s involved with this effort, you can be confident that your money is being put to good use.

On the way back we took a detour south from I-10 to the Waveland/Bay St. Louis area of Mississippi. As you know if you followed the news of Katrina at all, this stretch of the coast took the most brutal impact of the storm. We had some idea of following Highway 90 along the coast, not realizing that it ends abruptly at what used to be the bridge across Bay St. Louis. Turning left/north where the bridge should have been, we went along the water’s edge on a damaged but passable road for a couple of miles. What had been a neighborhood of homes among what had undoubtedly been a lovely stand of live oaks was a wasteland. We could see foundations, a few pilings—even the houses built with floods in mind had been destroyed—and an occasional trailer, one with a Mardi Gras flag flying bravely. The most doleful sight to me was not the traces and debris of houses, but the trees. Even in January, a live oak is normally full and green, but these were stripped not only of leaves but of their smaller branches: a broken, skeletal forest. With money, houses can be built fairly quickly, but many of these trees must be a hundred years old, and if they live it will be decades before they are the huge kindly canopies they were on August 28th, 2005.

It is not much of an exaggeration to say that the place itself has been destroyed, at least for a generation or two. That is, if you knew these places as they were, if you had grown up in them and loved them still, they are lost to you, just as you might say a beloved relative in the last stages of Alzheimer’s is lost to you, though still physically present.

I don’t have much stomach for trying to discern God’s plan in a disaster like this. It presents a stark choice: you can choose to believe that it is all somehow caught up in his providence, or that it is not. The latter is all too plausible when you stand in the middle of the damage, but I choose the former.

You can get some idea of what it’s like from these photos; the last three are from the area I’ve described. And here is a closeup, at twilight: 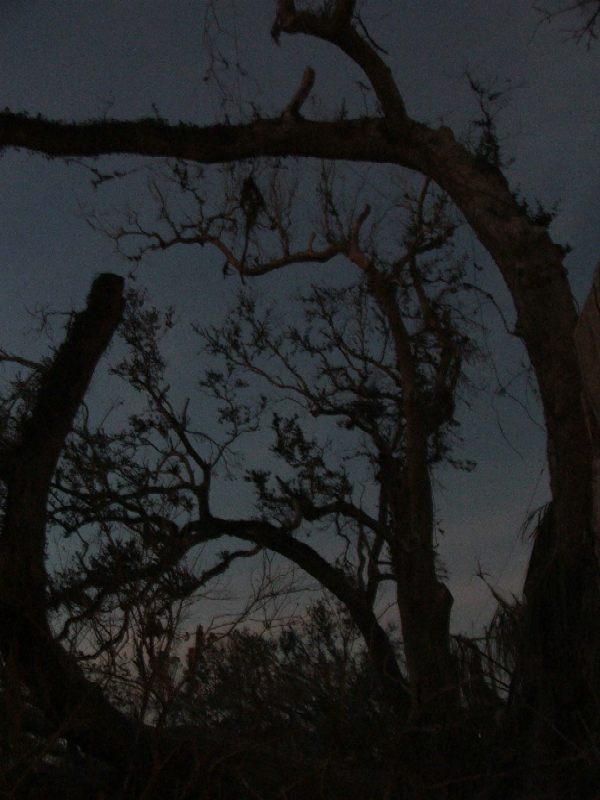