A few older posts that include some Katrina pics: here, here, here. The pics at the end of this post are especially telling.

No Music of the Week This Week

I had hoped to write about Beethoven’s 7th this week, but I’ve been too busy and distracted by Hurricane Gustav for the past several days to listen to music. Maybe next week.

Lucy At the Bay

Clare took these, last summer or fall sometime I think. I really like the colors in this one. (Click the images for larger versions.) 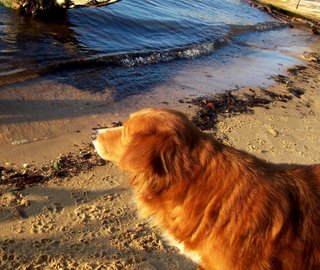 The noble dog faithfully awaits her master’s return from the sea. 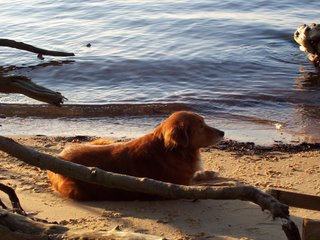 Sometimes the noble dog needs to take a little time for herself. 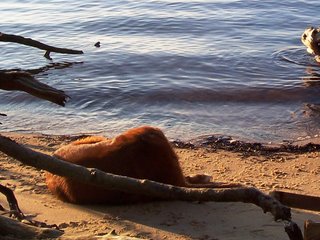 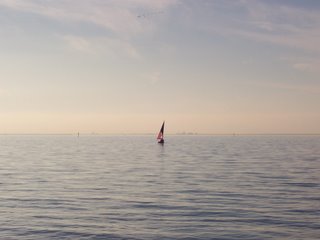 Patience rewarded as the sun sets (and the planet tilts slightly, apparently). 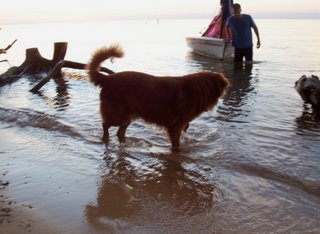 I had a bit of car trouble yesterday—the engine cut out several times and I thought I was going to get stranded on the Bayway, which is a bad place to get stranded. But I managed to limp off the bridge and get the car to a shop. When I picked it up I saw that the bill included this summary of my description of the problem:

It's A Weird World

Every now and then I'm struck by what has to go on behind the scenes to keep the wheels of modern life turning. Much of it is admirable for its complexity and ingenuity, and fascinating for its unnoticed importance. Some of it is less so.

If I stop and think about it, I know that the Coca-Cola company must go to a lot of trouble and expense to make its products look attractive. But I'm not often faced with what that really means. For instance, that the company has a vice-president for design, who is no doubt paid a fortune every year, and who no doubt commands a budget of many fortunes, and whose whole working life, as well as those of his many subordinates, revolves around the designs printed on bottles and cans of flavored water. Moreover, his work is reported as important business news, which—weirdest of all—it is.

Taking A Chance On Love

When as a young man I first heard of Pascal’s wager, I thought it was a silly and trivial way of approaching the question of Christian faith. But thirty years later it makes much more sense to me; in fact it almost seems like the only way to choose. (The idea of the wager, simply stated, is that if Christianity is true you stand to gain a great deal by believing and to lose a great deal by not believing, but that if it is false you risk nothing except being wrong.)

I don’t believe very many people at all have real certainty about the question of God’s existence. On the believing side, there are a few people to whom he speaks directly—very few, in my opinion. I don’t mean people who have a strong sense of conviction that they know what God wants them to do, but those who have had real, direct and unmistakable communication. As far as I can tell God rarely does this, and usually when he does it’s because he wants the person to do something really extraordinary; everyone else has to manage with less. On the non-believing side, certainty is intrinsically impossible; the most the unbeliever can say is that he sees no reason to believe.

I’ll go a bit further and say that most who claim certainty on either side have not fully understood the question. They may have never truly considered the arguments for the other side. I often find non-believers arguing against an idea of God which is far from the real Christian idea, imagining that we believe only in a particularly powerful person, an entity like other entities. (I suppose the same is true of many believers.)

Or maybe I should say that they, believers and non-believers alike, have not fully understood their situation with regard to truth and knowledge. They have not become certain by virtue of an incontestable proof in the way that they have become certain that in plane geometry the sum of the angles of a triangle is always 180 degrees, or that the acceleration produced by gravity is 32 feet per second per second. Scientific skeptics have a point when they say that science has raised the standards for what constitutes proof, and I think that most of us who have absorbed something of the scientific worldview—which is almost everybody in the modern industrialized world—are always conscious of a certain reservation or humility in our claims for religious certitude.

So one considering the possibility of belief, considering whether to take the leap or not, must look at the world and at himself and consider both the plausibility and the consequences of each choice. Pascal’s wager is largely about the consequences, and I’ve been thinking about it in those terms for the past few days, but less with regard to a future life than to the here-and-now.

The question may be put this way: do you choose to believe that the world is what it so often seems, a meaningless succession of physical phenomena of which human life and consciousness are an equally meaningless side effect? Or do you choose to believe that the meaning we see in life is really there, not simply in our minds and emotions but really there, objectively, in the universe itself—that it goes all the way through to fundamental reality?

Another way to put the question: which, in the end, is victorious, love or death? If love goes all the way through the fabric of things to some ultimate source, to a fountain from which all lesser reality springs, then death must die, and love must always live. If not, then love is only a brief spark in an endless night. Is romantic love just a product of hormones and instincts, or is it a response to something truly precious and wonderful in the beloved? (Can we say that something or someone is objectively wonderful?—I think yes, we can.) Is love for children and family and friends just a product of the mechanisms required for the survival of the species, or does it have a meaning in itself, as a communion of souls? Is human love no more than the same impulse that causes a cat find a warm lap on a cold day, or is it a participation in the divine?

If the universe and human life have no ultimate meaning—if there is no God—then I can imagine something better than the universe, and therefore I myself am, in a sense, better than the universe, in that I have created, if only in my mind, a better world. It’s puzzling that I should be able to do this—more puzzling, I think, than skeptics generally grant. How could a meaningless universe produce a creature capable of meaning? “We don’t live in a perfect world.” True enough. But how do we know that? How, in a world that is not just imperfect but a closed material system, did we even get the idea of perfection?

If you can’t know with absolute certainty whether love or death is the ultimate victor, which victory will you choose to hope for and to live by? Here’s where I get back to the wager: if you choose love and are wrong, it doesn’t matter in the long run. The one who did not believe is just as dead as the one who did, but the one who did has lived, for his time, in a world in which the attainment of the deepest longings of his heart was possible, even if never reached. The one who believes has chosen something better than the world. And why should he not?

I desire infinite love, infinite truth, infinite beauty. The idea of God includes those things. He would be worthy of my love even if he did not exist.

(That love is a risk is common knowledge; Sinatra sings the title song here.)

Music of the Week: Two Songs by The Clientele

I was about to skip Music of the Week, not having had time to write, but instead I’ll point you to a couple of wonderful songs from The Clientele’s wonderful album, Suburban Light, because I was listening to them on my drive this weekend and thinking how much I like them. If you’re old enough to have nostalgia for the English music of the mid-’60s, or if you just like the music, or maybe just if you’ve ever been in love, these are likely to push your buttons.

For what is the good of being a man at all if one is not always trying to know the unknowable?

But you love to let me go into a cloud where knowledge does not dwell and where all things are still and wrapped in love and you.

I love the cloud, the silence, the love, and you; and I love the pain, the darkness, and the strange rain of things that happen by your will to me when you desire that I should retire from the cloud and go to search for your footprints in the dark of men’s souls....

The cloud of “not knowing,” the dark, the rain, the pain, the cold, the tempter’s laugh, his loathsome touch, the slimy things of hell, the dank rivers of pride, so still, so black, the pains that come and go, the wood that holds me tight—oh, Love, for you and souls, give those to me and I will call them joyous ecstasies.

I’m supposed to be driving up to north AL on Saturday. Probably we’ll only get a very heavy rain and some strong but not very destructive winds. Probably. What does this stupid storm think it’s doing? They aren’t supposed to behave like this. If it sticks to this path and speed it will be within fifty miles or less of my house for 24 hours or so. You probably can’t see the details unless you click on the image and get the larger version.