This is the old family home of my sister’s husband. With the passing of his parents a year or two ago it became his, or I should say theirs. No one is living there now, and they were generous enough to let us stay there while we were visiting for the holidays. It was like three days in a luxury hotel. 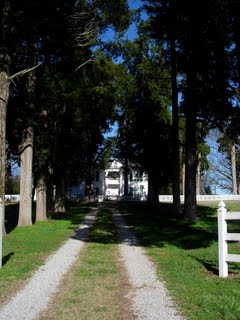 I have a thing about cedars, always have, and the driveway is lined with a very fine set of them, with several more in the yard. This is the view from a second story window on the morning of the day after Christmas (the preceding one was taken as we were leaving; it was dark and raining when we arrived): 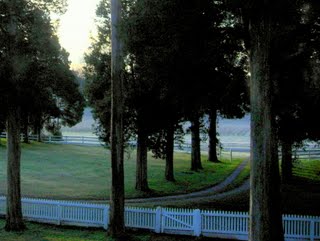 This is a working farm, and behind the house are a number of outbuildings, and this thing which I couldn’t quite figure out. At first you might think it’s a well, and maybe it was, but there’s what seems to be a cast-iron basin in its mouth now. I meant to ask my brother-in-law about it. Anyway, I thought this was a nice image: 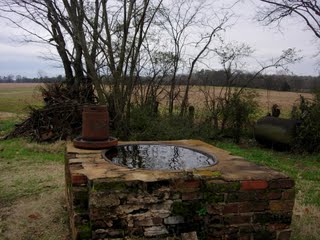 At the Old School

Our Christmas travels took us a couple of times up and down a road that I travelled every day until I was 15 or 16. It’s the road between the two tiny towns or villages of Belle Mina and Mooresville. They’re only a couple of miles apart, and roughly halfway between them was the school I attended through the 9th grade. It was called, imaginatively, Mooresville-Belle Mina. When I was in school there it was a wooden frame building with one room for each of the nine grades. At some point in the late ’60s or early ’70s a new brick building was erected, directly in front of the old one, between it and the road, and the old one was abandoned. Eventually the old one was torn down, and then the new one was abandoned, so there’s nothing there now but an empty spot and some ugly ruins.

But I noticed on this trip a new bit of road just south of the old school site, running a bit to the east, and some sort of new construction at the end of it. So I had to go take a look, and this is what I found (you may need to look at the larger version to read the sign): 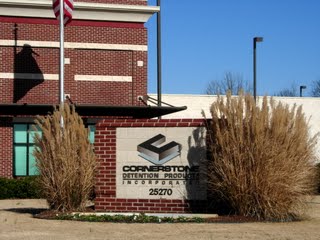 I think this lends credence to the idea that certain places attract certain kinds of people and activities.

Winter as I remember it from growing up in north Alabama was brown pastures alternating with vast stretches of bare reddish-brown soil lying open to gray skies, and woods on the horizon. The picture below is not the view from the house I grew up in, but it’s very similar (it’s near a house belonging to my brother-in-law, where we stayed when we were there a few days ago). This is what I think of when I think of a December landscape—snow was rare. 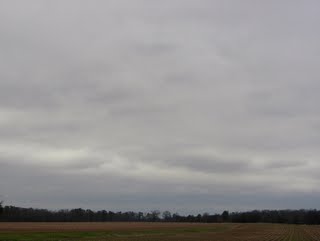 And in contrast there was Christmas. 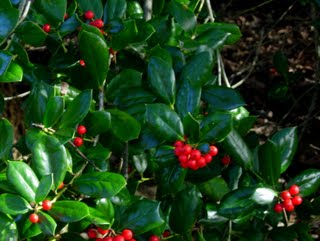 People who live in the northern hemisphere above a certain latitude have a great advantage in appreciating Christmas. Coming so near to the winter solstice, and being a thing of light and color, it brings home the significance of the coming of the Word of Light in an immediately sensual way not available to those living where there is no real winter, or where December brings the longest, not the shortest, day of the year. Where I live now is about as far south as you can go and still get much of that symbolism. There is a winter here, but it’s mild, and there’s still a lot of green. The area where I grew up is 350 miles (about 560km) north of here, and has something more akin to a real winter, though of course it’s pretty mild compared to the real north. 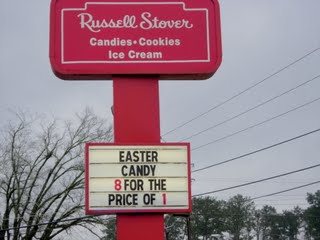 (Oops—I somehow managed to point the link to the same small image that’s displayed here; I’ve corrected that, so now you can click and see the 1024x768 one. Not that you need to, especially.

I may post nothing but pictures this week. I have a number of interesting ones, and I’d like to take a break from writing, maybe in hopes of getting some new project started after the turn of the year.

I really needed a tripod for this—it’s blurry, but still pretty, I thought. 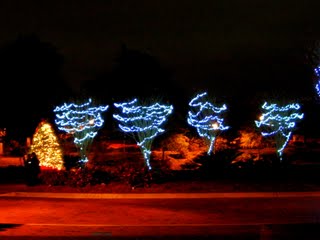 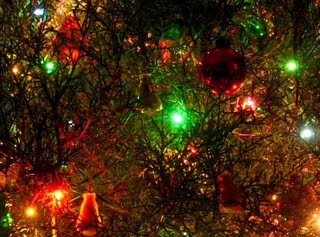 Every year I recommend what is probably my favorite Christmas album, A Tapestry of Carols by Maddy Prior and the Carnival Band. This year, thanks to some YouTube subscriber who also likes the album, I can offer you a sample track from it.

I’ll be offline till late Saturday or early Sunday. I wish everyone a merry Christmas, and pray that everyone will follow the light that leads home.

I was not very pleased to see this when I walked the dogs this morning. The picture is not very good (my camera didn’t seem to be able to focus on anything in particular), so it may not be obvious that the horizontal object in the water is an alligator. He’s maybe thirty or forty yards (roughly the same number of meters) away. I estimate he was 5-7 feet (1.5-2 meters) long. Big enough to think my little dog looks like a good meal. I’ve never seen one this big this far south in the bay, and he is not welcome. If he’s looking for warmer water, he’s headed in the wrong direction (south, toward the Gulf of Mexico). (I see I’ve picked up my wife’s habit of referring to any wild creature, especially a disgusting or dangerous one, as “he,” but of course I have no idea what sex it actually is.) 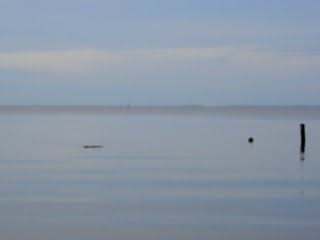 And as luck would have it some of my cousins chose this moment to have a morning swim. I didn’t try to warn them. That side of the family doesn’t usually want to have much to do with me, and frankly they’re not real bright anyway, though surely they have enough sense to stay well away from an alligator. 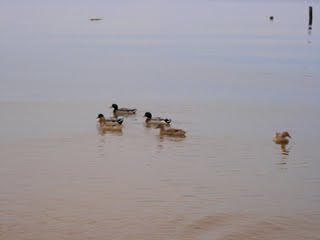 This picture would not be at all strange except for the fact that it was taken last week. Even in south Alabama gardenias are supposed to be summer flowers, but I walked up the hill one night and saw this one, and one more on the same bush. The next morning I took my camera with me. It had been raining all night and was still sprinkling a bit. 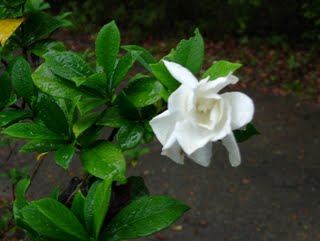 It’s not precisely a rose e’er blooming, but it’ll do. It smelled wonderful. This morning I noticed it had gone the way of all earthly flowers and turned brown.

Wide, Wide in the Rose’s Side

We went to the cathedral for Mass today, which we hadn’t done for some time. For a while we were going there every Sunday, though it’s a 20-mile (32km) drive. When gasoline was so expensive a year or two ago we stopped, and got into the habit of going to the 5:30pm Mass at our local parish. Not being a morning person, I rather like going to Mass on Sunday evening; it’s nice not to have to get up and be in a hurry to get somewhere, and most of the day can be quite leisurely, with Mass as the late afternoon-early evening main event.

But we went to the cathedral today, partly because we’re going to be out of town on Christmas Day and won’t be able to go then. One of the main attractions there is the choir, which I’m sure I’ve mentioned before, and they sang a really striking piece today: it’s by Joel Martinson and is a setting of this text:

Wide, wide in the rose’s side
Sleeps a child without sin
And any man who loves in this world
Stands there on guard over him.

The music was beautiful, but the text really knocked me out. “Wide, wide” is obscure, but in the rest of those lines you have in a few words something important about the essence of manhood. I could say more but I’m afraid it would be clumsy; just read the verse again, and think about it.

The text was not attributed, and I had to know where it came from. I supposed it must be medieval, though rendered in modern English; that might, I thought, account for the strangeness of the first line. And “in the rose’s side” is very beautiful, and the sort of almost shocking image that one finds in old Christian poetry.

So as soon as I got home I got on the computer and searched for it, and could not have been more surprised when I found the name of the author: Kenneth Patchen, a 20th century American who wrote in a sort of beat/surrealist manner. I had a brief enthusiasm for his work when I was in my early ’t20s but haven’t read him since.

There is no mention in the Wikipedia bio of Patchen being a Christian, and I wouldn’t have guessed it from what I remember of his work. But it sure seems like he was when he wrote those lines.

An Atheist Christmas: Sad and Weird

Via NRO, news of an atheist Christmas “celebration” in the UK, sponsored by the Rationalist Association. “Celebration” is in quotes because there seems to be more spite than joy involved, and it is certainly no celebration of Christmas, but rather a sort of anti-Christmas—as best I can tell a sort of long jeer at Christmas proper and Christianity in general, mixed with cheers for various leftish political causes (apparently there was a bit of controversy when one of the speakers showed signs of being a “climate-change denier,” which is a richly revealing epithet).

I want to be clear that I’m not suggesting that there’s anything amiss with people who are not Christians enjoying the holiday. In countries shaped by the Christian tradition, Christmas is a cultural as well as a religious holiday, often more the former than the latter. And there are millions of people of other faiths or no faith at all who enjoy it on a purely human level. And who would ever wish to deny them that? I’m happy for them to see that much of the light of Christ; may they see more of it every December. Irving Berlin, the composer of “White Christmas,” was said to have loved Christmas as much as the song suggests, and he was Jewish. And I think that’s wonderful.

But to make the holiday an occasion for a very reactionary round of Christianity-bashing, to go to the trouble and expense obviously involved in this show for the sake of denouncing the religion you don’t believe, doesn’t seem very rational.

The spirit of the thing is summed up in this bit of advertising: “Take the Christ out of this Christmas with the perfect godless gift...” The site is full of things like that, half appalling and half amusing, e.g. a “festive song,” which seems, on the basis of a thirty-second sample, to be a sort of ‘70s soft-rock song with rather joyless lyrics like “Some understand the science of the season/Don’t need no gospel...” (Do they think Christians don’t know what the winter solstice is?) I can’t say any of it is terribly offensive, though it seems to want to be. It’s mostly just weird. And sad.