The station went on the air just last week. I don’t listen to the radio very much, and when I do it’s usually not AM, but I tuned in Friday afternoon. I was almost home, so I only had a few minutes to listen. It was some sort of call-in question-and-answer program, and when I tuned in the host (a priest, I think) was discussing with the caller the last days of St. Therese of Lisieux: the terrible agonies she suffered from the tuberculosis which killed her, and her effort to accept that suffering and offer it willingly to God.

There are a lot of small Christian radio stations in this area, and Archangel Radio was first intended to occupy this building: 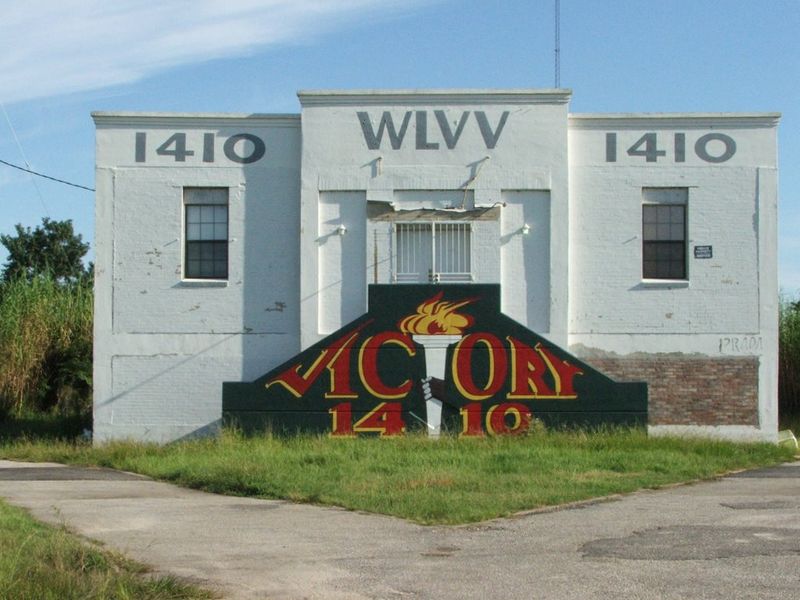 It had previously housed another station which had also been badly damaged by Hurricane Katrina (like the Oyster House, it’s located on the Mobile Bay Causeway, which frequently gets flooded by hurricanes). But something went wrong with that deal, and the building went to another station. I pass the building most days on my way to or from work, and I had noticed recently that it now bore new call letters: WMOB, AM1360.

The Archangel program was winding up, and I thought of this other station. Since it was only a few clicks away, I tuned it in. I caught just a minute or so of the speaker making a concluding point having something to do with the Book of Life described in Revelation, and then his signoff: “This is Roland Dart, and you are born to win.”

What a contrast: agony, blood, sputum, suffocation on the Catholic side; on the other side, winning. I almost said “the American side,” which actually would be appropriate; I shouldn’t say “the Protestant side,” because the broadcast I was hearing was a very American form of Protestantism which is by no means approved by all Protestants.

There is a lot to admire in American evangelicalism, but this tendency to picture worldly success as a natural consequence of embracing the Gospel is not one of them. I had not heard of Roland Dart before that moment, and I don’t want to misjudge him, and perhaps his slogan is not meant to refer to worldly success. If he is any kind of Christian at all, he doesn’t mean only that. But at a minimum, it indicates a questionable emphasis. (Here is his web site, if you want to judge for yourself.)

One may hear, in evangelical circles, suffering viewed as a necessary trial and as something which makes one stronger, but I can’t recall encountering in any form of Protestantism the idea that suffering has a positive meaning in itself. That seems to me a mostly Catholic thing (I have to plead ignorance on Orthodox views).

Catholic emphasis on suffering can become morbid, and I can’t deny that a good bit of what I’ve seen in that respect—some of the art of the Renaissance, for instance—has struck me as excessive. But it’s an excess of something (paradoxically) healthy. Viewed simply as a matter of psychology, it’s a great benefit. We will all have pain in our lives, and the Catholic way of looking at it turns it into something we can give, a personal sacrifice that actually has an effect.

There is an element of sacrifice in every gift: in even the smallest, one has given up something of one’s own, a bit of time or money or effort, with the intent and hope of making someone else happy, at least for a moment. And in general a greater sacrifice is a greater gift (setting aside various forms of manipulation, which are not really gifts at all but attempts to control, or to purchase affection and gratitude). To be in physical or mental pain, and to offer that pain to God, as a gift and a prayer for not just the brief, but the eternal, happiness of those one loves...well, if there is another way of looking at suffering that could give it more meaning (for it is suffering that seems to be meaningless that is hardest to bear) and more assistance in bearing it, I can’t think of it. (I’ve written about this before; it’s something I often think about.)

As far as I know this idea is not found in Protestant thought generally, and that’s unfortunate. Perhaps it’s being rediscovered, as seems to be happening with some other Catholic ways of looking at the faith. It seems to me a very striking and significant difference. I don’t know that it necessarily involves in itself a serious doctrinal disagreement, but it certainly illustrates the way doctrinal differences can produce very different cultures of faith. Probably 80% or so of what Roland Dart believes is not seriously at odds with the teachings of the Catholic Church, but that 20% can make a pretty big difference.

I don't think it really comes into Protestantism because 1) a priori, they don't have and reject the idea of meritorious sharing in the suffering of Christ - they don't understand Paul's 'I am making up what is lacking in the something something' in that way. They think such an idea is Pelagian. 2) they don't look at crucifixes, they look at crosses.

Well, I haven't really thought about this before, but one thing that seems to be happening around here--we're talking mailine Protestant ministers--is that as certain forms of orthodoxy are going out the front door, some acceptance of Catholic teaching is coming in the back door. You can see how this would happen. Once the barriers are down, all sorts of things can come in both good and bad.

I've talked to some of my friends here about "Making up what is lacking in the suffering of Christ," and not only have they not rejected what I've said, but I've heard one of them passing it on to someone else.

Both of those crossed my mind, actually, but I was late writing this and didn't want to take the time to explore them. I've sometimes wondered how Protestant theologians treat that sentence of Paul's. I know it's not wise to generalize too much about Protestant theology (as opposed to less formalized attitudes), but certainly for most evangelicals that statement would be in total contradiction to their general view.

Also, I've sometimes wondered if the empty cross is a side effect of theology or a direct reflection. I never heard it mentioned when I was growing up Protestant, but then there were effectively no Catholics or Catholic churches around to provoke the question.

My sister was secretary (or some such position) of the Catholic students club at her university, and went to meetings with other Christian student groups to plan ecumenical events. At one they were planning a slide-show (or some such) of depictions of the Life of Christ, and as she tells it, when she said "Oh, I know a really good Crucifixion we can use", a Methodist looked a bit worried and said, "Do we have to show Jesus being crucified?" (As though a picture of someone else being crucified, just to illustrate what crucifixion was, would be fine; but depicting it happening to Jesus was somehow in bad taste.)

The empty cross is a direct reflection of Protestant theology. It is supposed to show he is not being crucified any longer (like Catholics go on crucifying him in the Mass) and the sacrifice is not being repeated (as in the Mass), but it's all over and he's in heaven and the cross is empty.

Responding to Janet: RC on Protestant influence has been going on for 500 years. A problem with it (ie, a way in which it can undermine the Christianity of the Protestant) is that it is reintroduced without the general controls or other, balancing principles which exist in RC. So, for instance, if Protestants become interested in tradition, and therefore drop or dilute sola scriptura, they don't actually have an ongoing teaching authority, and before they know it, they have undermined Scripture without anything to put in its place. If they become interested in 'making up what is lacking in the sufferings of Christ' without the balances of RC, before they know it, they are Pelagians. And so on. I've seen these debates for 15 years, in my seminars, between, eg a conservative Calvinist and a liberalising Evangelical, and very often, though the Calvinist is rejecting an influence of RC or an RC idea he is in another way defending Christianity, and the actual RC is more with him than the 'Catholicising Evangelical'.
Taken out of their context within the complete Gestalt of Catholicism, 'Catholic' ideas are often harmful to Protestants.

"Do we have to show Jesus being crucified?"

I have a former student who was on 'probation', training to be a minister, and he wanted to show Caravaggio's Thomas touching Jesus' wounds. He was forbidden by the minister on the grounds that the sight of the blood could upset people in the congregation.

I've seen a similar phenomenon in less theologically sophisticated evangelicals, in which they just start grabbing onto bits and pieces of everything. In fact that guy I linked to is an example: if you look at his web site, you'll see he's decided for some reason that Christians need to follow the Jewish/OT calendar of festivals. In that sort of case it's the result of one guy going off with the Bible and beginning to read it idiosyncratically. I knew a family who, along with some friends, had constituted themselves the Something-Or-Other Catholic Church, in which the husband had made himself a bishop. It was weird--they had a lot of the trappings, and yet no institutional or serious theological connection with the Church.

I meant to add, yesterday, but have been extremely busy: that squeamishness that doesn't want to be reminded of the crucifixion is not a fault that seems to be generally found in American evangelicalism. It tends to put a strong emphasis on the immensity of the sacrifice, and the believer's obligation to it. There are a lot of pretty emotional songs on the topic in the CCM repertoire.

If there's still a reservation among them about the crucifix, I think it has more to do with fear of "idolatry."

It's a fair point Mac: for instance, nearly all my conservative Protestant students love The Passion of the Christ. There the emphasis on suffering is separated from their cultural taboos about crucifixes as such.

Oh yeah, I totally forgot about that phenomenon: it was HUGE here. Evangelicals were wild about it.