A note on the English love of ghost stories, via Andrew Stuttaford at NRO. The link to the story from which he's quoting is broken; go here to read the whole thing.

A marvelous gallery of spectral photographs assembled for this week's program at Music from the Hearts of Space (one of my guilty pleasures).

We went to eat at R&R Seafood, on the causeway, last night--my wife, daughter, son-in-law, and grandson. When we got there, about 6:30 or so, the western sky had this beautiful band of pure pale green light at the horizon, turning into a sort of pink-orange higher up, then blue. My wife bought herself a new camera not long ago, and I grabbed it and tried to get a picture of the colors. Which as usual, of course, do not really appear in the picture, at least on my monitor. Still, I sort of like it.   This is looking toward Mobile from the causeway, and those giant cranes are at the shipyards. 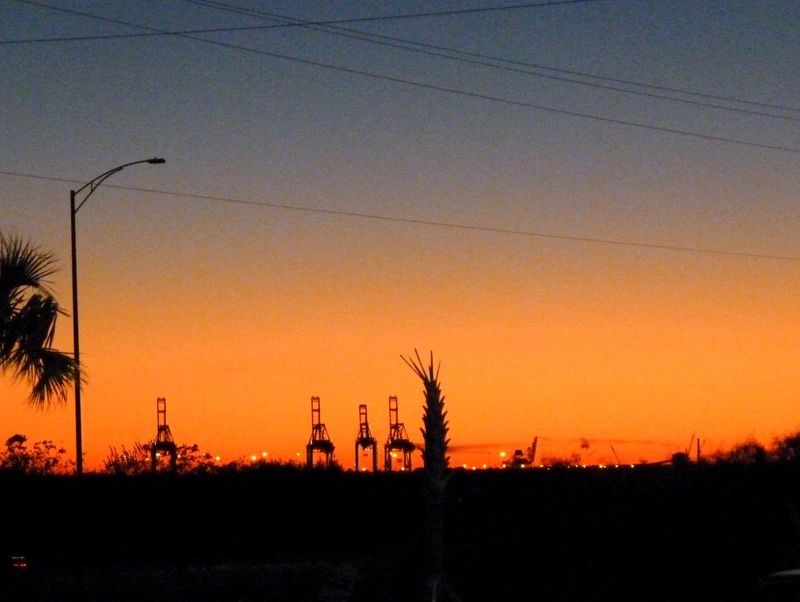 Update: this is R&R.

Life in the South

"...more than 30 people stopped to help and pray for those injured in the wreck." (my emphasis)

Johnny Cash & June Carter Cash: One Piece At a Time

Something a little different from them. June doesn't actually sing in this one.

Ok, you want something more romantic from these two, I know. Here you go: someone put together "Ring of Fire" in separate versions by each of them, with a montage of images from the excellent movie Walk the Line. The words of the song, as you may know, were in fact written by June about Johnny.

I generally try to avoid speaking quite so harshly about the president, but aside from that I agree with Kevin Williamson's agreement. The beginning of the piece to which he links is excellent, but unfortunately the rest of it is unavailable to non-subscribers (to The New Republic).

I haven't seen very much of Stephen Colbert's tv show, because when I have seen him I didn't think he was really that funny. The opening is quite funny, but to my taste that's the best part. My first impression was that he was just another smirker, like Jon Stewart, but I think he's really better than that. This appreciation of him by Kathryn Jean Lopez of National Review makes him sound much better than that. It's not enough to make me watch his show; there are too many other more interesting or important things to do. But having read this, I respect him in a way I didn't before.

Speaking of Jon Stewart, there's some amusement in the fact that a Rally to Restore Sanity, a rally "for the people who think shouting is annoying, counterproductive, and terrible for your throat" is being organized by the guy responsible for this. I've only seen Stewart a few times, but on the basis of those I think you probably have to be a member of the church of the left to enjoy him very much; unbelievers are likely to wonder what all the enthusiasm is about.  (I was pleased, some months ago, to find that Christopher Hitchens doesn't think much of him, either.) No doubt it's always the nature of political humor that it appeals more to those of the same persuasion--one man's wit is another's hate speech in this context. But I wonder if that isn't even more the case now, with the political climate so polarized.

It's always partly funny and partly disturbing when left-wing academics talk about the right. For people who pride themselves on being smart and rational, and who habitually criticize others for failing to understand those who are different, they have an awfully hard time dealing with the possibility that people can disagree with them without being evil. It was comforting to read that most of the participants in this meeting were unreceptive to the idea exploring legal mechanisms to "crush" the Tea Party.  "Prospects for an American Neofascism," indeed. I think that in some obscure way they get off on play-scaring themselves this way, and that they're a little disappointed when fascism fails to appear (as it has persisted in doing since the '60s).  Likewise for some of their counterparts on the right--I think Obamacare is a really terrible plan, but, come on, it's not Kristallnacht.

I laughed out loud at the self-contradiction in the title of this album.

I was pretty depressed a few days ago (I'm better now) and I often found myself thinking about how much of life consists of disappointment, and fighting off the idea that it's not really worth it (which is probably what I would think if I didn't believe in God). Monday night, out for a walk, I saw clouds passing swiftly across the still-nearly-full moon--billowy cumulus clouds, but thinned by the strong south wind that was pushing them along. Most of the time the moon was visible, at least faintly, now and then coming into clear view through a space in the clouds or being completely obscured by an unusually thick one.  And I thought what a privilege to see this.

I wonder what folks in the UK think about this. Alarmism, or a serious concern?

We don't really have autumn here. At this time of year the nights get a bit cooler but the days are still fairly hot, into the mid-80s (F--high 20sC). Mobile Bay is a shallow body of water that gets very very warm during the summer. By the end of summer the water temperature is at least in the high 80s, warmer than the summer air in a lot of places. It doesn't even feel especially cool if you step into it.

In early fall the humidity is also generally much, much lower. So sometimes at night the air is some twenty degrees (F) lower in temperature than the water, and very dry. And when there's a mild breeze off the water, and I'm walking toward the bay and am still some little distance away, I find myself suddenly, in the space of just a step or two, moving from cool dry air into warm moist air. I love that.

More Stuff I See On the Way to Work

This morning I saw a car that had a big sticker saying "Dog Is Love," and some other dog-fanatic message that I can't remember now. Well, fine, I like dogs, too, but I wondered if this person really meant the implicit putdown of Christianity ("God is love, and he who lives in love lives in God, and God in him"). Then I noticed that the car also had one of those Darwin-fish emblems. You know what I mean if you drive in this country: it's a parody of the Christian icthus symbol, with Darwin's name in place of the Greek letters (also little feet--fish evolving into amphibian).

The Darwin fish seems to be pretty popular, which means a lot of people consider it a pretty good jibe, but it's always struck me as a massively ineffective one, because it's so asymmetrical. It's like an envious person saying "Well, you may be rich, but I have a coupon for a free order of fries at McDonald's." It suggests that the person displaying it puts in Darwin or Darwinism the same sort of faith that a Christian puts in God, which is just sort of sad. He would be better off putting faith in his dog--at least the dog knows who he is, and loves him. In the case of the owner of this car, the dog might be a better philosopher than the master.