I was amused (and complimented) by the remark a few days ago from our resident film and theology expert that "almost anything Mac posts including pictures of herons tells us more about the meaning of life" than the political commentary I had linked to. It reminded me that I have another heron picture I've been meaning to post. This was taken on the same morning as the one I posted a couple of weeks ago. Most likely this bird is the offspring of the other. I thought at first glance that it was some smaller species of wading bird, because the coloring is a little different, but the general shape and proportions are the same as the adult, as well as features such as the eye and beak. So I think what I happened upon that morning was the mother heron taking her baby out for a feeding lesson. 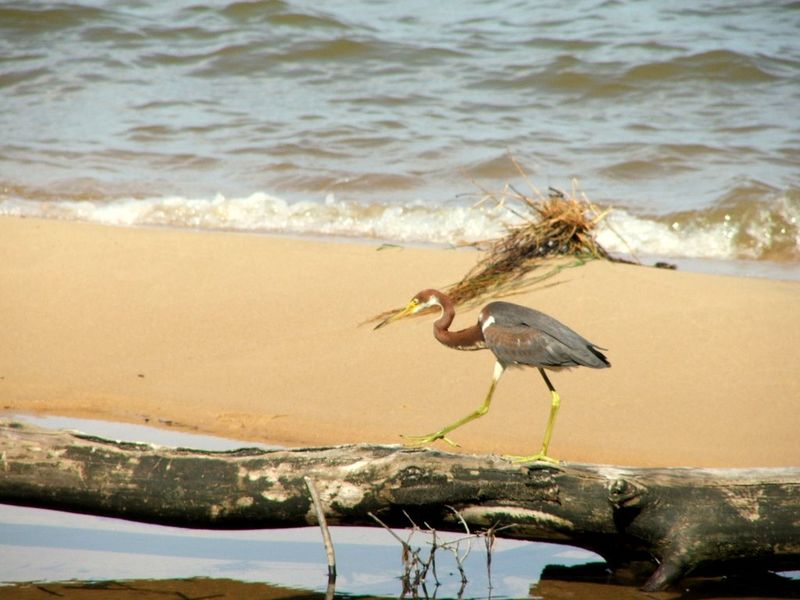 The adult was about 15 feet or so (5 meters) to the left, out of the picture. This morning I saw what was obviously a heron, but smaller than an adult, fly out of the woods and light in a dead tree which is very popular with birds in the area, especially larger ones. I figure there's a fair chance that it's the same juvenile or one of its siblings, as there can't be that many families in the immediate area.

I'd like to get a good picture of an adult in flight over the water, as they're majestic and graceful...though one would really need a movie to capture that.

UPDATE: Thanks to Janet Cupo for pointing out that this is not a juvenile great blue heron, but a juvenile or immature tri-colored, also known as Louisiana, heron. The picture of the juvenile tri-colored here leaves little doubt. So it seems I was not watching a family picnic.

That is a juvenile tricolored heron. When you posted the first picture, I thought it looked dark for a great blue and I've been looking at the picture, and can't tell if it's a tricolored because the parts that would be white aren't visible.

Interesting. In my Audubon book the picture of the tricolored (Louisiana) heron, presumably adult, does have white patches like this one, but is overall much darker. While the picture of the great blue looks pretty much exactly like my other picture. So possibly these two are not even related. I know someone who is an avid "birder" (I think that's a funny word)--I'll show her the pictures and see what she says.

I would call my adult blue-gray (more gray) and the Audubon one gray-blue (more blue), but the colors are in the same range. Of course one can't account for variations in image quality, not to mention reproduction on page vs. computer screen.

Does your camera have a video thingy? At Santiago, the Methodist minister I walked with had the nous to turn his camera to video at the incense censer - I was stuck trying to get the damn thing in flight. It would be great if you could post the video.

Yes, it does, and it works pretty well. I actually have a couple of videos that I had planned to post, but I have to convert the really huge files produced by the camera to something uploadable, and as I don't know anything much about video I haven't gotten that done yet. The real trick with the heron, of course, would be to actually catch one in flight close enough that you could see it clearly. The bigger one of these two flew away while I was watching and I tried to get a picture, but I only got half the bird in the frame, and it was too blurred to be interesting.

I think you're right, Janet: here's a juvenile tri-colored that looks exactly like the one in my picture. Must be nearly full-grown, though, as mine is about the size that the article says an adult would be. I'll update the post.

On the basis of size, also, the other one must be a great blue. It's a very large bird, way larger than the one in this pic.

Is "birder" American for twitcher?

I don't know--what does "twitcher" mean? I mean, if it's other than one who twitches, in which case the answer is no.

I take it to be the correct term for bird enthusiasts (the ornithological equivalent of train spotters).

In that case the answer is yes. Slightly odd terms in each case. I don't know whether I'd rather be called a twitcher or a birder.