The Queen's Message and Other Christmas News

We've had a pretty quiet and very pleasant Christmas Day. Only one of our four children is here, and we slept late and didn't eat breakfast until after 11 or so. Now it's getting late, and I'm sitting in the living room near the Christmas tree and listening to the rain. My wife and I had been so busy for the past couple of months that we hadn't thought about Christmas as much as we usually do (I certainly hadn't; she still managed to make some definite plans about food and family get-togethers.) Last weekend we bought a tree and she put the lights on it. We planned to wait till this weekend to finish decorating it, but suddenly realized late last night that we'd completely forgotten about that. So we've left it that way. It's actually rather nice, having only lights, although I think I prefer it with the full outfit, especially the glass ornaments that multiply the light.

I never have been able to take a good picture of one of our Christmas trees. I probably need to set up a tripod, because the exposure time is too long for me to keep the camera still. So I took one of my bad ones and messed it up even further, the way it might look if you were falling asleep while looking at it. 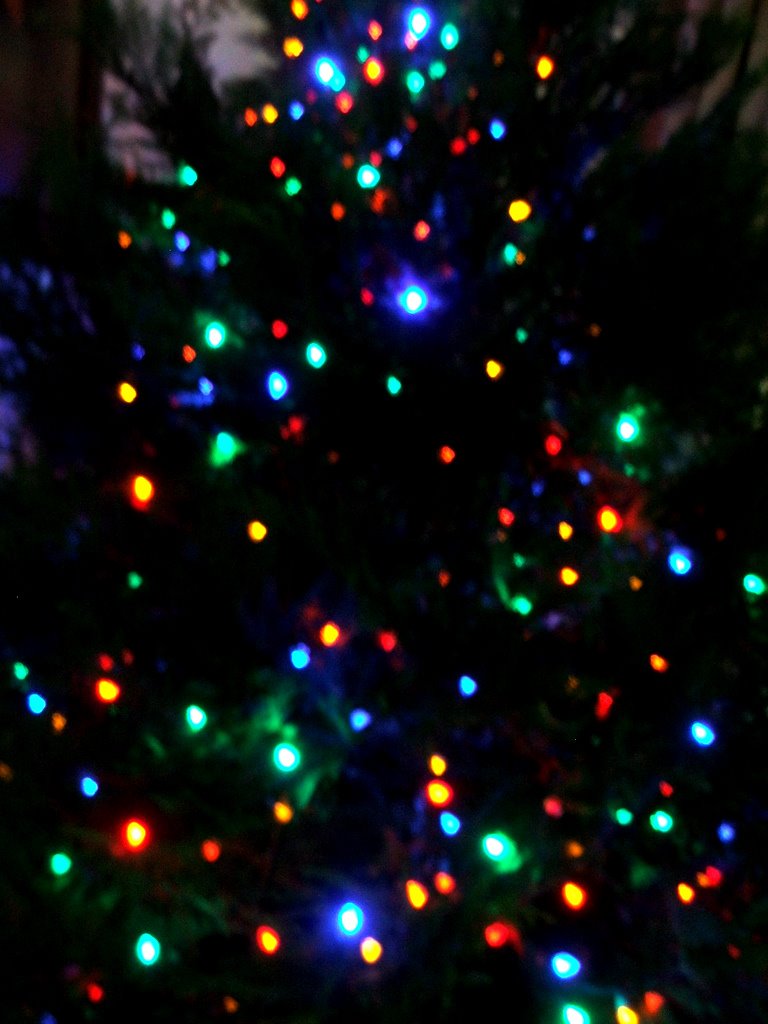 I'm not sure how I ended up at the BBC's site earlier today watching the Queen's Christmas message. But I'm glad I did. I found it impressive and touching, and began to think that it might not be a bad thing to have a monarch. As I've mentioned here more than once, I get the impression from conservative British writers that the Queen's domain is in steep and irreversible decline. But you certainly wouldn't think that from listening to her. It is a heartening message, and makes me hope that there really is such a thing as the Anglosphere.

A Marmite Encounter of the Third Kind

Speaking of British things, I have finally tasted Marmite. As it turns out, one can in fact buy it in at least one of the supermarkets here (the Publix chain). I of course am a great lover of English literature, and my wife and I have watched an awful lot of BBC TV productions, and read an awful lot of English novels, and we've both been curious about some of the English foods that are always being mentioned in those works. So for Christmas I bought a number of various English foodstuffs that could be found locally and packaged them as a present, officially for my wife, but really for both of us. And I included Marmite.

My wife had been snarking about my plans to eat "that stuff made out of motor oil." I thought that unjust, because it appeared to me (or rather I assumed) from photographs that it looked more like apple butter. But on opening the jar I discovered that my wife's impression was more accurate. No, it doesn't look like motor oil, but it looks almost exactly like that heavy grease that mechanics put in a thing called a grease gun (I'm not sure if those are still in use or if they've been made obsolete by some other technology).

In accordance with instructions from actual English and Australian persons, I buttered and toasted a piece of bread (inauthentically, however, I used pumpernickel rye), and spread a thin layer of Marmite over it. I resisted the temptation to taste the pure stuff first.

I suppose it's a bit of an anticlimax that I was neither appalled nor delighted. Overwhelmingly, it is salty. As salty as tinned anchovies--which I like. I can't say I like it very much, but I didn't find it sickening, either. If you haven't tasted it: imagine anchovy paste, but with a yeasty rather than fishy taste under the saltiness. I am rather surprised that anyone ever thought to market it as a food, and even more so that he was successful.

I had asked my wife, half-jokingly, to buy me some Marmite for Christmas, so I had to tell her I'd already done that, so she wouldn't. Other than that, I didn't mention any of these foodstuffs to her. One of things I bought was lemon curd. Imagine my consternation when she announced a day or two ago that she had just seen a recipe for lemon curd and was going to try making it for Christmas. I couldn't believe it. We have been married for 34 years, and I think one small jar of lemon curd which we had bought or perhaps been given some years ago was the only time lemon curd had ever so much as been named between us. I couldn't tell her not to bother without giving away my whole plan, so I let her go to all that trouble. Well, it was delicious, and the bought stuff can stay in its jar for a while.

A few weeks ago I was thinking that this might be the last Sunday Night Journal. As in 2009, when I took a year-long break from it, I have been wrestling with the tension between producing it and doing some of the bigger projects that I have in mind. I don't quite want to give it up, though. I think I'll keep it for a while longer, but make it shorter and lighter, not try to cram serious essays into it. We'll see whether this results in any actual increase of work on those other projects.

Well, obviously I commented on the Marmite post before I read this. Maybe I'll be able to open the jar later today. We'll see.

There is a woman in our CSL group that frequently brings us English foods. I really like lemon curd.

You won't die, and you probably won't even be taken ill. I very much look forward to your report.

Maybe it’s because I’ve been forced by personal circumstances to accommodate the Commonwealth mentality, but in the four years I’ve lived here in New Zealand, I’ve tried to miss the Queen’s Christmas message. Which probably says more about my essentially cantankerous nature than anything else. Anyway, thanks to your recommendation, I’ve just watched this year’s, and it was indeed heartening -- made me a little ashamed that I deliberately avoided it when it was broadcast here Christmas night.

As to your semi-embrace of Marmite, well, what can I say other than it takes all kinds. ;-)

Sounds like your accomodation hasn't extended very far.:-) The catch with the Queen's message, of course, is that relatively few people seem to be willing to listen to the Christian part, as John Derbyshire says: http://www.nationalreview.com/corner/286664/christmas-sceptered-isle-john-derbyshire

We had some more family over today, and a couple were willing to take a little taste of Marmite. Their reaction was more or less like mine. Those who couldn't be induced (my wife remains a holdout) may, if they ever try it, be more colorful.

Well, I only got to hear a couple of minutes before I was informed that I had insufficient bandwidth to stream the program.

Did you notice, though, that the sound went up to 11?

This is quite an interesting one, too.

Indeed. Rather affecting. She was only 31 years old. Part of me is thinking "all this Commonwealth stuff is baloney in light of the reality of British imperialism," the other part wants to join.

Well, nobody is forced to join the Commonwealth, and at least one of the members was never part of the British Empire at all.

True, and for that matter I'm one of those who thinks the fact that the former colonies tend to be rather well run compared to other similarly situated countries is no accident. One could have done much worse at many points in history than to be a subject of the British Empire. But I don't think she even mentioned the Empire as the main reason for the existence of the Commonwealth, which is at least a bit of glossing-over. Which one was never part of the Empire?

The toast in the trash.

Oh, thought you were talking about the Commonwealth. Heh. Your reaction is more what I was expecting from myself. You should retrieve it and give it to your dog--bet he would love it.

Unfortunately, that is no longer possible.

Maclin, I did not think you would like Marmite. Janet, I am saddened by the lack of fortitude indicated by your reaction. We are a stoical, island race, and this is expressed in our love for Marmite. I bought a jar at Heathrow this morning.

Well, I have a small fraction of stoical English blood, but it was my 50 % Italian that reacted. AMDG

I think I should get some credit for stoicism and fortitude for not not liking it, though my pretty-much-all-British blood did not propel me all the way to liking.

I've never tried Marmite, and don't intend to, but I would like to wish you a merry Christmas. (I am back from vacation today, and catching up.)

NB, I am very glad you are not wrapping up SNJ.

A sister-in-law who lived in England for a few years sent us Marmite once. After an initial taste of it spread thinly on toast, we doled it out on a spoon as a punishment to disobedient children. It was a strong deterrent against sassiness.

Very good! I'll take it to my daughter.

I just listened to the Queen's Christmas message and was very pleased with it.

I feel rather sad that the Marmite has not gone down well, Maclin. At least, I'm assuming it's not vastly different to vegemite, which I certainly like. I don't think I've had Marmite since I was a very young chid. Yes the "-mites" are salty. Nom nom nom...

I tried it again yesterday. It was not very good but that was partly because of the bread. I'll finish this jar but probably won't buy another. It was no doubt my imagination that made me think the B-vitamins were doing me good.

Craig, aren't you under under some obligation, as a citizen of the Commonwealth, to at least attempt Marmite? Merry Christmas to you, too, and Happy New Year.

Better watch out, EmilyJ--one of those child-protection agencies might look pretty harshly on that practice.

Re the SNJ, ex pat: thanks, and I'm probably going to make it more like a journal, sort of like this week's. If or rather when I feel the need to write an essay, I'll do it on a looser schedule. But the trick, for me, will be to prevent "looser schedule" from turning into "never."