Light On Dark Water
Home Archives About
Never let it be said...
The Left-Wing Theocratic Fantasy

Someone in my department at work is leaving us for another job, and Thursday was her last day, so we took her out to lunch. Elimination of places that either weren’t open or were too far away or weren’t to someone’s liking sent us to Red Lobster, a restaurant I used to like before I moved to the coast, but haven’t been to for many years. On a sudden whim, I decided to order fish and chips, mainly out of curiosity to see what I would get. I’d like to try authentic English fish and chips, but the attempt to find them here is a little absurd, because I have no way of knowing how close anything served here is to the real thing.

The waitress was somewhat on the grouchy side. When I said I wanted fish and chips, she replied “Chips or fries?” This completely flummoxed me for a moment, because, as everyone knows, What We Call Fries the English Call Chips. It was as if she had asked me whether I wanted ham or chicken in my ham sandwich. And the description in the menu said the dish consisted of fish and fries.

All I could manage to articulate in reply was “I thought fries came with it.” And her sarcastic reply was “Chips or fries. That’s why I asked the question. We make our own chips out of—”

“Fries,” I said, cutting her off and handing her the menu.

I guess she realized she was being unpleasant, because she was a lot nicer after that. But it was remarkable how the exchange continued to rankle me. I thought of it several times in the course of the afternoon, and when I did I felt a degree of anger way out of proportion to the incident. She had treated me as if I were stupid, which was bad enough, but what I really couldn’t stand was the fact that I had failed to show her, not to mention my co-workers, that she was wrong. I re-enacted the dialog in my mind, this time ending it with me saying something like You’re acting like I’m stupid, but actually you’re the stupid one.

In short, she had injured my pride, and I suppose that’s a good thing, especially in Lent.

The fish and fries weren’t especially good, either. But for all I know they were exactly what you would get in England. I’d like to think not, because the fries were the usual fast-food type, not actual slices of potato.

One side effect of the invention and development of photography is that it’s almost impossible for many people, maybe most, to resist entirely the idea that the world really looked as it does in old photographs. The late 19th and early 20th centuries were black and white or sepia, and people mostly stood still with grave expressions on their faces. The ‘20s through the ‘40s were less grave, but still monochrome. There were no colors in the world until the 1950s, and even then the colors were faded and everything a little blurry. A lot of movies and TV shows have reinforced this irrational but powerful impression by making any depiction of those times resemble the photographs to some degree. We know it’s a false impression, but we—or at least I—have to make a conscious effort to shake it off.

My mental image of the ‘30s and ‘40s is especially affected by this syndrome. Maybe it’s because I’ve seen enough movies made fairly recently but set somewhere between 1880 and 1930, in which the colors are depicted realistically, to get the impression out of my head. And maybe it’s partly because I watch a good many movies made in that period, and they’re almost all in black and white. Anyway, I was happy to stumble across a wonderful gallery of color images from those days made available online by the Library of Congress. Clicking on the picture below will take you to the gallery. The colors are mostly pretty subdued, sometimes to the point where you would say they're only sort of semi-color, but still, the images are useful for dispersing that monochromeness. 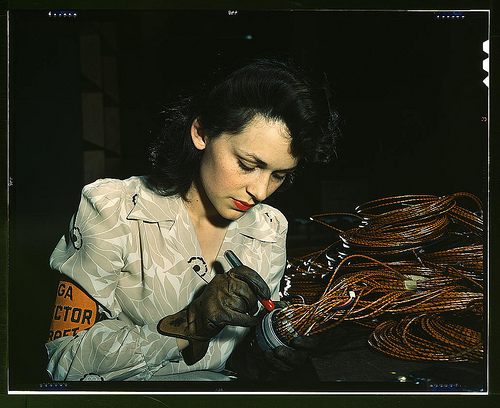 Maybe you’ve noticed that I haven’t posted a weekend music video for a while. That’s mainly because I’ve cut way back on music for Lent. I gave up pop music entirely, and haven’t listened to very much classical. As Simcha Fisher notes, Lent does not exactly rank with Christmas as an occasion for beloved music. But she has a set of very good pieces , one of which I’m going to insert here:

And for today, the feast of the Annunciation:

It's hard to believe that picture is that old. It's so brilliant and so distinct.

We have a couple pubs here in town that do a good, fairly authentic fish and chips, according to a friend who has spent many years in England. Generally, I've found that chain restaurants don't get it right.

I wouldn't know, obviously. Though if this was authentic, authentic is sorta bland. The fish was ok, the "chips" were just typical chain-restaurant fries, maybe a little below average.

Oh, and about the picture: just for comparison, I turned it back into black and white.

I've actually had Red Lobster's fish and chips -- they're passable but not the real deal.

It still has a clarity that you don't find in most old pictures.

I'm wondering if that's because they're slides. Most of the pictures in that set are surprisingly crisp. I don't know if color slides preceded color prints or not.

I shall ask my husband who knows all that kind of stuff.

Thanks for sharing the link to those color photographs. Have you seen this one hundred-year-old collection from Russia? Amazing! It looks like some were taken just yesterday with a digital camera.

Yes, I had seen those a while back and thought about posting them along with these '40s pictures, but couldn't remember where I had seen them. So thanks for pointing them out to me again. Pretty amazing.