That, as everyone who's read The Lion, the Witch, and the Wardrobe knows, was the woeful situation of Narnia under the rule of the White Witch. And it's probably one phrase everyone who reads the book remembers. It's a brilliant way of capturing in a few words the significance not only of Christmas but of the entire cultural presence of Christianity, because the idea of a winter without Christmas does seem terrible, even without the hopeless additions of "always" and "never." (And it's unfortunate that it doesn't really work for people in the southern hemisphere.)

I've always lived in fairly warm climates--well, barring one winter in Denver--and since 1990 have lived in a subtropical one. Winter here is only chilly and drab, not cold and bleak. We don't even lose all of our greenery, and camellias bloom wildly: reportedly the nuns who arrived in mid-winter to found the Visitation Monastery in Mobile were misled by the camellias into thinking they had come to a hospitable climate. But nevertheless it is a dull season, and if it never ended one would eventually despair.

The modern world is trying to rid itself of Christianity, and achieving some success. But the more it succeeds, the more it reveals that the loss will only leave it bleak, angry, and embittered. If over many generations the very memory of Christianity should disappear altogether, something like pre-Christian paganism might emerge. But, as many have observed, a post-Christian society is a different beast altogether. Cold is one of its attributes; empty is another. Oh, it certainly has plenty of sensual and emotional warmth. But it remembers that it once believed that these things were real and eternal, and now it believes that they're only a side effect of matter rattling around in an inconceivably large, empty, and cold space: a sort of friction, perhaps, producing us and our loves and dreams as flint and steel produce sparks which flame for the barest instant before returning to the cold from which they came. And so the chill of those spaces seeps into its heart.

It would be one thing to live in a land where it's always winter and always has been and there has never been any such thing as Christmas. It would be quite another to live in that land with the memory of Christmas. The former circumstance might make you a cold-hearted brute, but the latter could drive you mad.

A couple of years ago I wrote about the way I felt, as a child, about the merely secular approach to Christmas--you can read that post here. I sense that more strongly with each passing Christmas. And there's a struggle within me as well. This Advent I've been even more busy and distracted than usual. I've hardly thought about Christmas, and my observance of Advent didn't amount to much. The signs of Christmas have left me almost completely indifferent, and the need for thinking of presents and family gatherings has seemed more a bother than anything else. I've even found myself wondering if I'm becoming one of those people who really doesn't much like Christmas. But I'm not. All I have to do to correct that impression is to imagine the world without it.

A couple of weekends ago my wife and I took two of our grandsons with us to buy a tree. We ordinarily wait until a few days before Christmas before buying our tree, but we wanted to take the boys, and for complicated family scheduling reasons it looked like that might be the only weekend where it worked out. So off we went to Fish River Trees, where we've bought our Christmas tree for some years now. Sometimes we cut it, and sometimes we bring home a living one and plant it after Christmas, but we've pretty much run out of space for new trees now, so this year we cut one.

The farm is a commercial enterprise, obviously, and it features as much Christmas hokum as any such. Well, no, that's wrong: it features more Christmas hokum, because it's entirely Christmas-oriented. By hokum I mean Santa Claus stuff, snowman stuff (in a climate which might see a very light dusting of snow every 20 or 30 years), candy cane stuff, a Christmas-themed "train"--trailers pulled by a disguised tractor which half-choked us with its exhaust--that sort of thing. Sometimes that stuff gets on my nerves a little, though I always enjoy the process of finding the tree and bringing it home and am glad every year that I did it, even if I wasn't enthusiastic at first.

This year there was something new; also, perhaps, a bit of hokum, if you in turn are a bit cynical. It was a nativity scene, with nearly-life-size figures situated in a simple wooden structure, and a few live animals wandering around the enclosure: a couple of donkeys, and, representing the bovine family, a rather intriguing species of cattle bred for the Scottish highlands, much smaller than ordinary cattle and having an extremely thick and shaggy coat. The figures in the scene were plastic, and no more realistic nor affecting than you might expect. Yet I found it touching. Not only was it a direct statement of the Christmas story within the commercial Christmas that usually slights or ignores it , but the presence of a stable (more or less) of rough wood, and of live animals with their heavy warmth and rough coats and their smells brought a flavor of reality to the scene. It's good for children, most of whom nowadays never encounter any animals except dogs and cats, to see what an ox and an ass are really like. And it was good for me: having spent a great deal of time around cattle when I was growing up, I find the smell of a barnyard rather homey and comfortable, if not precisely pleasant. To be around animals is to be forced--well, at least to have the opportunity--to consider what it means that our flesh, as the old translations have it, and all flesh, shall see the glory of God.

And I'm also forced to consider what the absence of the hope of redemption means, the direction in which western civilization seems to be headed: always winter, but not even never Christmas, because Christmas itself is no longer conceivable, replaced by a wan "holiday" evacuated of any significance beyond the need of human beings to huddle together for temporary warmth against the everlasting cold and darkness. 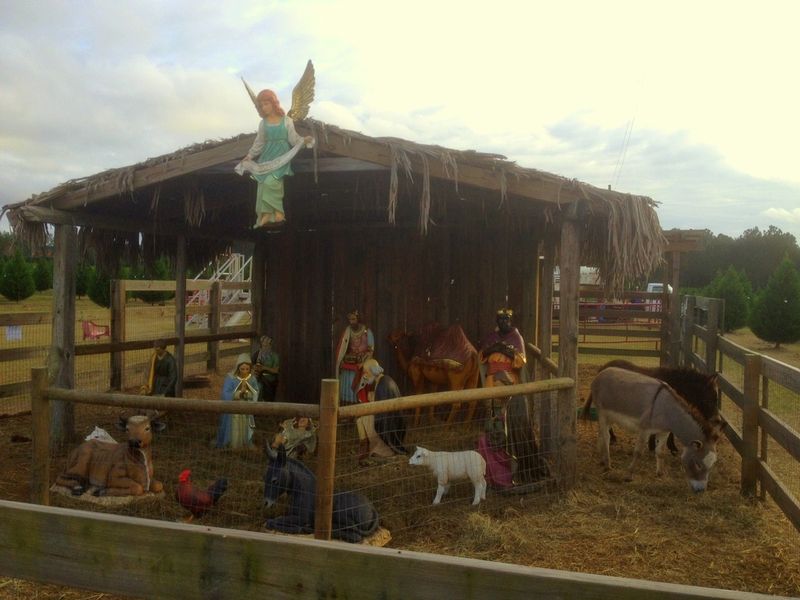 Thank you, that's a compliment. It's been a long time since I've used a Mac, but I think the "command" key functions like the ctrl key in Windows, with the same letters--command+a = select, command+c =copy, command+v = paste. Or is it the "option" key?

I think I'll spread this around.

I actually don't remember how I did it! I just kept pressing different keys tip it posted on FB!

Modern culture seems to be looking for a world in which it's always Christmas but never winter.