Joe Pug: Bury Me Far From My Uniform

Be warned: this is an emotionally intense song.

I've seen this referred to as an anti-war song, and implicitly it is, but it's more personal than political, not a statement but a picture of an all-too-real human situation. Pug himself said:

The song nearly wrote itself and yet I released it with great reluctance.  There is a certain reverence that any decent person affords soldiers and their sacrifices. I was, and remain still, troubled that this song might violate that decency.  Having never served myself I’m not always sure whether it is inspiring or insulting. I’ve certainly gotten my fair share of both reactions.  In the end, the song stands on its own, and the distinction is yours to make.

The fact that he gave the song away in honor of Memorial Day (2010) certainly speaks to his honest intentions.

Sometimes Google's auto-suggest feature produces interesting, amusing, and even vaguely poetic results. The other day I was looking for the blog What's Wrong With the World, which I read occasionally but haven't bookmarked, and this was Google's attempt to be helpful (click on the image to enlarge it): 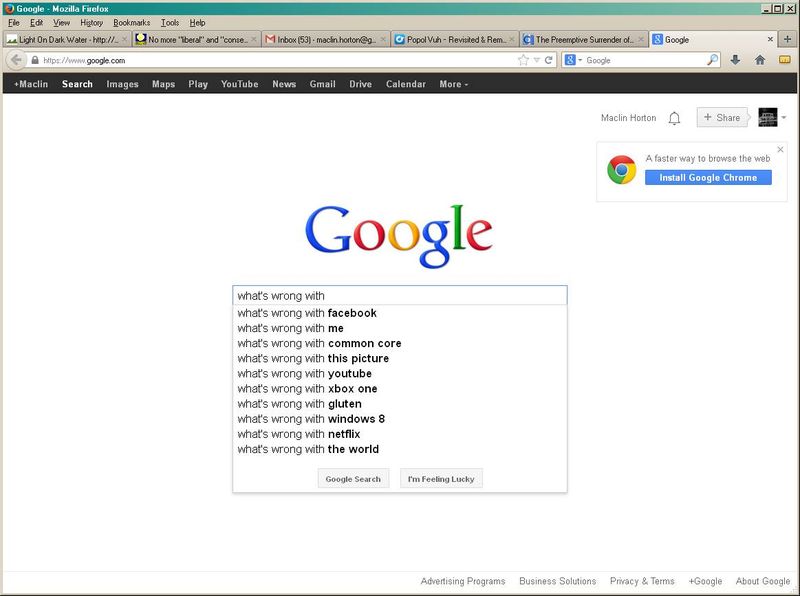 As I began to type "the," "What's wrong with the world?" moved up in the list. 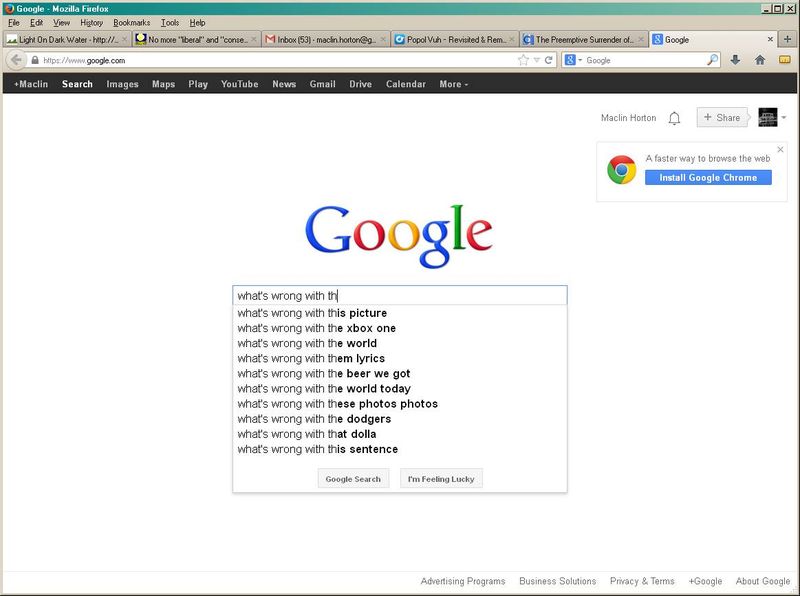 I'm a little puzzled by some of those and am guessing that "What's wrong with the beer we got?" is a song title.... Oh no--it's an Alabama state legislator.

Actually I don't recall that legislation having anything to do with German immigrants but rather with the general interest in higher-quality beers than Budweiser etc.; the bill permitted the sale of beer with higher alcohol content than the standard 4% or whatever it is.

The guy at xkcd seems to have done a lengthy investigation using queries beginning with "Why." You can see the result here.

I should warn you not to start playing with this. It's very addictive.

James Kalb: The Tyranny of Liberalism

This is not a review, because I'm only on page 68 of this book. But I can't resist quoting from it. So far it seems to be the most incisive and thorough critique of liberalism I've seen. It's plain that liberalism, the doctrine of maximum freedom for all, is in fact exhibiting a paradoxical drift toward tyranny. And this book explains a great deal about what's happening, and how and why it's happening. I find myself wanting to quote great sections of it. But here's a taste. I'm sure I will be posting more excerpts.

So dominant is liberalism that it becomes invisible. Judges feel free to read it into the law without historical or textual warrant because it seems so obviously right. To oppose it in any basic way is to act incomprehensibly, in a way explicable, it is thought, only by reference to irrationality, ignorance, or evil. The whole of the nonliberal past is comprehensively blackened. Traditional ways are treated as the simple negation of unquestionable goods liberalism favors. Obvious declines in civility, morality, and cultural achievement are ignored, denied, or redefined as advances. Violence is said to be the fault of the persistence of sex roles, war of religion, theft of social inequality, suicide of stereotyping. Destruction of sex and historical community as ordering principles--and thus of settled family arrangements and cultural forms--is presented as a supremely desirable goal. The clear connection among the decline of traditional habits, standards, and social ties; the disintegration of institutions like the family; and other forms of personal and social disorder is ignored or treated as beside the point.

(Thanks to Rob G for having recommended the book to me some time ago.)

Obamacare is a bonanza for lobbyists.

...the United States is a large and undisciplined country and includes far too many people who would see the system only as something to be exploited. And I don’t mean only the sort of shiftless people who always exploit welfare, social security, etc. as recipients—I mean doctors, lawyers, corporations, and bureaucrats who would approach the system as vultures would approach a big dead pig, and probably be much greater abusers, in terms of sheer dollars, than the mere dishonest recipients.

--me, four years ago

I didn't specify "lobbyists," but clearly they fit that general prediction.

The Drudge Report linked to this with the text "MSM Scrambles to Distinguish Syria from Iraq." Indeed. It's true that there are signficant differences, at least as of now, but they seem to be mainly of scale: Obama seems to want a mainly symbolic intervention, where Bush was deadly serious. But the reaction of Obama's media supporters is...well, just what you would expect.

"This material may not be published, broadcast, rewritten or redistributed."

The Rite of Spring As It Really Was

I can't let 2013 go by without noting the 100th anniversary of the performance that came to be viewed as Day 1 of the era of modern art. It wasn't really that, of course. Schoenberg's much stranger Pierrot Lunaire had been performed more than six months earlier, and cubist painting had been under way for several years. But it became a sort of mythological event, like the quarrel between Galileo and the Church, marking the beginning of a period when modern art became something shocking and difficult, frequently very consciously so.

Laura Jacobs published this retrospective in the May issue of The New Criterion, which provides a lot of fascinating detail about that first performance. Toward the end of the piece she mentions the reconstruction of the ballet staged in the 1980s by the Joffrey Ballet, which was said to be about as close as we could hope to come to the original. I saw it on TV at the time but couldn't remember much about it, other than that it was all very un-ballet-like, and that it reminded me of what is often represented as American Indian dancing. Jacobs mentions that it's on YouTube, so I went looking for it. Here it is, in three parts, each ten minutes long.

(There is also an all-in-one copy of the video, but it seems a bit dim compared to the ones above.)

This time around I found it very powerful. I don't know exactly what's going on in most of it, but you don't really need to know anything except that it's a ceremony marking the beginning of spring in pre-Christian Russia, and that it culminates in a maiden dancing herself to death. I always understood why the music created a sensation, and now I see why the ballet did, too. I don't know whether this strange stiff stomping and jerking had any precedent in ballet, but it must have been quite a shock to anyone who went in expecting traditional ballet and was met with something that, as Jacobs says, "was called a ballet, but...did not attempt to dispel or transcend gravity as classical ballets were expected to do; instead, his dancers bowed down under a cosmic weight, burdened by it and in awe of it."

I must say, too, that it strikes me as evidence of a cultural sickness. The music is a great work of art, and I've loved it since I first heard it in college. But this attempt, in which Stravinsky and Diaghilev and Nijinsky were certainly not alone, to regain some kind of authenticity by reaching back to a brutal past, was not an indicator of cultural health. It bespeaks a weariness with the whole idea of civilization. Those who were shocked may have been shocked for the wrong reasons, but it does seem now an indicator of something amiss. I want to say this carefully, being very clear that I do not think The Rite has anything to do with violent movements such as Nazism, or was in any sense a cause of them, but it is really not surprising that a civilization which was weary of itself and feeling, in the highest reaches of its culture, the call of the primitive might begin to develop, in the political realm, an attraction to actual violence as a means of escape from and destruction of a sterile order.

Several years ago my friend Robert sent me a CD of the Chopin Ballades played by Krystian Zimerman. It disappeared among a welter of home-burned CDs that I was having a lot of trouble keeping track of, and then was forgotten, until Robert mentioned it to me a few weeks ago. I found the disk and listened several times to the first three ballades (there are four). They're wonderful.

I didn't previously know this music. Not being a connoisseur of piano playing, I can't compare Zimerman's version to others, but it is certainly very good, and the recorded sound is magnificent.  I'll have to buy the CD now.

So far Ballade #2 is my favorite. It might be just as well not to watch this video, as to my rude eyes Zimerman's looks and mannerisms seem almost like a philistine parody of the classical musician from the days when "longhair" meant intellectual and aesthete. Zimerman was born in 1956, so I would guess this video is from sometime in the 1980s. (Yes, 1987, apparently.)

The Spambot that Discovers Helpful Information in Very Unlikely Places

"kidney impaired function" says "This genuinely answered my own problem, thank you!"

Of course I'm always happy to help, but the post was about the Zimmerman-Martin case.

No more "liberal" and "conservative" Catholics?

Time continues to speed up unacceptably. And yet I am obliged to accept it. I thought it was about three weeks ago that pasted the URL for this piece on America's web site into a blog post template intending to write about it later. Actually it was almost two months ago, on June 28.

But anyway: I've never found America very interesting, and in fact found it sometimes annoying. But I applaud this decision to stop using "liberal" and "conservative" as qualifiers for "Catholic." Many years ago I read a remark by Henri de Lubac in which he said something to the effect that insofar as these terms refer to anything more than types of personality, both valid and necessary, they have no place in discussions within the Church. (That's how I remember it; I'll try to find the actual statement.) It's stuck with me because I thought it was true.

As some of the commenters on the America piece point out, even if you decide not to use the words, the reality remains--there are liberal and conservative Catholics, even if you're speaking only with reference to the Church, not politics. And that's true. But I think the effort to avoid them is worthwhile. It might force one, even when the topic seems to demand that sort of distinction, to focus on the subject, and not bring in loaded terms which inevitably conjur up all sorts of associations and implications which needn't be involved.

Above all, regardless of the terms, we need to avoid thinking of the Church in factional terms, which makes it nearly impossible not to see some as more Catholic than others. That, too, may be justifiable sometimes. But we shouldn't start there. We shouldn't look for signals that someone is of a certain faction, and then use that as a reason to discard anything he says. We should start with the assumption, and keep it until or unless there is some reason to think otherwise, that those who disagree with us are faithful and have the best interests of the Church at heart.