To reject no idea and no good intention, however awkward or feeble.

A Benefactor of Mankind

I love this stuff. Happy Thanksgiving, everyone. 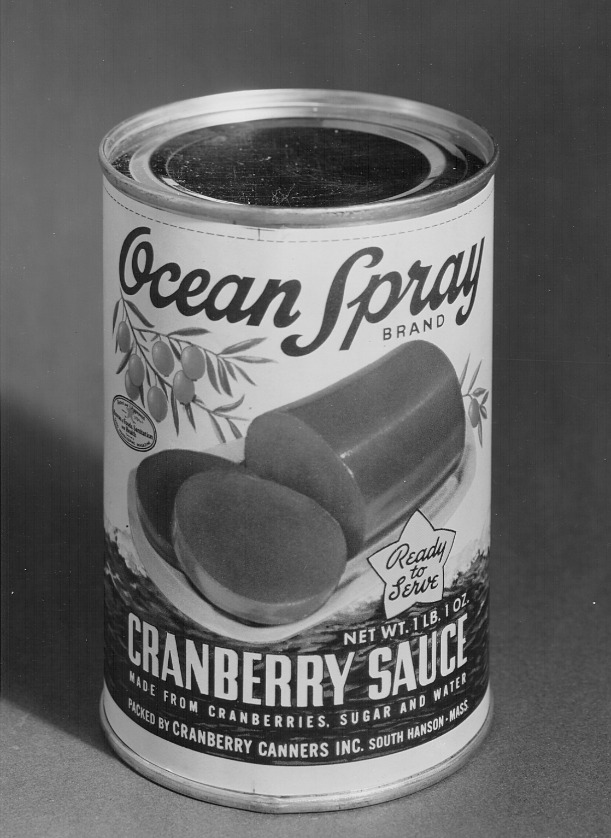 The story is actually pretty interesting from the socio-economic as well as the gustatory perspective. I didn't know that Ocean Spray is and has been from the start a growers' cooperative.

This Is Not My Opinion Of Evangelii Gaudium

So, Pope Francis has published an "apostolic exhortation," and I see indications that the Catholic blogosphere is lighting up with comments about it. And I'm tempted to skim the thing as quickly as possible and deliver some quick comments of my own. But I'm going to resist that impulse. This thing is about 50,000 words long, and presumably the pope put a good deal of thought into it. I think it deserves an equally careful and thoughtful reading. So maybe in two or three weeks I'll have something to say.

I expect a certain amount of the commentary, both from within and without the Church, will involve the deployment of selected passages as weapons against enemy factions within the Church. I'm not going to do that. It requires no particular virtue on my part to refrain from it, because the temptation is very weak. Much stronger is the temptation to react to those who do. I'm going to make an effort not to do that, either, although that will be more difficult. I mention it because having said this publicly will help me to resist the urge. I don't think it's useful or spiritually healthy, and I don't think it's what either the pope or God wants.

Here is the text, in case you haven't already seen it. I note with a bit of amusement that one section is called "No to warring among ourselves."

Walker Percy, thou shouldst be living at this hour

This appeared one day last week in Dear Abby:

DEAR ABBY: I read the obituaries in our local newspaper every day to see if someone I know has died. But when I don't see any familiar name, I feel let down and disappointed. Is that weird? -- STILL ALIVE IN SAN DIEGO

Here's the heading for number 9 in the series of self-help questions posed in Walker Percy's Lost in the Cosmos:

(9) The Envious Self (in the root sense of envy: invidere, to look at with malice): Why it is that the Self--though it Professes to be Loving, Caring, to Prefer Peace to War, Concord to Discord, Life to Death; to Wish Other Selves Well, not Ill--in fact Secretly Relishes Wars and Rumors of War, News of Plane Crashes, Assassinations, Mass Murders, Obituaries, to say nothing of Local News about Acquaintances Dropping Dead in the Street, Gossp about Neighbors getting in Fights or being Detected in Sexual Scandals, Embezzlements, and other Disgraces

DEAR STILL ALIVE: People read the obituary section for various reasons, including the fact that some of the deceased have lived very interesting lives. Some do it hoping they won't find their own name listed. If they see the name of an acquaintance, they may feel sadness at the loss or sympathy for the family, knowing each death leaves a hole in someone's heart. But to feel "let down" seems to me like a lack of empathy, and in my opinion, it is weird.

Which I think Percy would also have enjoyed.

I saw these guys in concert Tuesday night. Most enjoyable. This was their encore.

The most striking thing they did--not the best, but the most unusual and attention-getting--was a piece in which they did things to their guitars that made them sound like a gamelan orchestra. Yes, really. Mostly it seemed to involve affixing objects to their strings.

Of course the guitars didn't produce anywhere near that range of sound, but really, there was enough of a resemblance as to seem almost uncanny.

On the Wrong Side?

Dick Cheney's daughters are feuding because one of them is a lesbian who has a "wife," and the other believes marriage requires two people of opposite sexes. The former says the latter is on the wrong side of history.

It's a charge one hears pretty frequently. I can imagine few things less likely to make me switch sides in a controversy than the admonition that I am on the wrong side of history.

It puzzles me that it should even be necessary to point out the problems with this argument to any moderately intelligent person. It really means nothing more than "you're on the wrong side," period, since history has not yet spoken and in any case does not have the last word. A Google search for the phrase turns up mostly progressive, but a few conservative, invocations of it, and also this amusing objection at the Intercollegiate Review.

Posted at 12:05 PM in Current Affairs, Politics, State of the Culture | Permalink | Comments (7)

Because, remember, you get what you pay for

Read the excerpt from the Dear Abby piece at the top of the page. (Click to enlarge if you can't make it out.) "To Force Its Will On the Opposing Nations"

The more I think about the conclusion of that "Eleven Nations" piece (see previous post), the more it bothers me. What makes it so troubling is that it envisions no other outcome to the national conflict than having one side crush the other.

This reveals something about the thinking of contemporary liberals. I doubt you would find many people in Alabama or Texas who are seriously exercised about the abrogation of second amendment rights in Chicago, New York, Washington D.C., and many other areas of the country. People in the savage provinces might think those policies unwise and unjust, and that in the abstract everyone in those cities should have the same right to bear arms that they do. But they don't really care very much. What they will get exercised about is an attack on their own rights, which the gun control movement is, because it seeks to change the understanding of the second amendment, thus affecting everybody.

The same is at least somewhat true with regard to the deeply divisive social issues of abortion and same-sex marriage. Pro-lifers believe that abortion should be illegal or mostly illegal everywhere. But it was the Supreme Court's insistence that it must be allowed everywhere that made the movement the powerful thing it has been, and insured that the nation remains as deeply divided on the question now as it was in 1973. Had the states that wished to outlaw abortion been allowed to do so, the matter would not be nearly as inflamed, and politicians would not have been able to exploit it as they reliably do in every national election. Similarly, people in  Georgia who oppose same-sex marriage might not be pleased that California allows it, but they wouldn't really care that much if they didn't know that the proponents clearly believe that it must and shall exist in the entire country.

In contrast, present-day liberalism feels that a Christian prayer at a high school graduation in a small Mississippi town is a threat to freedom everywhere, and must be stamped out. Liberals, for all their chanting of the word "diversity," really don't want to allow much of it where something important to them is concerned. They see these questions as matters of fundamental right and wrong, and tolerance of the wrong as an unacceptable compromise with evil.

Even if we grant that the noisier element on the right gives the impression that it would like to force its reactionary will on everyone, the fact is that it has no plausible means of doing so, while the imposition by the courts of liberal prescriptions on everyone is a present reality. I've thought for many years that recourse to federalism would be the only way of preventing our deep divisions from paralyzing and perhaps destroying the country. But liberalism really has no use for it, except occasionally as a means to get a foot in the door for some innovation.

Daniel Lanois: Falling At Your Feet

That's so good--let's have another from the same album, Shine, this one with Emmylou Harris.

This has been getting some attention for several days now: a sort of cultural map of the U.S. based on the varying cultures of origin of current inhabitants. The first thing I noticed is that it conforms to what I was saying in a discussion with Art Deco a few weeks ago about the culture of the region including north Alabama and Tennessee.

In naming Vanderbilt as a university located in the Deep South, I asserted that if northern Alabama is in the Deep South, then so are the neighboring regions of Tennessee. Or, conversely, if those parts of Tennessee are not in the Deep South, then neither is the part of north Alabama where I grew up. As you can see, this map draws the line between Greater Appalachia and Deep South well south of the Alabama-Tennessee line. Call the regions what you will, there is a noticeable cultural similarity, at least in some classes, among people living in north Alabama and as far north as southern Indiana. 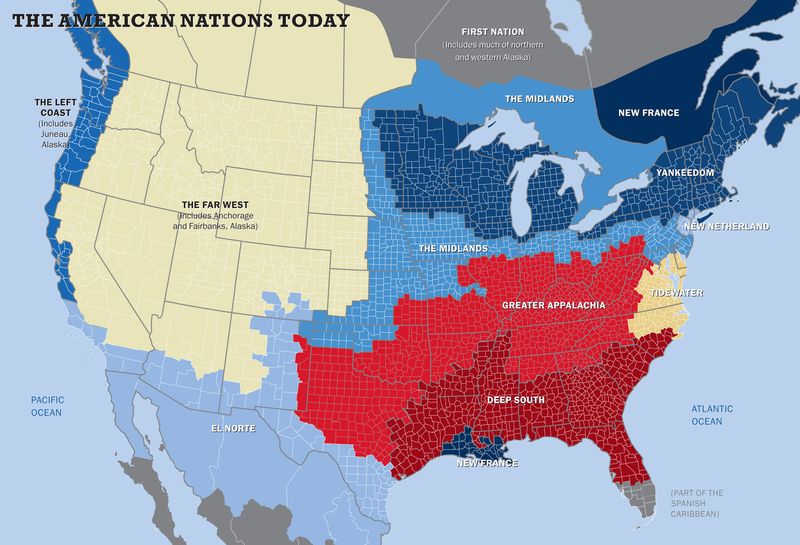 Any exercise of this sort can only be taken as an extreme generalization. Still, with that in mind, I think there's something to it.

The analyis, at least as represented in the accompanying article, is concerned only with regional differences in attitudes toward violence, and though the author seems to be trying for detachment is clearly written from a liberal point of view. It's pretty clear that the southern region is to be considered backward if not crazy.

One possible lesson that might be drawn from this is missed by the author, though he states the premise:

With such sharp regional differences, the idea that the United States would ever reach consensus on any issue having to do with violence seems far-fetched. The cultural gulf between Appalachia and Yankeedom, Deep South and New Netherland is simply too large.

The conclusion I would draw from that observation is that, given the deep differences among the regions, a great deal of latitude in ordering their own affairs ought to be accepted, and that an attempt to impose uniformity on the entire nation would a big mistake, and bound to cause more trouble than it prevents, not only in relation to the problem of violence but to many other disputes. Unfortunately that is not the conclusion the author draws, but rather:

The deadlock will persist until one of these camps modifies its message and policy platform to draw in the swing nations. Only then can that camp seize full control over the levers of federal power—the White House, the House, and a filibuster-proof Senate majority—to force its will on the opposing nations.

This is unwise. And, I might say, a characteristic northern mistake.