The library should know better than to let me keep books for a year (because I taught a few courses some years ago and therefore qualify as faculty). It just means that I keep them for over a year. I've now had The Letters of Caryll Houselander since December 21, 2012. Great book, no wonder I don't want to give it back. But I probably wouldn't have gotten it back on time even if I hadn't liked it, because I'm just shiftless.

The Launch of the Thurible

What excitement we had at Mass yesterday! At the recessional, priest, acolyte, and thurifer headed down the aisle, singing, along with the little congregation, "God Rest Ye Merry, Gentlemen," led as usual by the acolyte, who has the strongest voice.

The thurifer, a seminarian whose identity I won't publish, is, along with the priest, a great enthusiast for incense, and fills the church with great clouds of it. And he also swings the thurible with enthusiasm: with so much enthusiasm yesterday that as he recessed down the aisle he was whirling it in a great circle.  Perhaps you've seen this done--apparently it is a permissible maneuver. I was unable to locate a YouTube video, but it involves swinging the thurible not just in a low arc but in a full vertical circle.

The thurible being made of heavy brass, this puts a good bit of strain on the apparatus. It came apart. The lower half of the thurible parted company with the chain. It flew down the aisle, trailing hot coals and burning incense. Priest, acolyte, and thurifer, in full vestments, and still attempting to sing, scrambled to put out the little fires now smoldering up and down the carpeted aisle.  I really tried to get through to the last "comfort and joy," but I was just laughing too hard.

Tragically, there is no video of this event. Only a few blackened holes in the carpet remain by way of physical evidence that it occurred. But we have our memories.

Proust on the Law Written In Our Hearts

I ran across a 50-cent copy of Randall Jarrell's Poetry and the Age a while back, and have been reading it a little at a time. He closes the first essay with this quotation; I mention that because I think it would be dishonest for me to leave you thinking I've read Proust:

All that we can say is that everything is arranged in this life as though we entered it carrying the burdens of obligations contracted in a former life; there is no reason inherent in the conditions of life on this earth that can make us consider ourselves obliged to do good, to be fastidious, to be polite even, nor make the talented artist consider himself obliged to begin over again a score of times a piece of work the admiration aroused by which will matter little to his body devoured by worms, like the patch of yellow wall painted with so much knowledge and skill by an artist who must for ever remain unknown and is barely identified under the name Vermeer. All these obligations which have not their sanction in our present life seem to belong to a different world, founded upon kindness, scrupulosity, self-sacrifice, a world entirely different from this, which we leave in order to be born into this world, before perhaps returning to the other to live once again beneath the sway of those unknown laws which we have obeyed because we bore their precepts in our hearts, knowing not whose hand had traced them there--those laws to which every profound work of the intellect brings us nearer and which are invisible only--and still!--to fools. 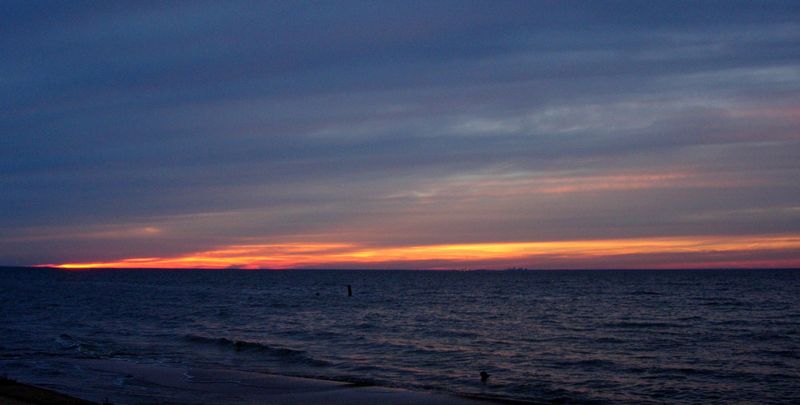 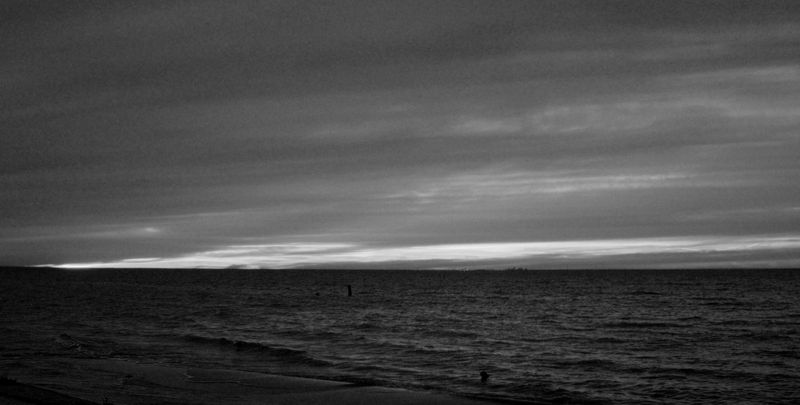 I tend not to like jazz reworkings of Christmas carols. There's almost always a kind of levity that either borders on or crosses over into irreverence. And for that matter I'm not fond of classically-trained voices singing anything except classical music. But this seems an exception on both counts. A friend sent it to me, and she seemed to have the same basic reservation that I do, but added that "they perform it with reverence within that genre." Just so. At least Kathleen Battle does. Marsalis mostly does, but I could do without the wah-wah stuff.

This is a carol I did not know until fairly recently but have come to love, by way of this King's College recording, which I think I've recommended before. It's an inexpensive two-disc set of wonderful performances of most of the best-known and some lesser-known carols, plus a Vaughan Williams "Fantasia on Christmas Carols" (which is the last thing in the set and which I confess I haven't really listened to). The recordings are from the early '60s, so not up to contemporary sound quality, but still very good. You can find the words here.

If you don't know Britten's A Ceremony of Carols, you should. It's a selection of Middle English poems related to the Nativity, set to music. Here's a performance of the entire piece.

And here is something I posted a few years ago, a sort of recipe for a very tasty holiday drink. I said then that it was the first and probably only recipe I would post, but I actually have another invention which I will post when the weather is warmer, as it's a very summery kind of drink. (Yes, drink; you can see what interests me in the kitchen.)

Big Around As A Washtub 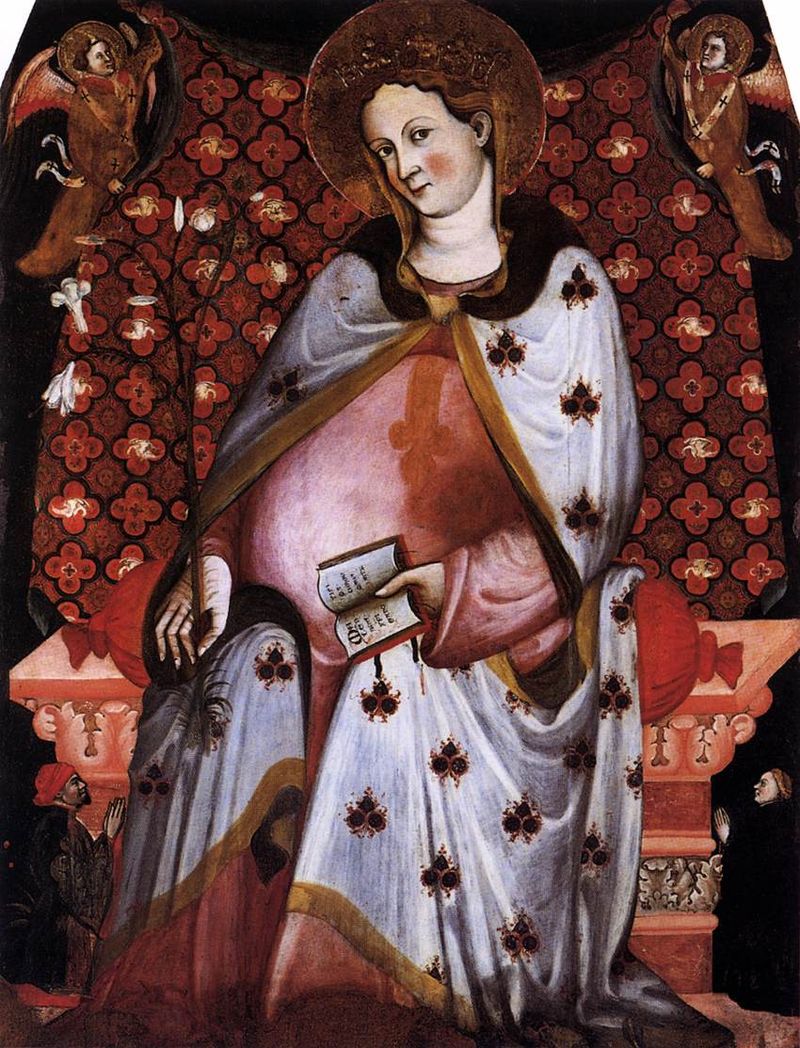 I hope Our Lady would take the title of this post in the affectionate tone in which I first heard it, which was from the lips of a college teacher in reference to his own wife's gravid condition. She was within earshot, if I remember correctly, and seemed to be more amused than not.

This painting is on the cover of this month's Magnificat, and I found it startling. I don't think I've seen another picture of the pregnant Mary that's quite so...pregnant. And I think it's good to be reminded of the elemental physicality of her condition, which sometimes gets missed in the devout respect shown to her, and especially as it would have been two days before the Birth. I would hope the homely comparison would have amused her as it did my teacher's wife (I think).

It occurs to me that many people today may not have seen a washtub. Here's one in operation (picture lifted from an interesting-looking blog called Old Picture of the Day: 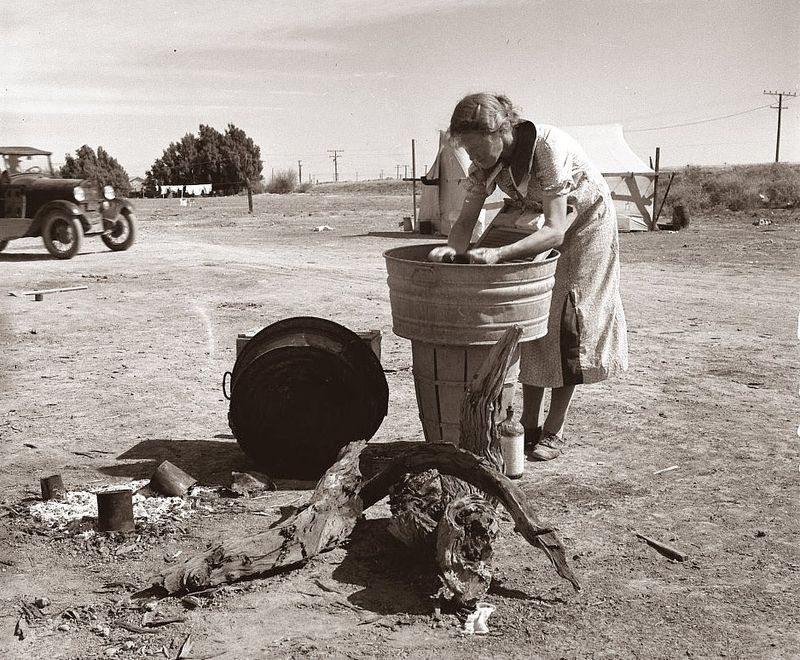 Three That Are More Than Period Pieces

I'm not making any great claims for this noir-ish drama, but I think it's surprisingly good. I almost deleted it without watching it, and I'm glad I didn't. It stars Mickey Rooney as a mechanic who drives race cars on weekends. There isn't much in his life apart from cars; he lives alone in a rented room, and is a bit of a misfit at work, with little or no experience with women. A couple of crooks decide he's the driver they need for a bank robbery they're planning, and convince the girlfriend of one of them to lure him into the job. He falls for her, she begins to regret the deception. It's a genuinely affecting story, and Mickey Rooney does a really fine job. The beauty is played by Dianne Foster, of whom I hadn't heard before, and she is indeed a beauty, and also a good actress. 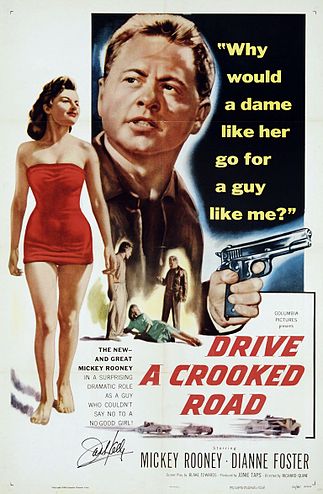 Part way through this one I found words like "masterpiece" running through my mind. In the end I don't think superlatives of that order are justified, but it's still very good, and something anyone who likes Alec Guinness really should see. He plays a double role, sort of a nice guy and his evil twin. AG1 is John Barratt, an umarried teacher of French at "a provincial university" in England. On holiday in France he encounters AG2, Jacques De Gué, a wealthy Frenchman and a scoundrel. De Gué substitutes Barratt for himself, planning to exploit the fact that there are now two of him to commit a crime. Barratt suddenly finds himself in possession of great wealth, a chateau, a wife, a child, and a mistress.

It's a bit of a struggle to ignore the huge implausibility of this, but if you can manage it you get a fascinating hour or so of Barratt trying to accept the situation, and then to remedy what he begins to realize is his double's mistreatment of everyone around him. What prevents the movie from attaining that "great" status I was considering for it is that it fails to develop some of the more interesting aspects of Barratt's situation--for instance, the religious elements that appear briefly--and it ends too abruptly. In general I don't think it explores the situation as fully or deeply as it might. But, like I said, still very much worth seeing. The black-and-white cinematography is excellent. Guinness of course is superb, especially as Barratt, and it's interesting that he's less convincing as the scoundrel; I think that says something about the man himself.

I'm curious now about the Daphne du Maurier novel on which it's based; according to some of the reviews at TCM, it's considerably more complex. 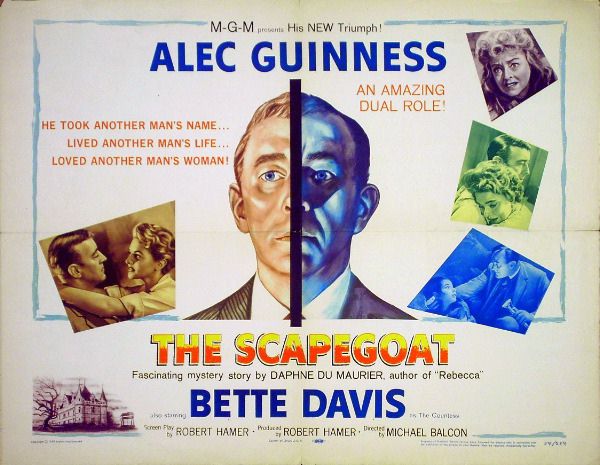 The billing given to Bette Davis in the poster is misleading. Her role is relatively small, though memorable: if you're a Downton Abbey watcher, imagine the dowager countess as genuinely corrupt and malicious.

The Man in the Gray Flannel Suit

When I saw that this one was two-and-a-half hours long I considered deleting it without watching it. I tend to be impatient with the sort of drama of the mundane that it promised to be, unless it's done with the greatest skill and preferably somehow bringing in themes that transcend the psychological or social. But I decided to try it anyway, and I'm glad I did.

I suppose most people around my age have heard of the novel on which this movie is based. I've never read it, but I have a vague idea that it exposed the frustrated conformity of the middle class or something. The protagonist does have to deal with the question of whether to tell his boss a possibly unwelcome truth or to flatter him--whether to be a yes-man or not--but that wasn't what made the movie interesting to me. More so is his basic situation: he's a World War II combat veteran facing the challenges of workaday domestic life, including a wife who thinks he's cowardly for not being more aggressive in pursuit of a better job and more money.

It's a little stiff, and not terribly subtle, and not without cliches, at least as viewed from the vantage point of 50 years of criticism of the middle class, but it's better than its limitations, I suppose because the major characters themselves are pretty convincing. How it compares to the novel in those and other respects I can't say.

One minor thing that intrigued me was that already in 1955 the absorption of children in television programs was seen as a problem.

Also, it's hard to imagine a 33-year-old today being as mature as the protagonist (but then Gregory Peck was 40 when the film was made). 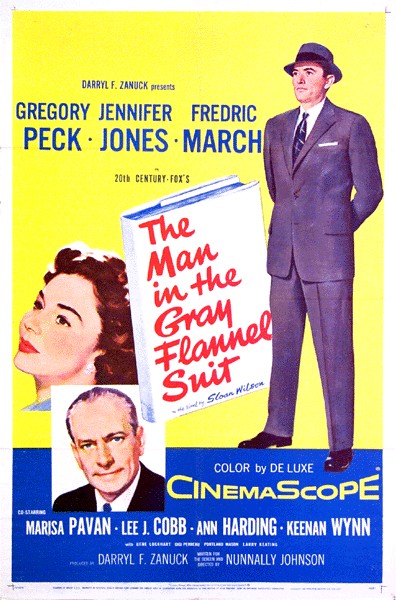 Good news: two police officers are caught having sex on duty and demoted or suspended.

Why is it good news? Because she's black and he's white, and it's not a racial story, it's a police discipline story.

It will take generations for Alabama's image to recover from the stain of slavery, segregation, and most of all the violent resistance to the civil rights movement. And certainly racism still exists. But I personally have attended two inter-racial weddings. Both couples are native Alabamians and still live here, and though they probably raise eyebrows sometimes, they do not, as far as I know, live in constant fear.