I know this is nothing by the standards of any part of the country north of Tennessee or so, but it's hard to communicate just how freakish it is here. Normally the most severe wintry weather we get is a few days here and there slightly below freezing. Once, ca. 1996, there was enough snow in Mobile to cover the ground and stick for most of a day,  and against the stern instructions of the authorities, I drove several of my children over to see it. Now and then we get a bit of sleet or freezing rain. But I've been living in this area for 23 years and haven't seen anything remotely like this.

This was the view out the front door this morning. That looks like snow, but it's actually mostly sleet. It fell along with a little rain, so it was a bit slushy, and then it all froze hard overnight. Footprints don't show on it. The stepping stones are clear because I swept the sleet off last night while it was still falling, before it had a chance to harden. I did the same on the steps, and my wife found a box of ice cream salt which worked wonderfully for keeping the steps clear. 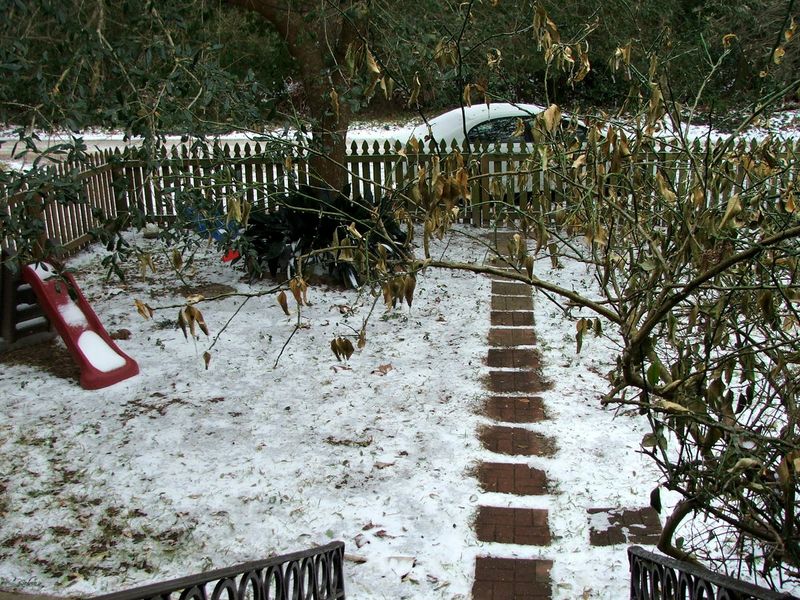 But the big news, and the sad news, in this picture is the dead leaves on that tree overhanging the front steps. That is our lemon tree. It should be green even in winter. The damage you see is from the similar cold snap of a couple of weeks ago, which involved no precipitation. We'll know in six weeks or so how bad the damage really is. But I think there are going to be no lemons this year. This is how it looked only six weeks or so ago. 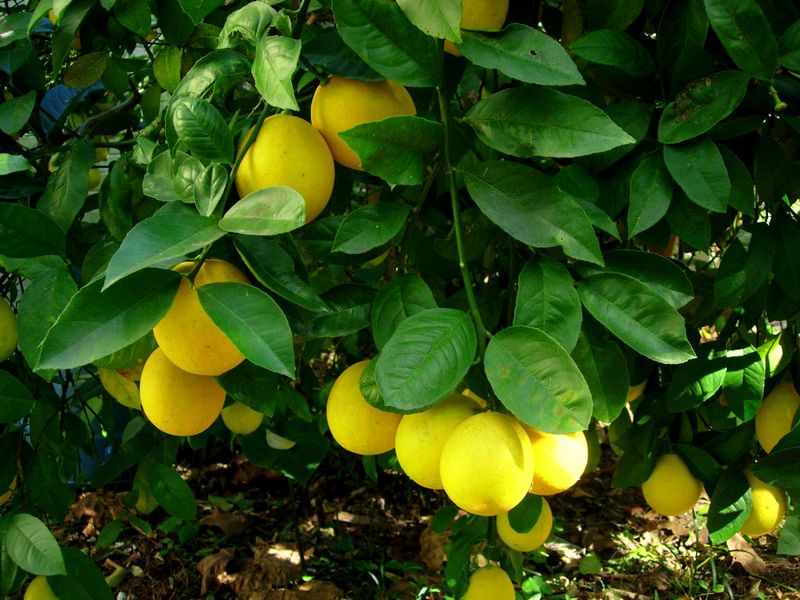 The beach is covered with ice, too. 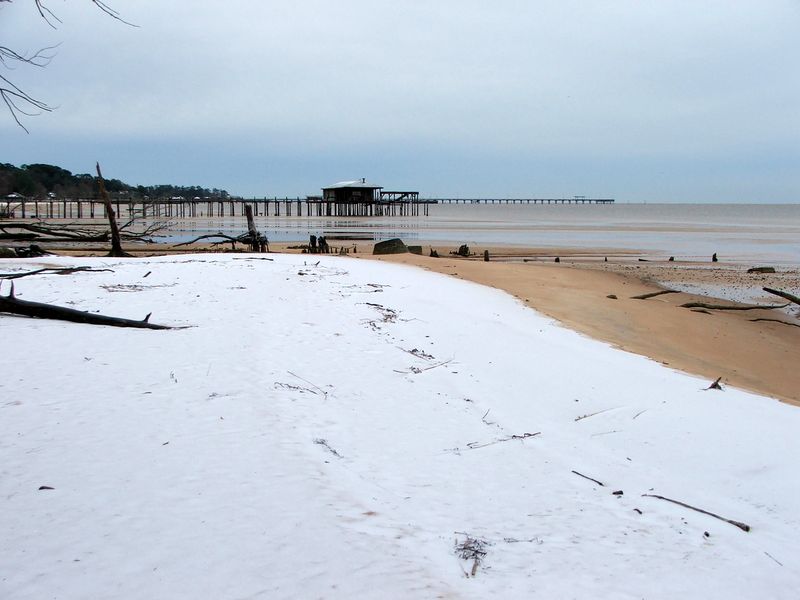 On a slight slope, I could take a couple of running steps and have a nice slide, which was not very smart for a guy with a bad back, but fun.

I looked for ice along the edges of the water, because I wanted very much to be able to say that Mobile Bay is beginning to freeze over. But apart from a bit of frozen foam there really wasn't any. There was, however, some fresh frozen mullet. 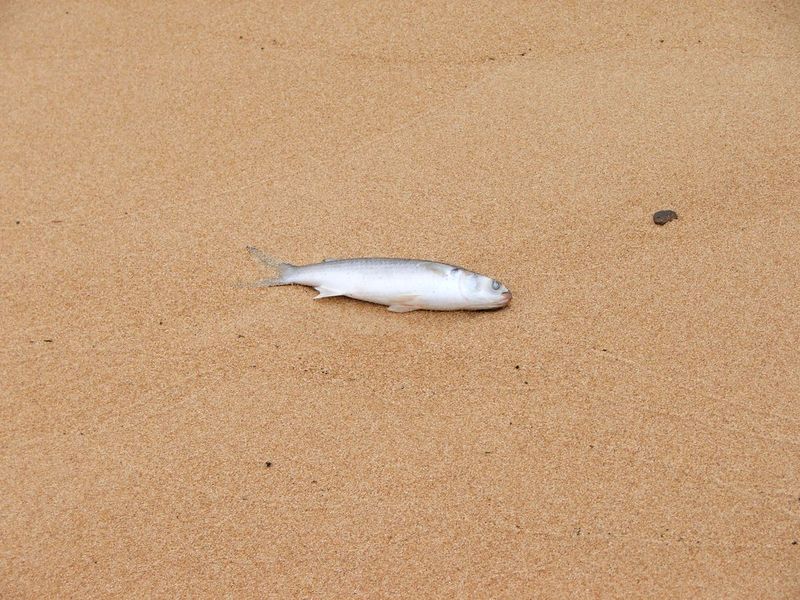 We watched the weather report on one of the local TV stations last night, which we rarely do, and it was very funny. Roving correspondents all over the area, trying to think of variations on "Look at the ice on that highway. Gosh, there's a lot of ice! Ice is slippery, don't drive on it. Look at all that ice!" And there was a funny scene of kids from quite young to college age "sledding" on plastic storage-bin lids and anything else they could find that was flat and big enough to sit on.

Oh, and my wife and I, like almost everyone else in the area, got an unexpected two days off work, which is why I have time to do this.

Awesome post! So glad you got the snow. But I'm very sad about your lemon tree. I hope it survives at least. Great pictures!

And did you eat the fish??

Hey, it actually looks like winter there! For what, a day or two?

My day out in the subzero cold was anti-climactic; I had been dreading it for days and it turned out to be sunny and still. As I remember from my Michigan childhood, there is not much difference between 10 degrees and minus 20, so long as the wind does not blow (the high was around zero yesterday, and started out at minus 15).

Good (that it was anti-climactic). It really is kind of amazing how much difference wind makes. The "wind chill factor" stuff is very real.

No, I didn't, Louise, but now that you mention it I'm surprised my dogs didn't go after it. I suppose the fact that it wasn't rotten made it relatively unappetizing. Or maybe they just didn't pick up the smell because it was frozen.

It's the people in Austin I'm really worried about.

Tried to get them to pull me on the ice by their leashes but it didn't work.

Oh no! I didn't even listen and now it's stuck in my head. In fact the other day I started mentally composing a variant that begins "Lemon tree not so pretty..."

Yesterday was pretty anti-climatic in Indiana too. They declared an emergency on Monday at noon and it was supposed to last until Tuesday night. But they lifted it Tuesday lunchtime instead. It was bitterly cold out, but much less bad driving that in the blizzards of Saturday afternoon, a few days earlier, when the unploughed roads really were treacherous.

Tried to get them to pull me on the ice by their leashes but it didn't work.

A lot of stuff around here is still closed. There was some melting today, but the temp never got more than slightly above freezing and now it's down again and everything has re-frozen. I think it's supposed to warm up enough for all the ice to melt tomorrow.

Louise, your Austin link was caught by the spam catcher for several hours before I noticed it.

Talking about how its even freezing in FLORIDA is something that has helped a lot of Hoosiers get through the past ten days!

Someone posted a pic on Facebook of a "Welcome to Florida--the Sunshine State" sign encased in ice.

The situation in Austin was clearly very dire, but more seriously, the Birmingham snowpocalypse does sound very worrying. I hope everyone got through it ok.