Some Interesting Words from Eve Tushnet

Well, of course, the Catholic neighborhood of the Internet is still ablaze with commentary about the synod, and I'm certainly not going to attempt any summary, especially as I've only read a little of it. But this from Eve Tushnet, which someone posted on Facebook, caught my eye. I don't necessarily agree with all of it, but it is interesting, because she's a gay Catholic who wants to follow the teachings of the Church, and yet without repudiating what she sees as an essential part of her nature.

I admit that I really don't see a good resolution for that problem. One thought the question provokes, though, is that her vision of some sort of place for "celibate partnership" (there's a link to further discussion of that idea in her piece) is something that I can see more easily workable for lesbians than for gay men. Despite the abundant evidence, most women don't really understand just how commanding and obsessive the male sex drive is. They may understand it as an observed datum, but since they don't experience it, they still tend to underestimate its power.

Eve Tushnet has a book out, by the way, which I'm sure would be interesting. 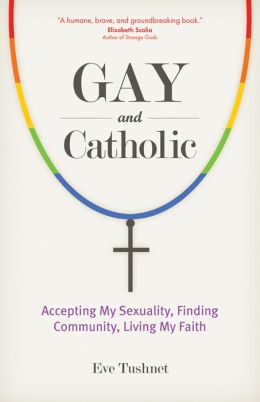 The thing which disturbs me most about the hospitality thing is simply that each Catholic and each married couple has their own gifts. It's wrong IMO to expect that all families will be happy when there are lots of visits from others. For some couples, this is simply too much stress. We have normally been very happy to welcome extra people into our home. We still are, although it's been a bit harder for us in the last few years.

But the one thing that should not happen is for people to start to expect from others that which they can easily and even happily do themselves. We're all different. This is turning personal preferences into moral absolutes and that's one thing I really can't stand!

The other thing I have to ask is why are all these people living alone? Don't they have families of origin? This is a serious question. Surely the biggest problem in our modern society is that people "have to" move away for jobs etc. It makes little sense (to me) to move away from one's own family and then expect another random family to take you in. This, of course, is mostly an economic problem.

I think that was the line that I had in mind when I used the word "supercilious".

Thank you--I'm glad the quality of our hospitality was good, because the quantity is sort of lacking.

It's also hard when one is still working full time and getting towards retirement age too. I remember my mother was 64 at retirement and she was *really* tired working all day. She has more energy now, 8 years later, because work isn't sucking all the life out of her.

Well, that's encouraging. Well, it is if I get to retire in eight years.

I'm hoping to find out before too long.

I keep telling myself that I have only worked full-time for 9 years, so I shouldn't be complaining, but I would sure love to be healthy enough to enjoy retirement when I finally get there,

I was unable to post a comment last night--appeared to be a TypePad problem. I was going to say, re retirement:

Funny exchange with my wife a day or two ago: I was talking about various people, some pretty closely related to me, who had retired somewhere around age 65 and died within a couple of years. Of course I was thinking that meant I should go ahead and retire. But she said "So you think if you retire you'll die?"

I think I would have thought just what she thought. I wonder if the people that happens to are the ones who don't have any interests outside work.

It's kind of horrible thought that one might not get to enjoy any retirement at all.

A couple of the people I'm thinking of were the ones who smoked heavily for 50 years. :-/ Another was a secretary.

I always think about the old lady, I think they called her Miss Trixie, who worked for the company where Ignatius worked for a while in A Confederacy of Dunces. She was falling apart mentally and physically but they kept insisting that working was good for her.

I guess I can never quit.
AMDG

"I think I would have thought just what she thought. I wonder if the people that happens to are the ones who don't have any interests outside work."

I think I agree.

But maybe the poor souls were just flogged almost to death in the workplace. :(

"I guess I can never quit."

Sounds too "Hotel California" to me. :/

It's Catch 22. If I don't retire soon, I won't be healthy enough to enjoy my retirement. If I retire now, I die. Maybe I will start refering to myself as an administrative assistant (a term I've resisted) instead of a secretary.

Actually, the second choice isn't all that bad.