Ronald Blythe, born in 1922, published his first book in 1960 and more than half a century on is still at it. His most recent release was a privately printed collection of poems, which came out late last year. In the interim he has written fiction, literary criticism, biography, and nature and travel books. And since the 90s he has written the column “Word From Wormingford” for the Church Times in England, and many of these essays have been combined and released in book form.

I first came across Blythe’s work in the late 90’s in the much-lamented Common Reader catalog. I didn’t actually read him, however, until about five or six years ago. Word From Wormingford (the book) had sat on my shelf for nearly ten years without my having looked at it, and when I finally did pick it up, I did so because I had been reading a lot of Wendell Berry at the time, and I had the notion that Blythe was a sort of English Berry. Although there are some similarities I was mostly wrong, although I would say that folks who like the one would probably like the other.

What you find in Blythe is a rare combination of literary erudition, keen observational skills regarding both men and nature, and a sort of peaceful piety that borders on the devotional. When one reads one of his pieces, he is as equally likely to come away with a recommendation for an unknown poet or novelist, as with a desire to learn more about some forgotten English saint or a wildflower that you recognize but never knew the name of. What is most appealing to me about his work is his obvious love for everything he writes about–literature, nature, the cycle of the Church Year, his particular place in rural England. His writing exudes charity, in the original and best meaning of that word. 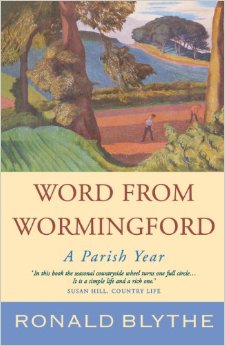 Three examples, chosen rather at random, from Word From Wormingford:

The old don’t like to be hurried away after the service. They want to huddle and chat and beam and ‘belong.’ My dreams take a sociological turn and I think, looking at the aged women, there go the last of the gleaners, and the last of those who rang for tea. ‘Eighty – why that’s nothing these days!’ But it is and they know it. They know it by their prayer… George Herbert was only thirty-nine when he found words to say, ‘The day is spent and hath his will on me:/ I and the sun have run our races.’

During a nighttime Lenten walk:

A Quaker friend apprenticed to horse farming in the thirties remembers his master getting up at two o’clock sharp every morning to reassure his beasts. A word here, a pat there. And I can recall the stockmen’s lanterns as they made their rounds. ‘Fareyouwell, then.’ Max the cat will accompany me on these strolls when he feels like it, now and then shinning up a tree to show off. On a light dark night I can just make out a Norman church whose windows, wrote Adrian Bell, ‘are no more than dream holes, the walls so thick that the light has the effect of being poured in through a funnel’. Well, that is how they liked it, our ancestors, a bright Saviour in a richly gloomy cave.

St. Matthew’s collect contains a favourite finger-wagging word–‘inordinate.’ It is getting at the apostle’s past as a taxman. Not for us covetous desires and inordinate love of riches. Nor for us inordinate affection, although quite how one is to keep this within bounds I have failed to understand. Some friends, the cat, some books, this landscape familiar to me since boyhood, are all in receipt of my inordinate affection and the cat would not be pleased with anything less. But if I am not covetous, it is because I have all I need. So no virtue in this. The epistle is far from equinoctial. No equality of light and night there. Light reigns. The autumn days are days to savour. There is a sweet rot in the air. Grey squirrels are allowed to do what we must not do, lay up treasure in the earth.

All of Blythe’s “Wormingford” writing has this quality. I’ve not read any of his fiction, but his literary criticism and biographical writing carries it as well. In a way, he’s like a meeker, milder C.S. Lewis – similar sensibilities, but more heartfelt, less strictly rational. He’s a very “peaceful” writer, and makes a wonderful companion at those times when you want to slow down and enjoy something for its own sake, even if you do learn much in the process.

For the “Wormingford” writing Word From Wormingford is the place to start. It has been followed up by many volumes, but it started off as a trilogy, the second and third books being Out of the Valley and Borderlands. As far as the literary writing goes, I’d recommend Characters and Their Landscapes (also known as From the Headlands) and Divine Landscapes. His most famous book is Akenfield, which is a fictionalized account of the life of an English village from 1880 to the mid 60s. It’s very good but a little different from his other works, as it is somewhat journalistic in style.

And if nothing else, it is nice to see the word equinoctial used in a sentence. Blythe does seem like a fine writer indeed.

I tried to find Blythe's fiction in a local library--either in Memphis or N. Mississippi--when you talked about him before, but there's nothing. I'll probably try interlibrary loan after I do all the reading I need to do for my posts, which is a LOT, because I think I would really like them.

I'm extremely busy today but chiming in just to say that Blythe is indeed great, and I'm envious of paragraphs like the ones Rob quotes. Janet, if you haven't read any of the Wormingford stuff, I think I can safely promise that you'll like it.

Do you have any of it?

It doesn't matter anyway because I'm up to my neck in Dean Koontz books, and it's the goal of my life to convince Rob that they are more than just potboilers. ;-)

Hi Maclin. OT - please put me down for April 12 for a contribution to 52 Authors. I don't yet know which one I will submit first.

"What you find in Blythe is a rare combination of literary erudition, keen observational skills regarding both men and nature, and a sort of peaceful piety that borders on the devotional."

I lived for a year in a little English village with a Norman church. Your descriptions of Blythe sound like a more literary version of the (CofE) parish newsletter there. Off to the library!

That's really what his Wormingford journal books are like. Well, for that matter, that's more or less what they are--a weekly column for the Church Times. He's got me thinking about reviving the Sunday Night Journal.

Here are a couple of interesting articles about Blythe, both from the Telegraph:

At the Yeoman's House.

Glad he got you thinking about bringing back your Sunday Night Journal pieces; I miss them.

I read another article on Blythe somewhere a while ago that said a recent biography of Patricia Highsmith (the Ripley novels) revealed that he had a close friendship with her. Surprised the heck out of me. His writing is so full of light, and hers so very dark, if not downright evil.

Thank you. If I were to start it up again, it would be more of a journal, and less a series of short essays.

I only vaguely recognized Highsmith's name, but having read the Wikipedia entry, yeah, I'm surprised, too.

I think that Blythe may actually have been "involved" with Highsmith, but if I remember correctly it was quite a while back. Not sure if they remained friends subsequently. I get the impression that RB was a bit of a bohemian when he was in his 20s and 30s.

By the way there are loads of inexpensive copies of both 'Word from Wormingford' and 'Akenfield' on bookfinder.com. Many of his other books as well.

It's not at all surprising that RB would have been a bit wild in his youth. And judging by those pics of Highsmith in her younger days on the Wikipedia page, I can easily see why he could have gotten "involved." But unless he had a pretty radical turnaround at some point, seems like that would have been a peculiar relationship. Well, sounds like any relationship with her would have been peculiar.

Many happy returns to Ronald Blythe, who celebrated his 97th birthday yesterday!

On a sad note Jeffrey Bilbro reports that Louisiana novelist Ernest Gaines has died. I've read only two of his books, A Lesson Before Dying and A Gathering of Old Men, but liked both very much, especially the latter.

I saw his death mentioned here and there yesterday and couldn't quite place him. Haven't read anything by him as far as I recall, but sounds worth pursuing.

Yes, happy birthday to Blythe, and though I bought it several years ago I still haven't read Akenfield....

I see Blythe wrote A View in Winter: Reflections on Old Age 40 years ago when he was 57. I wonder if he laughs now when he looks at that book.

I also see that our library system has Akenfield, so I have put it in hold.

I'm pretty sure that that book was based on conversations Blythe had had with the elderly, not with his own experience!

But then sixty was definitely considered old not so long ago.

True. That book was written in the 70's so at 57 one would have been at least approaching "old age." And if I remember correctly that book was prompted by his reflections on the aging and deaths of his friends the artist John Nash and his wife, who were considerably older than Blythe.

Victor Hugo said "Fifty is the youth of old age." Of course that was well before Blythe's time.

I just read some bits and pieces of The View in Winter at Google Books. Love this: "What does it feel like to be nearly a hundred years old?" the shepherd's widow was asked. She was stout and sane. "Well, you wake up in the morning, you say to yourself, 'What, still here!' and then you make the tea."