Climate Change Is A Factor in Everything Bad 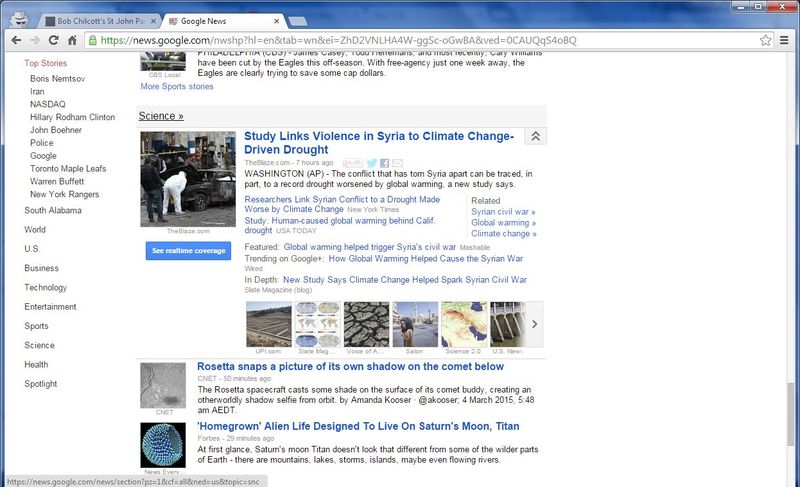 (Click on the image if you're having trouble reading the text.)

That the drought has been a factor in the war is easy to believe. That the drought was caused by climate change is almost surely a much shakier assertion. I remember a conversation with a climate change affirmer in which she said something similar. I said that the relationship was probably too complex to warrant such a broad conclusion. She said that a raindrop falling through warmer air would be more likely to evaporate before it reached the ground. That of course explains the belt of desert circling the globe at the equator. (Map courtesy of whymap.org. Ok, well, maybe not "courtesy of". "Swiped from.")

A pretty lengthy one, but yeah, just one.

That the drought was caused by climate change is almost surely a much shakier assertion.

Uh, yeah. Sounds to me like more hot air propaganda from the MSM.

How did they determine that "climate change" was responsible for the drought?* I suspect they took their computer models, changed the inputs to remove the global warming over the last 50 years or so, and then looked at the predicted changes in the distribution of rainfall--that is, what would have happened without global warming.

But of course this prediction comes from a model (or models) that almost always predict more global warming than observed, and completely failed to predict the current 16-18 year hiatus in warming. And yet somehow they're just perfect when it comes to modeling rainfall distribution (surely a significantly more difficult task than estimating average global temperature).

I'd bet the more you learn about the assumptions and methods involved in this counterfactual, the shakier it becomes. But it's OK to say anything if it's for a good cause.
---------------

Also, note the usual bait-and-switch conflation of "climate change" with man-made, catastrophic global warming, the theory they keep pushing on everyone. Even if the Syrian drought were caused by global warming, that doesn't imply the warming will cause catastrophe or is primarily--or even substantially--man-made.

Very few people argue there has been no increase in average global temperature over the last century or so. It has increased since the end of the Little Ice Age, around 1870. That's what happens when the earth comes out of a cold period.
---------------

* BTW, this sounds like a tautology. If there are now droughts where there previously weren't, then the climate has changed. So "the drought was caused by climate change" is actually saying "climate change was caused climate change." If they meant global warming caused the drought, they should have said so.

I wouldn't find it so annoying if it were only the MSM doing it. But this stuff originates with actual scientists who are, I feel pretty sure, venturing way into the speculative. It's possible that the original claims are much more modest--I didn't read any of the articles, I was just struck by the cluster of headlines echoing as fact what I suspect is at best informed speculation, and at worst just a wild guess. (I'll assume nobody is deliberately lying.)

"Even if the Syrian drought were caused by global warming, that doesn't imply the warming will cause catastrophe or is primarily--or even substantially--man-made."

The best discussion of this that I've seen was by Jim Manzi several years ago in National Review. His general point was that even if the warming is man-made, we have to think in terms of reasonable trade-offs and likely consequences, not hysteria and an ill-concealed desire to dismantle technological civilization, with global warming as one of many pretexts.

Good point about the tautology.

I have no doubt human activity affects climate. One of the things I've often wondered is if the human effect on climate might not actually cut both ways. I mean, some of the things we do have this effect, others another. Sometimes the effects might even cancel each other out.

I wouldn't find it so annoying if it were only the MSM doing it. But this stuff originates with actual scientists who are, I feel pretty sure, venturing way into the speculative.

Given what I've seen in the past, I'd put my money on the MSM being the main culprit--though possibly with a significant assist from climate "scientists" priming the pump with an academic paper that has a provocative-sounding title (and/or MSM-bait in the abstract or statements made by the authors).

Given assumptions A, B, C, D and E and inputs X, our models show that global warming could have induced a shift in rain distribution such that 23% of droughts that would have occurred in Turkey or Iran now happen in Syria.

Then then MSM took this highly-qualified, dubious information and converted it into the headline, Study Links Violence in Syria to Climate-Change Driven Drought.

IMHO, that's probably how it happened (I'd guess the Violence part is just people fighting over scarce water supplies).

I've always assumed that most reporting about scientific research has been grossly oversimplified. I have wondered in recent years if the researchers themselves might be a bigger part of the problem than I gave them credit for. I'm not thinking only of climate change, but of almost anything that might strike some sort of popular nerve. The temptation to get some attention and perhaps some career advancement must be pretty strong.

And although global warming is far from the only thing I've seen where I suspected this, the handling of global warming has served to increase my general level of skepticism, because it seems pretty clear that a lot of scientists are making public statements of a political nature that exceed what the research can justify.

I just ran across two articles by a physicist Bob Kurland on the climate change debate. The first, "Scientific Integrity: Lessons from Climategate." is about the controversy itself; the second, "Galileo Redux: Church Meddling in Science?" is about how the Church ought to talk about science.

I'll have to wait till later to read those, but: I really groaned when I read a few weeks ago that Francis was about to come out with a statement that would seem to lend the support of the Magisterium to the global warming cause. As if we hadn't learned the Galileo lesson. I hope it isn't as unqualified as the reports suggested.