I found this poor creature, apparently some terribly malformed waterfowl, perhaps an infant, washed up on the beach a few days ago. It couldn't have lived very long, having apparently no internal organs at all. And of course I  immediately thought: Climate change! 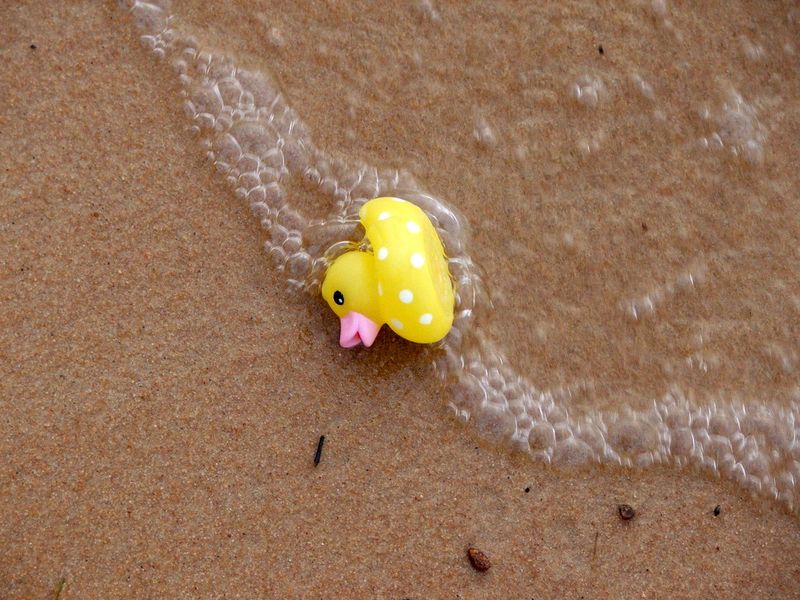 I'm not completely inventing this fear, either.

I've always described myself as agnostic on the question, but I lean more and more toward skepticism. I suspect this alarmism is going to be laughed at fifty or a hundred years from now. It's not that I don't believe that there has been a warming trend since 1880; if the people who study such things say that's what the measurements show, they're probably right, though I wonder if we really can attribute that much precision to measurements which purport to tell us temperature across the entire surface of the world. I'm willing to believe that human activity is at least partly responsible for it.

But we're talking about less than one Celsius degrees, less than one and a half Fahrenheit degrees. The attribution of all manner of calamities to that amount of change is simply implausible on its face, and the manifestly emotional-religious fervor of the climate change activists, as well as the fact that their proposed responses happen to match what they wanted to do anyway, suggests that skepticism is warranted. It's not a good sign that they now respond to doubters by branding them as Very Bad People, possibly cut from the same cloth as Holocaust deniers, which in turn puts one only a step away from being a Nazi.

I wonder, too, if anyone really believes we can fine-tune the global climate in the way that seems implied by the clamor for action. Suppose we took some drastic action, and it lowered the global temperature. What if we didn't get it exactly right, and the temperature dropped by .8C from its apparently optimal 1880 level? Wouldn't that be a crisis, too?

I always knew that X-Men were real!

Wow. I hadn't read that. I assume it's one of the things that turn up in the search I linked to?

"What if we didn't get it exactly right, and the temperature dropped by .8C from its apparently optimal 1880 level? Wouldn't that be a crisis, too?"

This is the set-up for the recent science fiction/action film 'Snowpiercer.' Scientists, in an attempt to curb global warming, fail in an attempt at climate manipulation and instead plunge the planet into a deep freeze. It's a very good movie, but unfortunately quite violent in spots.

I should be writing for Hollywood.

It is sort of an obvious question, but I've never seen it mentioned in discussions of cc. I guess the best reply would be that we would be doing very well to stop the warming, much less reverse it.

Scientists, in an attempt to curb global warming, fail in an attempt at climate manipulation and instead plunge the planet into a deep freeze.

That actually happened at my house this year.

It's making me think that I should increase my carbon footprint. I'm going to wear shoes with graphite heels.

WRT the mutants, yes, that was in the Google search. Here's proof that it's already happening.

"It is sort of an obvious question, but I've never seen it mentioned in discussions of cc."

So obvious that I had never thought of it. :P

Every time this page opens, I see that picture as a raw egg.

I've always described myself as agnostic on the question [of climate change], but I lean more and more toward skepticism.
...
I'm willing to believe that human activity is at least partly responsible for it.

Since CO2 is a greenhouse gas, human activity is almost certainly contributing some global warming, but I am far from convinced that it is a significant portion. To me, the fact that a large fraction of global warming (maybe 30% - 40%) occurred by 1930 is very compelling--well before the big dump of human-generated CO2 into the atmosphere. How could this happen if CO2 is the primary cause?

To my mind, the rational, scientific position on "climate change" is not that it's false (I don't believe that can be known for sure now). Rather, it's simply that the proponents have yet to prove their case. They haven't provided sufficient evidence that there will be dire consequences or that the global warming seen thus far is substantially man-made.

The burden of proof is on those making extraordinary claims. And IMHO, there's a double burden in this case since their proposed remedies will cost tons of money--or create economic disaster. It's not for me, or anyone else, to disprove their theory. They need to prove it. It annoys me that many people fail to grasp this basic idea and the climate alarmists often turn the tables and invert the burden of proof.

Here are three reasons why I believe they have failed to make their case:
1) The computer models are not reliable. They almost always predict more warming than observed, and almost none of the models predicted the current 16-18 year hiatus in warming. Also, this newfangled "methodology" of coding up computer models and then tweaking them until they match some data set needs to be examined very carefully by philosophers of science. This is not science as Newton and Einstein practiced it.

2) The behavior of major climate scientists has been biased, unscientific and malevolent. What is this nonsense of losing data, refusing to reveal data and methods (eg computer codes) and trying to silence dissenting opinions (all revealed in the Climategate scandals)? This is advocacy, not science. These people are not to be trusted until they've established their integrity by behaving in an open, honest and professional manner.

3) When pressed (eg by a skeptic "refuting" their theory by pointing to a cold summer), climate change advocates will insist that "weather is not climate" (though they are suspiciously mum when the weather seems to bolster their pet theory). What they mean is they are predicting long-term trends (eg that unfold over 50 - 100 years), not specific weather events. Fine. Then here's a simple philosophical/scientific question: if you have a model or theory about how something will behave over the next 50 years, how can you prove it's correct in less than 50 years? Don't you need to predict what will happen over the next 50 years and then verify your prediction is correct (sorry, matching outputs against past data doesn't count)? And even if you did this, who tests a model or a theory just once?

These are honest questions, not rhetoric. If anyone can answer these, I would be very interested to hear it. The upshot being that the "rush to alarmism" of the "climate change" crowd is ridiculous because they cannot know if their theory/models are correct for 50 years or more.* Also, it is quite suspicious that their proposed fixes involve policies that they already want--like more taxes, regulations, government power, international redistribution of wealth, money and power to the UN* and other international organizations, etc.

* The alarmist themselves predict that if we cut back to 1990 levels of CO2 emissions (which ain't gonna happen, not with China and India industrializing at breakneck speed), we might reduce global warming by some absurdly small amount (maybe 0.5 C?) over the next 100 years! From this they conclude that we must start NOW, but I draw the exact opposite conclusion: if even extreme measures will produce such paltry results, what difference does it make if we start 50 or 75 years from now--when we have more knowledge if drastic measures are even necessary?

In general, though I haven't given it as much thought as you, those are my reservations. Among other things, I'm suspicious of the scientific claims for reasons similar to those that make young-earth creationist claims suspect. Which is sort of funny. But when you clearly have a result to which you are very emotionally committed, it naturally calls for extra vigilance.

Have you read Jim Manzi on this? He makes many of the same points, especially the one about not wrecking the world economy on the basis of speculation.

Not too long ago I heard one of the activists, Bill McKibben I think, say that if such-and-such a measure was not passed, it would be "game over for the planet." Really? Game over? I can't help wondering if he really believes that. And same goes many times over for Al Gore and his private jet, mansions, etc.