My sisters and I grew up surrounded by excellent books, all chosen by our mother and almost all of them British classics. (I have often wondered where my mother, a Chinese immigrant to California, acquired her knowledge of English children's literature.) As children, we didn't know that they were classics. They furnished the imaginative landscape we took for granted among ourselves. At the same time, the Britishness of that landscape set us apart from both our French Canadian schoolmates and our American cousins.

Rosemary Sutcliff was one of the authors on our shelves. She wrote retellings of many legends—Greek, Celtic, and Arthurian—but her best-known works are The Eagle of the Ninth books, a sequence of historical fiction novels for children whose protagonists are descendants of the hero of the first book. It would be misleading to call them a series, as each of them is an independent story, unconnected to the others except by the genealogical tie. It's even slightly misleading to call them historical fiction for children, because her books stand on their merits as fiction, unqualified by age range or educational content. She prided herself on not writing down to children; as an adult, I have enjoyed reading her for myself at least as much as my kids have enjoyed my reading her aloud to them.

One reason for this is that Sutcliff successfully avoids the didactic tone that plagues a lot of historical fiction. Her goal is clearly to tell a great story in a particular historical context, not to inculcate historical knowledge of that context. She never creates an ignorant character just so his ignorance can be remedied for the reader's benefit. Not for her the traveler asking about local customs, or the child puzzled by adults' doings, unless the narrative demands one. Not for her the lecture in reply, but rather a natural conversation. (Reading Bonnie Dundee, in fact, I gleaned so little explanation from the text itself that I kept having to consult Wikipedia to keep track of the shifting religious and military/political enmities.)

For example, at the beginning of The Eagle of the Ninth, the protagonist arrives to take over command of a Roman garrison in Britain. Being new to command and new to the country, of course Marcus has questions for the outgoing commander, and the answers are as helpful to the reader as to him. However, his inexperience and foreigner status are not mere devices set up to make space for the answers; instead, they are among the driving forces of the whole story. The conversation itself is written entirely naturally, with both men taking part and wandering from one topic to another. Their shared assumptions are left unstated; the reader has to infer, for instance, that to these legionaries “home” always means “Rome.”

Another reason why adults can enjoy Sutcliff is the attention she gives to place and landscape. The details of weather, topography, and human construction are concretely and specifically described. They play a vital part in the story, influencing and reflecting both the action and the characters' states of mind. Here is Marcus's first view of his new post:

The British town was spread below the southern scarp of the Mount; a sprawling huddle of reed-thatched roofs, every colour from the gold of honey to the black of dried peat, according to the age of the thatch; with the squared, clean lines of the Roman forum and basilica looking oddly rootless in their midst; and the faint haze of wood-smoke lying over all.

The contrast between the irregular, vivid British houses and the precise, geometric Roman buildings will be echoed throughout the story in the encounters between Britons and Romans, and especially in the relationship between Marcus and his British slave. By the end of the story Marcus's feelings about the landscape have changed.

Standing there with the last cold spattering of the shower blowing in his face, he thought, 'I can go home,' and saw behind his eyes, the long road leading South, the Legion's road, white in the Etruscan sunlight; the farmsteads among their terraced olive-trees, and the wine-darkness of the Apennines beyond. He seemed to catch the resiny, aromatic smell of the pine forests dropping to the shore, and the warm mingling of thyme and rosemary and wild cyclamen that was the summer scent of his own hills. He could go back to all that now, to the hills and the people among whom he had been bred, and for whom he had been so bitterly home-sick, here in the North. But if he did, would there not be another hunger on him all his life? For other scents and sights and sounds; pale and changeful northern skies and the green plover calling?

That excerpt illustrates a recurring theme in Sutcliff's writing, the individual undergoing a change both personal and collective. Her characters are uprooted or cut off in one way or another and lose their identity: they are orphaned, they are captured as slaves and renamed, they are cast out from their tribe, they are invalided out of the Legions. Eventually they forge a new identity, but the pain of the loss remains with them. Sometimes the specific loss is forced upon them, and sometimes circumstances dictate that loss there must be, but the character decides which one: to make his home under the pale and changeful northern skies, Marcus must leave his hunger for the pines forests unsatisfied. Either way, the loss is irrevocable. As another character says, “There is no way back through the Waters of Lethe.” 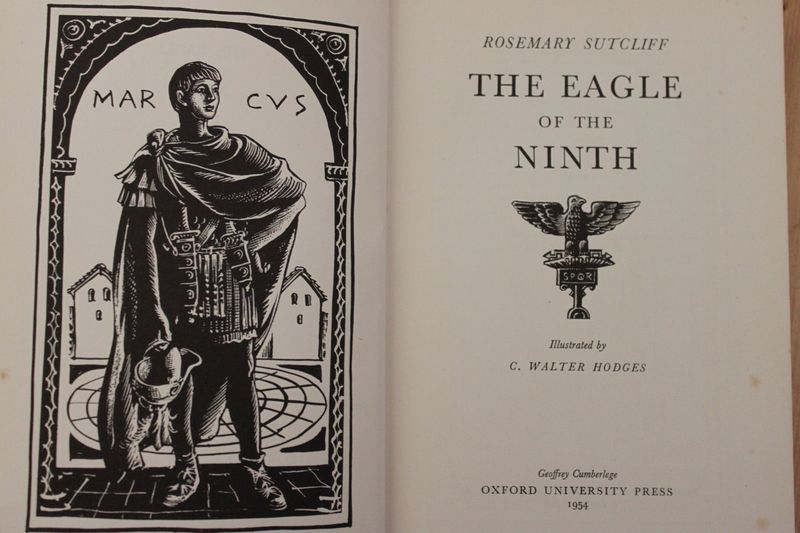 The changes in identity are mediated by the characters' allegiances to other individuals. Unavoidably, then, these shifts bring conflicting loyalties, in which the personal usually overcomes the tribal. In The Lantern-Bearers, Aquila's sister is carried off by one band of Saxon raiders and he is enslaved by another; years later, she helps him escape but will not go with him, because of her love for her Saxon husband and child. When Aquila offers his wife, a Welsh chieftain's daughter, the chance to return to her people, she too says, “I used to dream night after night of being free; free to go back to my people—my own people... But it is too late. I belong to you. […] I am betraying my own people—my own world—to stay with you.” However, through the personal attachment, there can come a later attachment to the tribe and a new collective identity. Thus a Roman centurion who deserted and married a local woman many years ago can now say, “I am of the Segoviae.”

The shifting identities in the Eagle sequence carry a startling revelation—startling, at least, to me—of how much British history there was before England ever existed. In the first book, the Romans are clearly outsiders, an occupying power opposed to the British (Celtic) tribes. In later books, their descendants have come to consider themselves British as well as Roman, indeed to consider British a species of Roman. In almost all the books, the Saxons are the invading barbarian enemy. For a long time, I hadn't clearly distinguished between British and Anglo-Saxon, so despite her non-didactic books, Sutcliff has been very educational for me.

Thanks for this, Anne-Marie. I am currently reading her Arthurian trilogy -- starting with The Sword and the Circle -- and I've been enjoying it tremendously. As you say, these stories may be intended for children, but there is nothing in them to dissuade an adult from enjoying them as well.

I've also read her version of the Beowulf story; I liked it, but not so much as the Arthurian tales. A few months ago I tried to order a nice set of the Eagle of the Ninth books that I found on discount, but I was later informed that they were sold out. It sounds like I should keep looking.

When I was looking for a book jacket to add to this post, I found several Eagle of the Ninth covers which said "Soon to be a major motion picture." I wonder if it just didn't get made, or was made but wasn't that major, or was made under a different name.

I remember seeing trailers for that moviea and I was looking forward to it. Thanks for your great piece Anne Marie

I haven't read her Beowulf. Can you compare it to Ian Serraillier's version?

There was a movie, called just "The Eagle," but I don't think it was very major. Apparently there was also a BBC-TV mini-series in 1977.

This must be it. Mixed reviews, but Roger Ebert gave it 3 out of 4 stars.

The film was rather poor, but had a couple of Hollywood stars in it. Does that count as "major"? There's a trailer here: https://www.youtube.com/watch?v=taRnzi9pKFM.

The BBC series was very good, or seemed so when I was a child. It had everybody on the primary-school playground playing at Romans and Britons.

Sutcliff's Beowulf is one of her weaker works.

There's an interview with her here that made an impression on me when it was first broadcast: http://www.bbc.co.uk/programmes/p009mj4y

I listened to that interview again just a couple of weeks ago, when looking for material for listening exercises, but now the link isn't working for me. This one does: http://www.podcastchart.com/podcasts/desert-island-discs-archive-1981-1985/episodes/dida-rosemary-sutcliff

This is really good, Anne-Marie. I makes me think I need to get my copies someplace that my grandkids can reach.

Anne-Marie, I can't compare Sutcliff's Beowulf to Serraillier's. I tried to get my hands on the latter a while ago, but I didn't succeed.

O man I need to raise my game

So do I, Grumpy. Next up: Louise on Belloc.

Wish I'd known about Rosemary Sutcliff's books when my daughter was growing up; she would have loved them. But it's not too late for my granddaughter, who just turned eight. Thanks for the fine introduction, Anne-Marie.

I thought I was next, for 10 April? I re-read the Wrinkle in Time yesterday. Am I the following week?

Well, actually I don't have anything on the schedule between April 5 and Sept.20, so I was a little surprised, not to mention relieved, when I got Louise's Belloc piece. I must have missed some signups. By all means, consider the following week yours if you want to.

OK, I will write my 'Wrinkle in Time' piece for Sunday 19 April

Wonderful. Thanks. I'll put it on the schedule, in case anyone else looks. I keep telling myself to go ahead and do the other two I've planned, at least, so I'll have something in case we end up with a week or two (I hope not many) with no one scheduled.

It will be at least well into May before I can get to Newman.

Thanks Anne-Marie. I must dig out these books (we have at least two) and read them myself!

I'm on the road to my first grandchild's baptism, and these comments are really making me look forward to reading to him.