I first came upon the name Madison Jones ten or so years ago while reading Flannery O’Connor’s letters. In a letter to “A” dated July 6, 1963 Miss O’Connor says that she was currently reading Jones’s new book, and goes on to say “It’s a shame about his books. They are excellent and fall like lead clear out of sight the minute they are published.” Trusting her judgment, I got a copy of his first novel, The Innocent, and jumped in. I’ve been a fan ever since.

Jones, born in Nashville in 1925, was almost an exact contemporary of O’Connor, the two of them born within days of each other. Jones attended Vanderbilt, where he studied under Donald Davidson, one of the Fugitive poets and “Twelve Southerners” of I’ll Take My Stand fame. He went on to get his Master’s at the University of Florida under Andrew Lytle, another one of the twelve. Jones had several short stories published in the 1950’s, but his first novel did not appear until 1957. He had in the meantime become a friend and correspondent of O’Connor. Jones went on to write eleven more novels over the next 50 years, his last one appearing in 2008. He also taught writing at Auburn from 1956 to 1987. He died in 2012.

Although he received several major writing awards Jones largely flew under the radar of the contemporary literature scene. One can probably mark this down to several things, including his conservative Southernness and the stark traditional morality apparent in his writing, neither of which tends to get you positive attention from the literary movers and shakers. Critical attention to him is therefore largely lacking, and only one book on him has appeared, a collection of essays by various hands published by the University of Southern Denmark (!). In any case, Jones does write excellent books as O’Connor said, and they are well worth reading.

Of the twelve novels that he published I’ve read nine. Often he reads like something of a cross between O’Connor and Mauriac – he’s got some of the “Southern gothic” imagination of the former combined with the psychological insight of the latter. But he’s more readable than Mauriac in my opinion, and his plots and characters aren’t as outré as O’Connor’s sometimes are. He wasn’t a Catholic, but a Calvinist, and although his work isn’t often explicitly religious, there is a deep sense of the understanding of original sin present in all his works. Many of the books follow a roughly similar plotline: a man makes a moral error, usually involving either a woman, money, or both, and we watch him unravel as he tries to justify and/or cover up his sin. His great theme seems to be, “What you sow you shall reap,” and where he is masterful is when he shows the interior effects of this on his characters.

A good example of this theme is his short novel An Exile (1967). A small town sheriff, bored in his marriage, has an affair with the much-younger daughter of a local moonshiner. In order to protect this secret he begins having to steer police attention away from her father, causing him to lie to his fellow officers and misuse his police power. Things rapidly go out of control, and his attempts to fix things just make it all worse. (This book was made into an okay but not great film with Gregory Peck and Tuesday Weld, I Walk The Line. The title song by Johnny Cash is much better known.)

Two of his better known novels actually veer away from these themes, however. Nashville 1864, which won the Shaara Award for Civil War fiction in 1998, concerns a young boy searching for his father in the aftermath of the Battle of Franklin, Tennessee. And A Cry of Absence, set in 1957, has as its protagonist a middle aged woman who comes to believe that her son may have committed a terrible crime. When it appeared in 1971 it was hailed as one of the great recent novels about racial issues. But the rest of the books that I’ve read tend to follow that rough “sowing and reaping” template. One might think that this would get monotonous or predictable from book to book, but Jones always manages to make things interesting, and his characters come across as real people, not just cutouts to fit the template.

Jones’s prose style is straightforward but well-crafted; his writing doesn’t draw attention to itself, but particularly good sentences or paragraphs nevertheless often jump out at the reader. In the main, however, the writing serves the story in an almost perfect balance.

For the newcomer to Jones I’d recommend The Innocent, A Buried Land, or A Cry of Absence. Or for a good shorter introduction you can go with An Exile, which runs to about 130 pages. The combination of great craftsmanship with a strong moral sense and profound character insight makes Madison Jones a unique and appealing figure in late 20th century fiction. 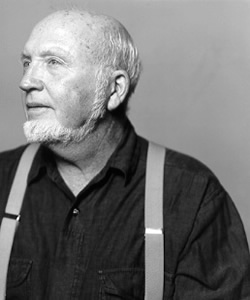 This means he was teaching at Auburn when my sister was there. Too bad she was in art and not writing.

Rob, I'm pretty sure that the authors that you have written about have been the most tempting to me. I'm glad that after next week I will be out of the author business and free to read what I choose.

Although I've really enjoyed the last couple of mine.

For the first time in my life I wonder if I should have gone to Auburn instead of Alabama.

I'm afraid staying in that orange and blue house might have damaged you in some way.

I only wondered, I didn't wish. If I wish, then you can worry.

Most of the authors in this series have been unfamiliar to me in the sense that I've never read them, but Madison Jones I had never even heard of. Thanks so much, Rob! I'll have to get busy on interlibrary loan. I'm not surprised that my county library has exactly zero books by him, but I am disappointed that my local Catholic University doesn't either.

You're welcome, Anne-Marie. I may not have stumbled across Jones myself had it not been for Flannery O'Connor's letters. I'm not surprised about your library either, even considering that his first four or five books were with major publishers. My county library only has three titles of his showing, with one of those listed as "missing."

Believe it or not, my local public library here in New Zealand actually has two of his books: The Adventures of Douglas Bragg: A Novel and The Innocent. And it's even put The Innocent in its classics section.

I'm pleased to see that my local small-town library has half a dozen or so. It may have something to do with the fact that he taught at Auburn for so long. And the little Catholic college where I sort-of-work has two.

The Innocent is excellent; haven't read Douglas Bragg yet. That was his last book.

Good essay on Jones by George Garrett, focusing specifically on his 2nd novel, 'Forest of the Night.' I didn't like this novel much when I read it, finding it too dark, but reading this piece makes me want to look at it again.

He's that kind of great but totally unknown writer you stumble upon maybe a half-a-dozen times in your lifetime, where you can't believe your good fortune in discovering...while wondering endlessly why he wasn't more famous.

Yep. Given the "Southern Gothic" connection and the quality of his work you'd think he'd be something of a shoo-in, critically speaking, at least in a minor way. I wonder if it has to do with the fact that ultimately his vision is a religious one, one that strongly reflects the idea of original sin. Even if he couches it in "non-religious" themes, that's something that's not particularly popular nowadays. He makes you look in the mirror, and modern folks don't really like that.