Although Mary Renault was not a trained historian, she is best known for her historical and mythic-historical novels set in ancient Greece. I won't say much about the mythic-historical novels, which read like historical novels but are distinguished by the presence of characters from Greek mythology. They feature clever inventions that satisfy both naturalistic storytelling and the myths that have come down to us. For instance, Minos is the title of the Cretan king and he wears a mask shaped like a bull's head; the labyrinth where Theseus kills him is the underground warren where captives are trained to dance with bulls. In these books, Renault indulges in some Christian prefiguring. There is much discussion of the need for the king to go willingly to be sacrificed for the sake of his people. There's a boy from "the back hills beyond Jericho," whose people are so simple that their god has no sons, and they think he is concerned only with them. Otherwise, these books are interesting for the same reasons as the straight historical novels.

Paul will wince at this: when my husband was a graduate student in philosophy, Renault's historical novels were recommended to him as a way to get a sense of the world in which the Greek philosophers lived. That is indeed the best aspect of Renault's work, to my mind. The historical accuracy is almost irrelevant, because what's really fascinating is the vividness with which she conveys certain aspects of ancient Greek life and the techniques she uses to accomplish that.

Her foundational virtue is that her characters clearly share our human nature, while having vastly different priorities and motivations from ours. Like us, they consider what their actions say about them; but instead of caring about whether they are being kind, for instance, they care whether they are acting nobly and in keeping with their station. Like us, they care about religion to varying degrees: some of them participate in rituals more for social than for devotional reasons and some of them pray fervently. But their prayers include blood sacrifices to gods whom they claim as their progenitors, and their petitions may be for dynastic vengeance.

Here's one of my favorite examples. In the contests for control of Alexander's empire after his death, Alexander's mother Olympias captures Alexander's cousin Eurydike and has her husband butchered before her eyes. Murder in the pursuit of ambition is recognizable to us, but we don't send messengers who say to our captive foes, "Eurydike, daughter of Amyntas. I act under command, do you therefore hold me guiltless before the gods.... Because you were born of royal blood, ... [Olympias, Queen of the Macedonians,] gives you leave to end your own life, and offers you a choice of means." Eurydike chooses hanging, but first makes the guard wait while she composes her husband's body. We recognize, as something we could share, Eurydike's loyalty to her husband and the familial loyalty that originally drove her to join the blood feud. But we would not seek to pursue such a feud as she does, stretching out her hands over the bloody earth and mangled corpse and crying out, "Witness, you gods below, that I received these gifts from Olympias. I call upon you, by the waters of Styx, and by the power of Hades, and by this blood, to give her in her turn such gifts as these."

In keeping with the genre, most of the historical novels have a first-person narrator who's a spectator to or a secondary actor in the historical events. The presumed audience are the narrator's contemporaries, which means that familiar events and customs are referred to without explanation. For the reader this device can lead to confusion at first (What's a hetaira?), but eventually it makes for a more immersive experience. The Last of the Wine opens with these words:

When I was a young boy, if I was sick or in trouble, or had been beaten at school, I used to remember that on the day I was born my father had wanted to kill me.

You will say that there is nothing out of the way in this.

It goes on to detail the circumstances of war and plague through which the narrator was given to a wet-nurse (instead of being exposed as his father had ordered) and that killed his mother, brother, and uncle. When the father returns from the war, he decides to bring the boy up after all.

He had been, I believe, fond of my mother; I daresay too he called to mind the uncertainty of life, and thought it less disgraceful to leave even me behind him, than to perish without offspring as if he had never been.

The Greek world is also conveyed through encounters with other cultures. This is, naturally, an important theme in the books about Alexander the Great, especially The Persian Boy. Bagoas, the boy of the title, is a slave in King Darius's household when the time comes to march against Alexander. "We started in a week. It was without precedent, for the Household to move so fast. The Palace was in an uproar...." Later, having been given as a present to Alexander, he sees the Greeks set off: "We moved camp soon after. The speed of it amazed me. When the trumpet sounded, everyone seemed to know his task without orders.... We were on the march, an hour before Darius would have been wakened."

If he's awed by Greek military efficiency, Bagoas is scandalized by the informality of Alexander's court. Alexander's companions address him by name and even contradict him. Sent to carry a message, Bagoas finds Alexander playing ball with his friends—and they're all naked! "It is something, I thought, when a king can put a courtesan to the blush." Alexander visits the sick tent, gets blood and pus on his clothes, picks up a stool with his own hand, and lets a man undergoing surgery clutch at him for support--"the sacred person of a king!"

Renault loves heroes, and her Alexander is a hero through and through. From his boyhood, he is marked out by his radiant good looks, his athleticism, his delicacy of feeling, and his intelligence. He epitomizes Greek excellence, in contrast both to the effete Persians and to his coarse Macedonian forbears. In Fire from Heaven, Philip of Macedon receives a deputation from Athens that includes the great orator Demosthenes. Early in the morning, Demosthenes unwittingly meets the boy Alexander and insults him. When Philip later learns of this, he asks, "Why didn't you tell me?" But Alexander has meanwhile devised a humiliation, a much neater revenge than anything Philip could exact on a diplomat: he revealed his identity just as Demosthenes began his oration, thereby frightening him so much that he became completely unable to speak.

Enthusiastic as I am about Renault, there is one area about which I am somewhat suspicious. Probably not coincidentally, it's the area about which she has been accused of writing with an agenda. Renault lived most of her adult life in South Africa, where her long-term relationship wth another woman was more tolerated than in her native UK, and almost all her books feature a homosexual relationship that is everything relationships are supposed to be: close, affectionate, long-lasting, faithful, mutually respectful, etc., etc. Family life, on the other hand, gets short shrift. I think The Last of the Wine is the only book that includes any normal domestic scenes of a husband, wife, and child. Well-developed female characters are rare; those that exist are mostly unpleasant and their actions are almost all driven by political ambition.

My personal favorite of her books is The Mask of Apollo. The narrator being an actor, we get lots of backstage views of Greek theater. He's a sympathetic character and truly pious in his devotion to Apollo. Perhaps I also like it because I'm completely ignorant of the political background (the attempts to rule Syracuse under Plato's influence) and don't feel the need to worry about whether it's accurate. 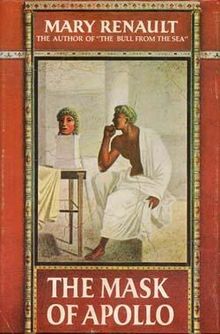 --Anne-Marie is a math tutor and homeschooling mother who lives just outside Washington, DC.

Thank youcso much for this. I lovedvthese books in my late teens

I can't believe there are books like this that I never knew about.

I did Greek in my last four years at school. Then in the two years after school and before University I read so many of Mary Renault's books. I liked the Mask of Apollo best also

When I was a kid I think both Mary Renault and Mary Stewart were writing books that I browsed through on visits to the bookstore, so I had the two of them confused. Never really knew about Renault and what she wrote until this post. Interesting and fun, and quite a niche writer for sure. In my limited knowledge of who might have written historical novels that took place in Greece I can only come up with a few by Gore Vidal.

I can't believe there are books like this that I never knew about.

That's been my response to a few of the contributions in this series. (Not this one: my dad was a fan of Mary Renault. I tried to read one when I was about 13 and couldn't make head or tail of it and haven't tried since.)

That has been the really good thing about this series. It's supplied me with enough reading for the next 5 years.

Same here. I know I'll never get to it all, if only because I won't remember. :-/

Mary Renault's work in general doesn't sound like my cup of tea altogether, but I think I'd like to read The Mask of Apollo, on the assumption that its portrait of the Greek theater is reasonably well-founded on fact. I haven't read the Greek dramatists since college. I need to revisit them (and visit the works I haven't previously).

Well you have it here in black and white--or black and ... What is this color? Taupe?

I don't actually know what color taupe is, but I see this as a pale greenish-brownish-grayish. One of those shouldn't have "ish" but I don't know which one.

Yes, the information will be here, and it has the 52 Authors tag, so it's a lot more retrievable than, for instance, a movie recommendation attached to a post about some other movie or book or completely unrelated thing. But that doesn't mean that I'll come back to it unless specifically prompted somehow. And some of the info is in comments.

My book club has added authors to its list on the basis of this series.

Maclin, Renault discusses her choices of theatrical details in an afterword.

I remember the gay stuff. For some reason it didnt seem like propaganda at that time, because it seems historically true to life

At the time, reading it, it seemed that Bagoas and so on simply came naturally out of the story and the Greek cultural context.

The fact that homosexual relationships were an accepted part of life in ancient Greece (and were accepted to have been so by classically educated people in the 19th and 20th centuries) probably partly explains Renault's feeling of affinity for the period. It needn't be propagandistic, just a natural outgrowth of her own experiences and interests. But not having read more than a few pages of her, I proffer the suggestion for what it is worth.

Ann Marie thank you so much for this piece. In a year of memories brought back by living in NYC your article added one more piece - reading Mary Renault when I was 19. So many joys in life deserved to be remembered often.

You are so welcome, Grumpy!