Mija lives in a modest apartment in South Korea. She supports herself and her sullen, uncooperative grandson, Jongwook, by caring for an old, physically incapacitated man. She is the sort of person who slips unobtrusively in and out of the lives of others without making much of an impression—except for one thing. She is always dressed very nicely, and it is this that others notice about her.

She has not been feeling well lately. She's worried about her heart. However, when she goes to see the doctor, he is less concerned with her physical condition than he is with the fact that she is losing words—not forgetting them, but momentarily unable to recall the names of common things. So, he arranges for further tests.

Leaving the hospital, Mija finds herself in the middle of a tragedy. The body of a teenage suicide, Heejin, is being taken out of an ambulance. Her mother, grief-stricken and hysterical, is staggering through the parking lot.

Soon Mija's own life is shaken by two devastating revelations. First, she finds that she is in the beginning stages of Alzheimer's. Second, she finds that Heejin killed herself because she had been repeatedly raped by six boys at her school, and Jongwook is one of the boys. Worse, the fathers of the other five boys have consulted an attorney about how they can save the reputations of their sons. The attorney believes that the poor farming family can be bought off for 30,000 Won, and they want her to pay a sixth, 5,000 Won. This far exceeds her ability to pay, and also, she is increasingly haunted by the death of this young girl, the devastation of her family, and the guilt of her grandson. However, it is hard for Mija to even consider going against the decisions of these men, and it doesn't occur to them that she would.

Mija is a woman without a voice. I don't think that I would have understood the full import of this had I not worked with Korean students and ministers at the seminary where I worked for eight years. Many older Korean men just do not seem to think that women are capable outside the home. (The younger students did not seem to be like this at all.) One older Korean student really did not want to work with me. He wanted to deal exclusively with my boss, but my boss kept sending him back to me, which was not entirely comfortable. And then, there was a woman who was about 40, and you could tell by the way that she dealt with people that she had come from a culture where women were very apologetic and meek in their relations with people in authority. And so I wonder how this plays out in South Korea itself. Mija says to someone on the phone that she has to put up with Jongwook's behavior because he is the head of the house—a boy of about 16 or 17.

Until now she has really only expressed herself in her clothing, but knowing that before very long she will not be able to be heard at all, Mija looks for a way to say what she has to say, and she finds it in a poetry class. She takes the class very seriously and works hard to find poetic inspiration, but it seems to elude her. Slowly, though, through Heejin's funeral (Catholic), her meeting with Heejin's mother, her attendance at a local poetry group, and the beauty of nature, she finds her voice and writes her poem, both on paper, and in her own life. 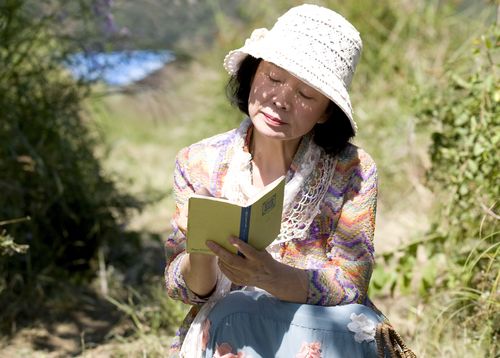 When I sent Maclin the post for Two Lives, he said that it sounded like a “good but painful-to-watch movie.” I'd say that that is a pretty good description of Poetry also. Jeong-hie Yun is excellent and we are always aware of the conflict and the desire that fill Mija. Some of the choices that she makes disturb us, but this isn't our story, it's Mija's, and by her lights, they are the right ones.

Among other awards, Poetry the award for Best Screenplay at the 2010 Cannes Film Festival.

—Janet Cupo has been commenting on this blog for about as long as it's existed, and has her own excellent blog at The Three Prayers.

We were talking about Michael Shannon on Rob G's movie thread and that has disappeared from view. I watched the first episode of Season 1, Boardwalk Empire. There's a lot of graphic violence, and I didn't think there was any payback for looking at that. I don't mind a move or TV show being interspersed with graphic violence if the movie as a whole makes it 'worth it' - as with The Wire or Breaking Bad. But in this one, at least from the first episode, I didn't feel drawn in enough to tolerate watching people's heads get blown off.

I've put Poetry into my amazon cart but the truth is it is not worth buying it until I get home. I watched The Diary of a Country Priest a couple of days ago, because I had to since I'm conducting a seminar on it shortly. It was very hard work with my laptop wheezing its way through. Its gotten worse since I made it do Shotgun Stories! I need to get home to my DVD player before I can watch Poetry

I have given up on the DVD player on my laptop. It was never good and now it's just an exercise in frustration.

It won't be long now, though, will it?

It might be possible to improve the laptop dvd situation. I did on mine. My cd player broke and so I started using my laptop as my cd player, and had a similar problem. I was able to minimize it by tweaking settings in the dvd/cd software. Not something I could walk/talk you through but the basic idea is that you want it *not* to run at its maximum speed, which is what it probably does by default, and which is usually noisy. A much slower speed is more than adequate for cd/dvd playback.

"I watched the first episode of Season 1, Boardwalk Empire. There's a lot of graphic violence, and I didn't think there was any payback for looking at that."

A friend of mine who watched the first season or two recently told me the same thing. The characters are all mostly "bad guys," more or less, even the cops, and he felt that there didn't seem to be much of a moral center to the show. (That's the same problem I had with 'Peaky Blinders,' by the way, and 'Ray Donovan' as well.)

I agree about Peaky Blinders. I was drawn in to the story enough to keep watching, but there was something fairly nasty about it. I wouldn't recommend it, although as is so often the case these days it's very well done.

Yes. The other one you sent is even bigger. I can make it smaller. I only shrank it enough to make it fit the column. Actually the other one might take up less space in the post after being shrunk to fit the column size. Also either one could be shrunk further.

I leave these decisions to you.

Mac, thank you I will tell the guy who helps me with these things what you said

Janet, I'm moving back on the 15th of August

Rob G., yes, I felt there was no one in the show I could identify with, and no moral anchor

You're welcome. It may not be fixable that way but it's worth a try.

I swapped out the pic for the other one, Janet. I like it a little better anyway, I guess because it shows her writing, and although I have it at the same width it's not as tall, so it looks a little more proportionate, I think.

I think that looks a lot better. Thanks.