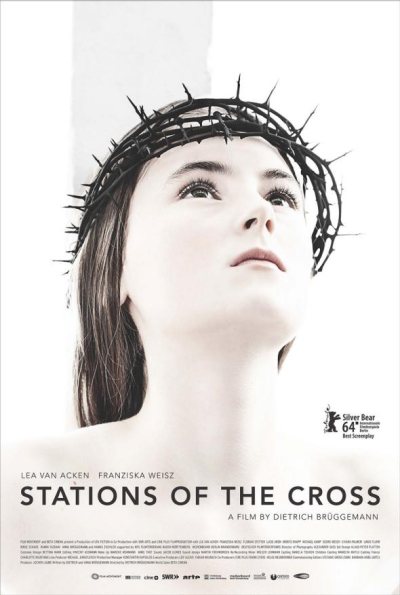 The opening scene of Kreuzweg (Stations of the Cross) sets the stage: a group of teenagers sit around a long table, books open before them, and a young priest speaks to them about their upcoming reception of the sacrament of Confirmation. He is articulate and winsome as he encourages them to stand firm in their faith, to embrace their identities as "soldiers of brotherly love" and ambassadors for Christ in the world. He proposes that during this final week before Confirmation they each should choose something to sacrifice to the Lord, offering it willingly and with stout hearts for the good of others.

Well and good, you might say, but his exhortation strikes several ominous notes as well. It becomes evident that he, and these young people, belong to a schismatic Catholic group -- called the Society of St Paul in the film, but clearly based on the Society of St Pius X inasmuch as it rejects Vatican II and the authority of the reigning pontiff. It is also clear that the priest strongly disapproves of contemporary popular culture, especially the "satanic rhythms" of popular music, which he believes will corrupt the souls of his students. In other words, this is a group of Catholics that sees itself as the last faithful remnant, surrounded by perils on every side.

The film unfolds over the course of the week preceding Confirmation, and as it progresses we follow one of the young students in particular: Maria (played wonderfully by Lea van Acken). She is devout, taking her priest's instruction very much to heart. But she is troubled as well, shy and lonely, and her family situation is difficult: she has an angry and dominating mother, a sullen and mute father (whom one infers has been slowly beaten into submission by his wife), and an ill younger brother. The sole light in her life is her family's au pair, Bernadette, a young woman a few years older than Maria who lives with them and helps with the younger children. 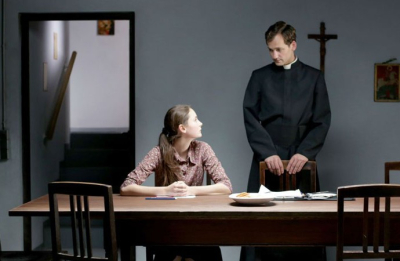 Over the course of the week, for a variety of reasons, tensions within the family escalate, and, at the same time, Maria begins to decline. We see her, step by step, in a series of carefully conceived scenes, falling prey to self-doubt, loneliness, sin, and sickness, and the film, step by step, turns from a sensitive character study into a tragedy.

But we knew that it would. The film's title announces its structure: it is divided into fourteen sections, each preceded by a title-card naming one of the Stations of the Cross: "Jesus Carries His Cross", "Jesus Meets His Mother", and so on. In each "station" the connection between what happens to Maria and what happened to Christ is sometimes clear and sometimes less so, but the overall arc is clear enough. We know how this story goes.

Structuring the action of the film in parallel to Christ's Passion is a compelling enough formal idea, but the director, Dietrich Brüggemann, has greatly enhanced his film by investing the individual "stations" with a strong formal element as well. To wit: each of the fourteen parts of the film is filmed in a single, unbroken shot, and all but a few of these shots are static. The camera does not move, pan, or zoom. One might think this would be dull, but in fact the effect is electric: every detail on screen, every entrance and departure, becomes something to notice. The filmmaking is stripped down to its most basic elements, and we become more, not less, aware of the filmmaker's craft. I cannot emphasize too strongly how effective I found this technique. This was especially so on those few occasions on which the camera did move. There are three. I'll not reveal the details, but only say that simply by breaking the film's established rules they become moments of high drama. 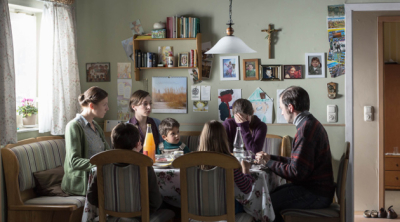 How to interpret the film? Is it a critique of religion? Of Catholicism in particular? A portrait of a saint? Or is it exploring a more general set of problems to which the religious setting is merely incidental? I'd answer a tentative 'yes' to each, with the caveat that whatever interpretation I try seems to be complicated by some detail or other.

I can imagine, for instance, a Catholic watching the film and concluding that it's anti-religious in general, or at least anti-Catholic in particular. After all, Maria's unwavering faith is a necessary part of her decline and crisis, entering both as motive and means. But there are other factors at work too, such as her volatile relationship with her mother, and the family's self-isolation from the surrounding society. And the plausibility of an anti-Catholic reading is strongly undermined by the filmmaker's apparent affirmation, at the film's climax, that their beliefs are in fact true.

But neither do I think that the opposite interpretation -- that the religious setting is incidental -- is plausible. It's simply too deeply woven into every detail for that to work.

Instead, I think that, despite its formal elegance, the film occupies a messy middle-ground in which a combination of personal, social, psychological, and spiritual elements combine to turn religion toxic. Exactly what those elements are, and in what proportion they matter to the outcome, is unclear. There is much to ponder.

The neat complexity of the film is summed up in the last of the fourteen stations, a wordless scene in which Maria's life seems to be regarded with a mixture of both affirmation and interrogation. It could hardly end any other way.

For what it is worth, the film played at the Berlin Film Festival in 2014, where it won the award for best screenplay. The film is in German, with some admixture of French.

This trailer for the film contains more cuts than the the film itself:

—Craig Burrell blogs now and then at All Manner of Thing and is curator of The Hebdomadal Chesterton. He lives near Toronto.

This certainly seems intriguing. It's on Netflix, both stream and dvd.

Thanks, Craig. I will check that out.

This sounds so interesting I will definitely watch it.