Light On Dark Water
Home Archives
Understated But Hilarious
When I am emperor... 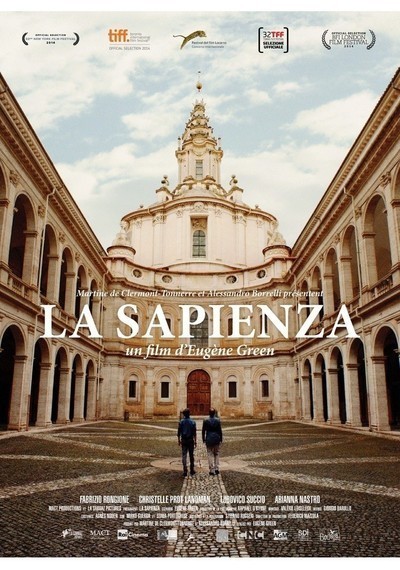 I believe that La Sapienza, a 2014 film written and directed by Eugène Green, has not been widely seen. I forget how it came about that I heard of it; probably there was some approving notice in the local press when it played at the Toronto International Film Festival in 2015. In any case, and box office returns notwithstanding, it is a film very much worth seeing.

We are introduced to a middle-aged couple, Alexandre and Aliénor, he an architect and she a psychoanalyst. They are both professionally successful, but beset by problems: their marriage has grown cold and dry, and he, in particular, has come to regret the path his professional life has followed, for though he has won many accolades he has neglected the guiding ideals that had inspired him to become an architect in the first place. He decides to travel to Italy to rekindle that early love of his subject, and she goes along.

It soon transpires that they cross paths with a young brother and sister, Goffredo and Lavinia. She is ill with a strange malady, and he, it so happens, is about to begin his university studies in architecture. Thus we get a natural shuffling: Aliénor elects to remain with Lavinia as she recovers in order that Goffredo can accompany Alexandre on his architectural tour. From this point, the film jumps back and forth between the two women and the two men, following their developing friendships, and, subterraneously, re-aligning and healing the original relationships.

The architectural tour, devoted especially to the works of Borromini, takes the two men to Turin and then, for the bulk of the film, to Rome. My friends, I know of no film more apt to delight the heart of a lover of the Eternal City! The camera lingers lovingly over details as it gently slides across a facade, or is content to gaze raptly at the intricate symmetries of a church ceiling. Rome, and its many beauties, is no mere setting, but becomes itself a subject of the film. It is truly glorious. Even were there nothing else going on in the film, the devoted attention it lavishes on these architectural gems would be enough to recommend it. 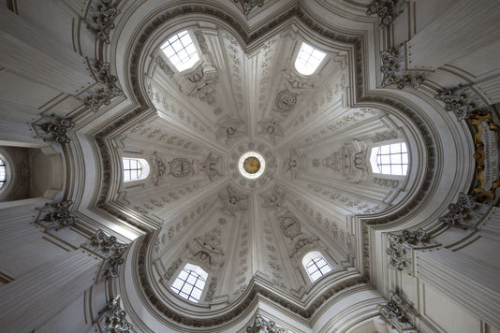 But there is more going on. As the two women get to know one another, Aliénor explores with Lavinia her hopes for the future and the nature of her illness. Meanwhile the two men, ostensibly the master and the student, through a series of encounters and conversations find their roles gradually reversed, the older learning from the younger how to recover his lost passion for his art. Those, at least, are two of the main arcs of the story, but to leave it there would be to oversimplify.

On the surface La Sapienza is about how the friendships and experiences of the characters change them for the better, for the film believes strongly in truth and beauty as spiritual curatives. But having pondered it at some length (and watched it twice), I believe that one of its leading convictions, sunk into numerous aspects of both story and presentation, is that spiritual realities manifest themselves in physical things, or, put the other way, that tangible things possess an inner reality. This is true of buildings as of bodies. It's a rather Catholic idea, consonant with a sacramental imagination, but the film itself does not stress any particular religious connection. (Indeed, all we know of the religious convictions of the lead characters is that one is a syncretist and another an atheist.) It is nonetheless an amazingly rich theme to explore, and one rarely encountered at the cinema.

At this point I should note the most obvious thing that will strike the average viewer of La Sapienza: it is weird. I choose the word advisedly, intending to catch the resonance with the old sense of 'uncanny', as well as the modern sense of 'unusual'. Green has adopted a daring formal technique: almost always the actors speak directly into the camera, as if addressing the viewer, even when actually addressing one another. The conversations have a studied quality, each line having a little more silence around it than we’re accustomed to. Furthermore the actors often adopt a highly artificial acting style, with stiff movements, vacant facial expressions, flat tone. Even the blocking is deliberate: characters who are unfriendly to one another, for instance, stand angled away from one another, while characters who love one another stand face to face. So strange is the cumulative effect of these unconventional rules that I confess I found the experience of watching it curiously unnerving.

Here is a short excerpt of a conversation between Alexandre and Goffredo, illustrating, in part, what I mean:

At first I was puzzled by the purpose of these odd formal strategies, but upon reflection I believe they are related to the idea I discussed above: that inner realities are conveyed by means of external signs. In this film what we see on the characters' faces, and in their postures, and what we hear in their voices, are their souls, without disguise or polite veil. The face looks hard because the heart is hard. The eyes are bright and open because the soul is alive and beautiful. They smile because they feel genuinely happy. They walk stiffly, or easily, because their souls are bound, or free. The drama we see is the interior drama. And this revelation of the inner world by the outer is transposed in the film also to the architectural masterpieces, palaces of space and light, in which we see only the surface but are drawn to the spirit.

I hope, but doubt, that these notes adequately convey what I found so alluring about the film. If I have made it sound dull or didactic, this is just because while writing I've been trying to work out in my own mind what I think it is doing.

All told, I found it to be a fascinating and surprisingly touching film. It is rare to find a movie that has such great confidence in beauty and goodness, and one that is so wholly oriented toward light. It may seem perversely odd at first, on account of its unfamiliar and apparently bizarre conventions, but as it proceeds it slowly excavates an interior space until the viewer, without quite knowing how, finds himself in a realm of mystery.

—Craig Burrell blogs now and then at All Manner of Thing and is curator of The Hebdomadal Chesterton. He lives near Toronto.

rented it from amazon

I'm not sure what options people have to view this movie. In Canada we don't have the streaming services that are available in the US. I borrowed the DVD from our public library.

It can be streamed on Netflix.

Our county library system has several copies of this, so I will probably get to it before too long. Thanks for the tip, Craig. This is another of those films I would have missed entirely if not for this series.

I'm in the middle of it and will finish today. You're right, Craig, very symmetrical.

That was very good. It takes a while to accept the weirdness. ;-) In a way it reminded me of characters in a Greek play. I think you would have to watch it several times to see everything that is there.

O Wisdom, O holy Word of God, you govern all creation with your strong yet tender care. Come and show your people the way to salvation.

I was expecting to find that the name of the church was something like Holy Wisdom. But it's Sant'Ivo alla Sapienza, which puzzled me at first. Saint Ivo [what?--of? with?] Wisdom? It's *at* The Wisdom, otherwise known as the University of Rome.

In the movie, they don't talk about wisdom, they talk about sapience.

Yes, if I remember the movie sticks to "sapience", described as "beyond love and knowledge", or something like that. I'm a bit sleepy. What day is it?

Do you think I am in the right ballpark in getting at why the film uses all those strange conventions?

Yes. Do you think we could think of their bodies as architecture. I hadn't thought of that before.

One reason why I think I might watch it again is that I want to watch the movement in the film. I realized at one point that the two men seem to be always walking down steps-frequently bracketed by walls. And then at the end I noticed the women walking upward in the park. I just want to get an overall idea of how he uses that movement.

This really sounds interesting. I'm not likely to have a chance to watch it very soon though.

Maybe so, Janet. If architecture exists to create a space that can be filled with light, I suppose that could apply metaphorically to bodies. But I see the analogy running more strongly in the other direction: that just as bodies are spiritual realities, so too are buildings.

I hadn't noticed the up/down element at all. Now I'm thinking I should watch it again too.

What I meant about the bodies being architecture is that it seems to me that the director is using the actors' bodies in the way that architects use building materials. He uses their position and movement to tell us something.

Oh yes, I see what you mean. I think that's right.

I notice that the director has a new film, Le fils de Joseph. I'm rather curious about it, if only to see which of the odd conventions found in La Sapienza are used again.

I'm pretty sure we talked about this film months ago on here somewhere but I couldn't remember when or in what context.

In any event, I highly recommend the 2014 German film Phoenix, about an Auschwitz survivor who comes to believe that her husband may have betrayed her to the Nazis, so she tries to find him in post-war Berlin to get the answer. It's a drama, not a suspense film, thus it's fairly subdued, but the acting is very good,the story quietly gripping, and the ending pitch-perfect.

I remembered talking about that film and seeing it on Netflix. I wanted to watch it, but I haven't been able to remember the name, so thank you.

You're welcome. I watched it last night, finally getting it from the library after being on the waiting list for months. They originally had only one copy and there were 30-some people waiting for it, but it appears that they acquired a few more copies recently.

I've seen Phoenix too, Rob, and I thought it was quite good. Subdued, as you say. I confess I was a little disappointed with the ending, I think because I'd heard it praised too extravagantly, and -- well, I don't know what I was expecting, but it wasn't that. I like how you describe it.

Right, Craig. The ending isn't a stunning jaw-dropping type thing, but it fits the tone of the movie perfectly. I had only read one review, and that was months ago, so I didn't really remember any of the details.