What a lovely little film this is. Based on a Haruki Murakami short story, and clocking in at a mere 75 minutes, this minimalist gem carries a surprising amount of emotional weight.

The opening ten minutes provide the backstory for our oddly-named protagonist. Takitani Shozaburo is a Japanese jazz trombone player who was captured in China during World War II. After the war he returns to Japan, marries, and the following year the couple has a son. The boy’s mother dies soon after he is born, and Shozaburo gives him the Americanized name Tony, liking the sound of it.

Tony’s father continues to travel as a musician, and Tony grows up basically alone; among other things his Western name is a hindrance to the development of friendships. But he likes to draw, and eventually becomes an accomplished illustrator, one who excels at drawing cars and machines, but whose work shows little emotion despite its technical skill.

This prelude to Tony’s story is told largely via voiceover narration and a series of brief visual vignettes, during which the camera remains mostly static within each scene, but pans from scene to scene directly from left-to-right like in a slide show. These movements mark the passage of time, as in the technique in older films of having calendar pages flip or be blown off by the wind. At first this technique may seem a little forced and perhaps distracting, but as you settle in with it and the film progresses it becomes quite fitting and natural to the way in which director Jun Ichikawa tells the story.

After this prelude we see Tony as a successful technical artist, still alone in early middle age. One day he meets a pretty young client, and after a time he asks her out. They go on a few dates, seemingly hitting it off, and Tony proposes. Surprisingly, the girl, Eiko, agrees to think about it, and eventually says yes. They marry, but not long afterwards, and despite their apparent happiness, Tony finds out something disturbing about his new bride: she buys an “alarming number” of designer clothes.

Eventually Tony and Eiko talk about this obsession of Eiko’s, and she agrees to cut back. But an obsession is an obsession, this one takes a tragic turn, and again Tony finds himself faced with the possibility of being alone. His attempts to deal with this make up the remainder of the story.

The overall feel of this film is that of a fable, or even a sort of visual poem. Dialogue is sparse – most of the story is told by the conjunction of the narration and the visuals, and the narration itself has the matter-of-fact quality of a folktale. Issey Ogata, who plays both Tony and his father, and who is better known in Japan as a comedian and comic actor, captures both Tony’s lonely world-weariness and his hope perfectly. It’s a quietly wonderful performance. And Rie Miyazawa, who plays both Eiko and another girl, Hisako, that Tony meets later in the film, plays both of these quite different girls so well that only the credits give away the fact that it’s the same actress.

The score, by Ryuichi Sakamoto, is sparse too – all solo piano, made up of haunting melancholy themes for the most part, but punctuated occasionally by the more upbeat, almost jazzy moments that accompany the film’s brighter scenes.

On a surface level, then, the whole thing seems very simple. But the excellent understated performances, the uncomplicated storytelling, and the visual poetry combine in a way which makes Tony Takitani deeper and richer than it appears. And the gentle touch of irony with which the film ends is perfect. Ultimately what we have here is a jewel of small beauty -- a fine poetic meditation on life and loneliness, love and memory. 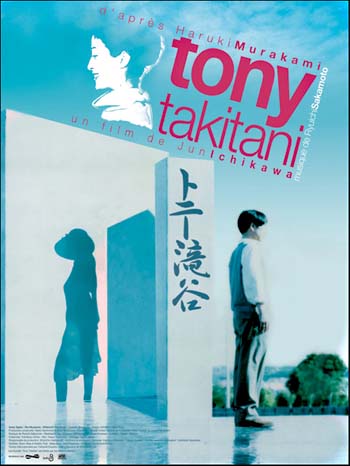 When he is first talking about Eiko, watching her walk up to his building, doesn't he say that he really like the way she inhabits her clothes or something like that? I know it's not the right word.

As the movie progresses, her obsession seems so over-the-top, so crazy, but it's just a visual presentation of any addiction, really.

I liked this movie but it made me really uneasy.

I don't remember the exact wording but, yes, he says that he's never seen a woman who inhabits her clothes the way Eiko does.

I think that the presentation of her obsession in the film's matter-of-fact way is part of what gives it the feel of a fable.

I can't say it made me uneasy, but it's certainly more thought-provoking than its brevity and (seeming) simplicity would lead you to believe.

Mac, are you going to create a "complete list" for this series like you did for the authors? Because if so I want to pass it on to some interested folks.

Yes. I intended to do it last week. This week for sure.

I could have sworn I did that.

I should have put a smile after that.

I'm well aware that I haven't done this. Not sure I ever fully straightened out the Authors list, either.

Btw, I could have sworn I left a comment at your blog yesterday, on the bookstore post. But it never appeared, and when I tried to post again I couldn't get past the verification. Well, I say "couldn't"--I gave up in vexation after failing twice to pick the right pictures. Must be something wrong with it.:-)

That's funny. I read the comment in my email. I'll have to retrieve it.

(I sent this around to a few friends this morning, and thought some of you would also be interested.)

Watched ‘Anthropoid’ last night, the recent movie about the Czech Resistance’s plot to assassinate Reinhard Heydrich, Hitler’s third in command and the man in charge of the occupation of Prague. The film got moderately good reviews (59 on MC, 72 on RT) but came and went rather quickly. As it turns out it’s a good movie and is well worth watching. The acting is uniformly good (almost all the actors are Czechs except the two leads and two prominent secondary characters -- Toby Jones plays one of the leaders of the Resistance) and while the first half-our or so is a little slow, as it’s mostly set-up, the rest of the movie more than makes up for it, with the last third being very riveting.

After I watched it I watched the “making of” feature that accompanied it on the DVD. One of the most fascinating things about the movie is the historical accuracy. Great efforts were made by the director to get everything historically right, and where the crew could not film at the actual sites duplicates were painstakingly created. The most amazing of these was the full size recreation of the Cathedral of Sts. Cyril and Methodius in Prague, where the finale takes place. They obviously couldn’t film a firefight in an existing operational cathedral, so they recreated it on a set down to the last detail, in exact scale.

Anyways, have a look, and if you can, watch the “making of” feature even if you don’t normally watch those things (I generally do). It’s fascinating

Good grief (re the re-creation of the cathedral). What was their budget?!?

I tend to skip the "making of" things because they tend to get in the way of my accepting the illusion of movies in general. I remember watching one for some kind of action movie that included filming of the filming of a scene where somebody was sneaking around a corridor with a gun. In the movie it was a very suspenseful scene, but to step back and see the set--the corridor for instance being wide open on one side--the cameras, the crew, etc. with the actor in the middle made it ludicrous: just a grown-up kid playing an elaborate game of pretend.

But still, I do watch them occasionally, and sometimes they can be quite interesting.

Wikipedia says that the budget was only $9 million! Wonder how much of that was the Cathedral?

It also says that the movie made only $4.8 million at the box office, which is a shame.

Couldn't resist checking on the re-creation of that cathedral and found that it was done at Barrandov Studios in the Czech Republic. The Wikipedia article on the studios says that they grew in a big way during the Nazi occupation because the Nazis wanted to make them the equal of the film studios in Berlin and Munich, and that the three huge stages they built are "the main attraction to film-makers throughout the world". Does irony cover that?

Also found a piece in the Hollywood Reporter that says “shooting on location in Prague was a natural choice for the producers of Anthropoid", largely because the Czech government has an incentives system in place that provides substantial rebates for film productions.

Thanks, Marianne. I wondered about that, because there's no way a film like that could be made in the States or the UK on that budget.

I wondered if maybe they just had very low labor costs in the Czech Republic.