Imagine my surprise. Although I had read about it in Rolling Stone magazine and bought the cassette tape soon upon its release I was not prepared for the first song, or many thereafter. Rain Dogs sounded shockingly original and amazingly good, and since then I have collected through the years most of Tom Waits’ other recordings.

There was a time several years ago when he went on some sort of limited tour and came to Mobile. I was flying out to El Paso so could not attend. Strangely he played El Paso too, but I missed that show as well. Friends in both cities enjoyed the concert and told me tales. Who goes on tour and puts Mobile, Alabama and El Paso, Texas on their itinerary? Apparently, Tom Waits does. I may never see him in concert.

But there are the recordings. Through the years and buying his music I found out that Waits began as sort of a beatnik poet singer, speaking and singing lazily amusing and nice songs. Something happened around the time he decided to record Swordfishtrombones, the album which precedes Rain Dogs. I’m not sure what happened, but I sure do like it.

Waits sings in a rough way, he sings about dispossessed people and their circumstances, he and his musicians use real instruments that were not being used by just about anyone else I might have been listening to in 1985. If we try to remember music in the mid-80s it is not entirely heartening; there were smooth pop vocals with synthesizers, and artists wearing make-up with perhaps their hair sculpted in a certain way. They were not all bad, but they are not very memorable. The good music remains from that era, of course. But no one else was like Waits.

Uncle Vernon
Uncle Vernon
Independent as a
Hog on ice
He’s a big shot down there
At the slaughterhouse
He plays accordion
For Mr. Weiss

There’s more to consider in those few lines than in the entirety of most songs, but what jumps out to me when I hear it is, “He’s a big shot down there at the slaughterhouse”. Who says this? I can hear Waits’ voice telling me this in conversation, but I cannot hear it coming out of my own mouth. Not only is Uncle Vernon in charge down at the slaughterhouse, but after hours he’s apparently playing the accordion somewhere for this Weiss character.

Glancing at the Wikipedia page for the album, along with the accordion here are some other instruments used to make the wonderful sounds on Rain Dogs: pump organ, harmonium, marimba, trombone, trumpet, baritone sax, tenor sax, double bass, parade drum … you get the point. Missing Persons and The Human League did not use any of these instruments for their recordings. These “real instruments” give the album an earthy, sometimes New Orleans kind of feel, punctuated with Tom’s ever-changing vocals sometimes barked, crooned, growled, spit … and other ways that don’t quickly come to mind. It is all quite affecting, reverberating, and memorable. Some of the music has a calliope feel to me … I write that and I’m not really sure what it means, but I think I am correct.

There are a few songs on the album that are for the most part sung “straight”, as in he just sings them and what makes them different from his previous (previous to Swordfishtrombones, that is) recordings is more the backup music. Two of these are: “Time”, and “Downtown Train”. The former has a line that for some reason I’ve been thinking of now for 30 years, and to me is wonderfully poetic:

And you’re east of East St. Louis
And the wind is making speeches
And the rain sounds like a round of applause

The latter was covered by Rod Stewart in 1989 and became a hit single for him. A lot of Waits is covered by other artists. I think his songs are so interesting to other artists because, a) the lyrics tend to be interesting, and b) they know that their versions will sound nothing like Waits. Songs covered and sung the same way as the original are just not as compelling. I sort of like Rod’s version more than the original.

Back during the time that this album had come out and I was driving around Miami in my Ford Pinto listening to it a lot through a sad little improvised cassette deck situation I had going, a friend of mine named John decided to get into a fracas while driving with a crazy woman. John was/is of course crazy too, and I was present during the episode. So, I’m driving down I-95 to the courthouse in downtown Miami to give a deposition which eventually helped to have the entire thing thrown out of court and not adversely affect John’s medical school career (yes, he is now a doctor!) listening to Rain Dogs in my Pinto. The song “Gun Street Girl” has a refrain, which goes:

I’m not sure why the “John” in the song was “gone to Indiana”, but all I could think is that my friend John would be sent to some sort of penitentiary there. It was a bad omen which luckily did not come true (I think his patients like him).

Those are all the musings I can come up with about Rain Dogs. The fun thing about this series is I feel the need to listen several times to an album before writing about it. It had been a long time since I listened to Rain Dogs, but BOY is this album good! I found myself driving slowly to work the first morning, wanting to delay my arrival and hear more music. Waits isn’t for everyone, but if you like him I believe this is a very good place to start. 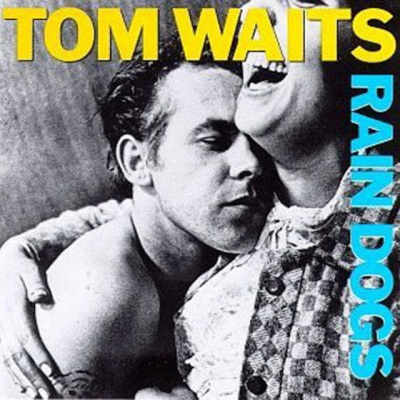 —Stu Moore is an occasional contributor to this blog. He likes literature and music and tries not to think about politics.

I'm so glad that you wrote about this album, Stu. It is one of my favourites. It was the first Tom Waits record I heard, and I still remember how startled I was when I heard the way he barked out the first lines of the first song:

We sail tonight for Singapore!
We're all as mad as hatters here.
I've fallen for a tawny Moor.
Took off to the land of Nod.
Drank with all the Chinamen,
Walked the sewers (shores?) of Paris.
I danced along a coloured wind,
Dangled from a rope of sand.
You must say goodbye to me.

There are so many wonderful songs, and wonderful turns of phrase. You've mentioned a few, but I'll chime in with praise for "Tango Till They're Sore", "Shore Leave", and "Rain Dogs".

The last time I listened to this album, which was about a year ago, I thought that the differences between it and Waits' previous records were not so radical as I had previously thought. Yes, the instrumentation is bizarre, and the voice is unusual, but quite a few of the songs, suitably arranged, would not have been entirely out of place on a record like "Small Change".

I remember the startling effect of "Singapore," too. I haven't heard this album for a while, and naturally this makes me want to. As I recall it wasn't my favorite of the several somewhat similar albums he made in the '80s, but it's still great.

I figured the "John, John" refrain came from some folk song. It sounds a bit like various "long gone" refrains. But I don't know.

Oh, and I was at the Mobile show that Stu missed. It was great. I talked about it here at the time, I'm sure.

I've also seen Waits live, once. It was on the Mule Variations tour, so late 1990s, I think. It was a terrific night. I realized, what is not always clear from his records, that he is quite a funny man. It was one of the best concerts I've been to.

Those are all great songs, Craig! I'm not sure there is one on the album that I don't like, just some strike me more than others. "Singapore" is indeed a very strong opening statement and made a very big impression when I first put that cassette tape in my stereo back in 1985.

Marc Ribot is so great.

Finally took time to listen to this for the first time in at least 5 or 6 years, probably more. It is truly great.

Some interesting information about the title and cover: