I used to be one of those people who thought the Beatles were the best musicians ever. I thought their compositions, arrangements, instrumentation, etc. were genius. My opinion of them has diminished considerably in the past few years. Now I find their music to be simplistic. McCartney is a great tune-smith and their instrumental work is very good, even creative (although not genius), but the lyrics are often trite or sophomoric, relying on adolescent cleverness. The arrangements were undoubtedly ahead of their time for rock ’n’ roll groups, but they certainly weren’t using many “tricks” that hadn’t already been pioneered by Bing Crosby, Les Paul, Chet Atkins, or even Phil Spector. The Beach Boys were much better at innovations in complex compositions, arrangements and harmonies (see Pet Sounds).

Two things helped change my opinion. First, my kids and I embarked on a multi-year deep study of music, both classical and popular. I listened to a lot of Mozart, Bach, Tchaikovsky, etc. Plus, I listed to a lot of really good country music, swing, blues, American standards, etc. The Beatles just didn’t compare. I began to be irritated at McCartney’s brag about not knowing how to read music. How is that a good thing?

The second thing that helped change my mind happened in May of 2014. My son posted the following video on FB.

I was immediately captivated by the musicality, the instrumentation, the vocals and harmonies and the lyrics. Eva Holbrook seemed to have captured the experience of a pre-teen crush on a young man who was spending time with a young woman. The perspective is perfect, including the way the girl notices the woman’s “pretty shoes.” The video (produced by Sarah Holbrook) was great.

I began to listen to the rest of the album from which it came. I felt that these girls on their first album equaled or beat anything the Beatles had done. Admittedly, most of them were already in their early or mid-20s when they recorded this album, rather than barely or not even out of the teens, like the Beatles.

SHEL is four Holbrook sisters from Fort Collins, Colorado. The name comes from their first names: Sarah, Hannah, Eva, and Liza. Their instruments are in order violin, keyboard, mandolin, and percussion. I am especially impressed not only by their superior competence on their individual instruments (including Liza on percussion), but by the way their arrangements weave the four sounds together. The mandolin really adds to the uniqueness of their style. Eva is really good, as can be heard on “Tuscany.” The harmonies add to the beauty of already complex compositions.

The album is decidedly melancholy. There is lots of pain and unrequited love. The first cut, “Paint My Life,” is sparser and darker than you would expect on the first cut of a first album. It is haunting. The second cut, “Like Minded Fool,” begins with a line that perfectly matches the melody:

Go tell my friends I fell again.
They’ll lift me up and set my broken wings to the wind.

Some of the songs are almost too painful (“Stained”).

The lyrics, although they do veer into triteness at times (“Vinyl Memories,” “On My Way”), are often poetically rich and psychologically insightful. “Wise Old Owl” expresses the angst of a woman who wants to know why she keeps failing at love, but when she asks the Wise Old Owl, all he says is: “Ooh woo, ooh woo, ooh woo, ooh woo.”

I especially like “When the Dragon Came Down,” a fantasy from the perspective of a king whose Queen and kingdom were destroyed by a dragon.

Lay your head down, close your eyes
Sleeping on a golden bed, cold as ice
Oh is she really gone
I lost my queen along with my crown
When the Dragon came down
Oh deep within my sleep
Awakened by the sound of her scream
The Dragon came down like a dream

The lyrics in this one are at times enigmatic, which I usually don’t like, but it works here.

One of the best cuts on the album is a cover of Led Zepplin’s “Battle of Evermore.” Their version beats by a long shot both Led Zepplin’s original from Led Zepplin IV and the famous Heart cover. Compare them:

Another interesting comparison is between “The Man Who Was the Circus” and the Beatles “Being for the Benefit of Mr. Kite.”

SHEL’s song really has depth compared to the triteness of the Beatles' song.

The most fun song on the CD, but not the vinyl, is light-hearted and frivolous, “The Latest and Greatest Blueberry Rubber Band.” It is just plain silly, to quote Veggie Tales. This version is not the one that appears on the CD.

SHEL’s second album, Just Crazy Enough, is not nearly as good. They seem to have lost some of the innocence from the first album. Plus, it is much more “pop.” The songs and arrangements are simpler and more repetitive. I hope they return to the richness of their first album.

I know that my musical tastes differ significantly from many of the people on this blog, but I hope at least you like steam punk.

Here’s a picture of the Gotchers with SHEL at their concert in Green Bay in August, 2014. Who would have thought that I would become the fan of a new group at 55! 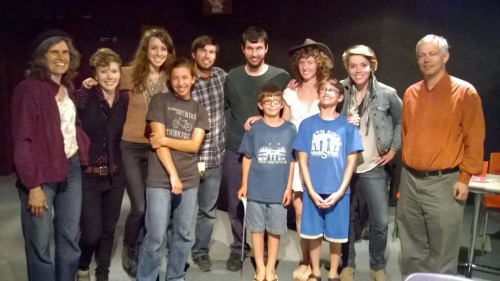 You posted about them a good while back and I liked what I heard, but never pursued it further. I'm definitely going to now. They're great. I see eMusic has the mp3 and will probably get that, but I wonder if there is anything in the cd packaging to make it more desirable

I must say, I'm surprised to hear of your fall from Beatlemaniac grace.

I don't think there is anything in the CD packaging that is important.

I don't see a connection with the band though.

Yes, I am familiar with the term. I think Robert put it there to be funny, you may not agree with me about music but I hope you like steampunk! :)

I was once engaged to a woman who made steampunk jewelry. And I do like Tim Powers and James Blaylock. But that's about as far as it goes with me.

There a good bit of steampunk in Ghibli films, and I like them.

I was basically thinking of this: "the essence of steampunk is homage to vintage fashion with a modern, sassy twist"

Glad I read that linked Wikipedia entry on steampunk. Have seen the term but that’s all. And never really knew just what to make of the movie Brazil, but the entry says it “was an important early cinematic influence that helped codify the aesthetics of the genre”.

Hmm, that never would have occurred to me, but then I don't really remember that much about the movie.

I must be one of a very few Sixties relics who don't know that Led Zeppelin song.

SHEL are amazing! Your link for the SHEL version of Battle of Evermore is broken. Here's a good link to SHEL's fabulous 2012 performance of that song: https://youtu.be/ogw15jdM_Yc

"Blocked on copyright grounds." I knew I had used that link. Anyway, thanks for the good link.