This is not going to be an elaborate and insightful review of this album or Atkins. What can be said? He is the consummate musician, an amazing and versatile guitarist. He doesn’t pretend to be relevant or important or socially significant or insightful. He simply entertains by producing dazzling guitar. And, unlike, say, Les Paul, he is never merely showing off. Whatever he does, no matter how virtuosic, adds to the musicality of the piece.

He’s also almost single-handedly responsible, as A & R Man for RCA in the 1950s, for the Nashville sound. 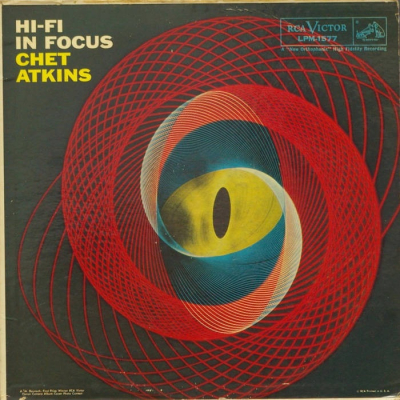 This album is one of the few LPs that my parents had in the house when I was a kid. I listened to it a lot. It was produced by RCA to show off their high-fidelity technology. It also is considered one of Atkins’s best albums qua albums. The other one that comes to mind is the 1970s album Chester and Lester he made with Les Paul. Atkins influenced many guitarists, including George Harrison and Mark Knopfler.

Atkins’s usual technique a three-finger picking style with an alternating bass, palming the bass strings. He could use it so creatively and with such variety even within a song that it doesn’t get boring. It can almost seem like a walking bassline. A great example is “Ain’t Misbehavin’”. Atkins is “country,” but he has so many other influences, especially jazz. He does many other rhythms and moods, such as waltzes (“Shadow Waltz”) and Latin beats (“Anna”). He has lots of sweet harmonies.

Only some of Hi-Fi in Focus is available on YouTube. None on Spotify, but I found this site whereon you can listen to the whole thing.

One of my favorites is “Walk, Don’t Run”.

Here is the Ventures' version (with a wet guitar sound).

I don’t think one would score Atkins high as a classical guitarist, but he does have good taste.

Speaking of Knopfler, here is a funny duet between him and Atkins. Atkin’s voice is very recognizable.

I still have the LP.

Great stuff, Robert! I own the Chester and Lester CD, and the one he made with Mark Knopfler. Back in 2001 I drove from Silver City, New Mexico where I was living at the time to Las Vegas, Nevada to visit a friend there who was in the guitar music publishing business for years. I remember that while I was there he got a phone call from his old partner telling him Chet Atkins had died. So in response to the unasked question, "Where were you when Chet died?" there is the answer.

I kinda forgot about Atkins until the 1990s when he started making frequent guest appearances on A Prairie Home Companion. He had a dry sense of humor that I really like.

I've never actually heard much of his music. Everybody who pays attention at all to popular music knows his name, and that he's a great guitar player, but he didn't seem to have the same kind of idolizing fans that some others did, even in the country-ish vein--Doc Watson, for instance. I think that's because the basic Nashville style is sort of slick and bland, and doesn't emphasize instrumental work, even though there are some awesome players doing it. I never heard him on PHC but he's funny on that duet with Knopfler.

I guess I never thought of Atkins as bland. He certainly is into instrumental work. I guess I like slick. Rough usually doesn't do much for me. There are exceptions, like some of Neil Young's stuff. I hope to do a post on one of his early solo albums after Easter.

No, he's not bland, but the general Nashville style is/was, at least to my taste--the arrangements, etc. are very controlled. Seems like he stretched out more in his later years. I'd like to hear that collaboration with Les Paul.

Les Paul I don't care for. He's too tricksy.

Speaking of Les Paul, here is Stan Freberg's send up of "The World is Waiting for the Sunrise." Here is the originhal.

Les Paul is from Waukesha, Wisconsin, the next town over. The downtown has these giant statues of electric guitars all over.

The Chester and Lester cd is really great, Mac.

One of these days I'll hear it...this series is going to overwhelm me with things to listen to like the others overwhelmed me with movies and books.

The Freberg thing is pretty funny, Robert. Sounds like Spike Jones (a compliment).

I have a friend who grew up in Lubbock. Once when she was visiting there she sent me a postcard of the Buddy Holly statue, which I kept at my desk at work for years. Probably still around here somewhere.

Here is Atkins and Paul doing "The World is Waiting for the Sunrise" together from the Chester and Lester album.

Just now had time to listen to this. It made me smile.