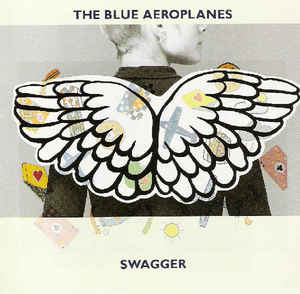 What’s not to like about a band made up of three guitarists, bass, drums, a singer who doesn’t sing, and a classically-trained interpretive dancer? Bristol, England’s Blue Aeroplanes had put out several well-received independent albums in the 1980’s but it was their 1990 major label debut Swagger that gained them their first large hearing. I first heard of them when I saw the video for the song “…And Stones” on MTV and liked it instantly, struck by the combination of guitar drive with a dance beat. A short time later I purchased the album on cassette (one did that in those days, being unable to sample records ahead of time) and soon realized that I had run across a new favorite, one of those rare albums that didn’t have a single track that I disliked. Not long after that I bought the CD, and kept the cassette to play in the car.

By the end of the 1980’s fans of guitar-led rock didn’t have much to get enthused about, given the prominence of synth bands throughout that decade. In the early to mid-80’s there were a few “big guitar” bands (Big Country, The Chameleons, and The Sound come to mind) but they were a minority, and unless you liked heavy metal or arena rock there just wasn’t much good guitar music floating around out there. This began to change in the late 80’s with the rise of “shoegaze” in the U.K. and “grunge” in the U.S., but neither of these really got a lot of attention until a couple years later and if you weren’t paying close attention early examples of those were easy to miss.

Swagger, on the other hand, was not only guitar-driven, but guitar-led: throughout the album it was the guitars that carried the melodies, not the voice, and even so the tunes were quite catchy. The instrumental mix featured both the jangly guitar style prevalent in the 80’s and the “chiming” approach featured in some of the post-punk bands, a somewhat unusual combination for the time.

Lead man Gerard Langley sang/spoke his lyrics with the rhythms of the songs, which were often very melodic. But it was the guitars that moved the songs along melodically. There was nothing else at the time that sounded anything like this.

After hearing only the one song on MTV, I can still remember listening to the opening of the first song, “Jacket Hangs,” for the first time. For the first 25 seconds or so you might think you’ve mistakenly popped some Southern rock disc, but as soon as the vocal starts all bets are off. Langley does not sing, as I’ve said, but the lead guitar line continues alongside the vocal after the intro is done. Lead guitarist Angelo Bruschini doesn’t drop back and revert to rhythm playing as would happen in a typical rock song. That one memorable guitar riff continues throughout. But notice how many times the guitars change what they’re doing. So much is going on that it makes the song seem longer than its short 3:43 length.

(The guy in the white shirt is Wojtek Dmochowski, a classically trained dancer, who is an official band member and who dances onstage with the band during every show. He’s still at it 25 years later, but not surprisingly doesn’t quite have the moves he used to, alas.)

The track I first heard on MTV, “…And Stones,” is a faster number, much more of a dance song, but still has that same basic guitar-led structure. The guitars carry both the chord progression and what serves as the melody, with Langley speaking the accompanying lyric. On the album this song runs to five-and-a-half minutes and is preceded by one of my favorite segues in all of pop music, but the single version cuts it back to about 3:20 here. The guitars on this song are excellent, as are the bass and drum work.

On the two or three quieter songs the same basic pattern holds:

If you like these three songs I can almost guarantee you’ll like the rest. Another highlight is a setting of the Sylvia Plath poem, “The Applicant,” performed as a rocker and spoken by Langley with the perfect amount of bite.

The Blue Aeroplanes never quite matched the level of Swagger on subsequent albums, although the following two, Beat Songs and Life Model are still pretty darn good. But this one remains in my opinion one of the best albums of the 90’s, and I’ve listened to it dozens of times over the past 27 years, and have never grown tired of it.

Well, you managed to come up with a band that I'd never even heard of. "Never heard" is not unusual but "never heard of" is. I like these tracks.

Yeah, they're one of those bands that is much better known in the U.K. but has largely flown under the radar (ahem) over here.

Not sure if I'd have ever heard of them myself if not for that chance MTV video.

This is good news on the music front:

I subscribed to Rdio and really liked it. I hate Spotify. The new Pandora service uses a lot of technology that they bought from Rdio when it folded. But apparently it's initially going to be available for hand-helds, which is a big restriction for me.

I like the third Blue Aeroplane track the best of these three. I basically like what they're doing but its appeal is lessened by the fact that I can't understand the words at many points, and for the whole thing to work I really need to be able to understand them, without working at it, and they need to be good. I think the latter is the case but only on the quieter track can I get them fairly easily. It's partly the accent. I think even if he were reciting the words with no accompaniment I'd still miss things. If he were on tv I'd turn on the captions. :-) Partly it's my hearing, too, no doubt.

The way he delivers the vocals reminds me of Lou Reed.

Maclin, That's because you weren't.

I know. I was probably 16 at the time, 17 at most, and the phrase was not part of the vocabulary in small-town Alabama at the time.

Yes, it is Lou Reed-ish, also Dylan-ish. I like the sound of it a lot.

I don't really pay too much attention to the lyrics here, although I do appreciate some of the wordplay. I tend to think of the words as a sort of hipster stream-of-consciousness thing, which is a part of the whole "song-package." And I like the package. In that sense it's somewhat similar to the way I listen to early REM or Cocteau Twins.

I can't understand REM and CT at all. In the case of CT that's not surprising since in their earlier (and imo best) stuff she generally isn't singing words at all. But both of those have melodies, really great ones in the case of the Cocteaus.

True. Then again, with the Aeroplanes, the guitar lines carry a lot of the melody. Most of the time if I find myself humming along, it's one of the guitar parts I'm humming.

A funny thing: a habit I've been trying unsuccessfully to break is browsing the new releases list on eMusic. If you don't see something like this regularly, you probably have no idea of how many cds (or "cds") are released every day--and eMusic doesn't even have the big labels. Hundreds every day, 50% or so of which are disposable dance tracks. I keep scanning the lists, hoping to spy something great. Yesterday what should appear but half a dozen or so albums by the Blue Aeroplanes. Not Swagger, unfortunately, though there is a "best of" compilation that includes the first two tracks in your post.

That's funny. You don't think that had anything to do with the fact that maybe you had previously googled them or something? You know how these search things work...

They do a good cover of Paul Simon's "Boy in the Bubble," which was a minor "alternative" success for them over here, and I think is the only song I've ever heard of theirs on the radio. Another favorite tune of mine is "Mercury," from the Life Model album.

No, it's just a static list, not anything user-specific. The compilation is called Huh!, btw.

Yes, I've seen that one.

Used copies of the first three major albums are generally pretty cheap on Amazon. I think that they were deleted or something when the record label (Chrysalis?) was acquired by someone else in the mid 90's.

Couldn't remember on which thread we were recently talking about David Lynch, but in case you hadn't seen it, last year's somewhat Lynchian film Nocturnal Animals has come out on DVD.

I say "somewhat" Lynchian because while it has some stylistic and narrative similarities to Lynch's work, it differs in that it is somewhat more straightforward in plot, and more directly displays its moral sensibilities.

Amy Adams and Jake Gyllenhaal both turn in very good lead performances, and Michael Shannon and Aaron Taylor-Johnson are excellent in important supporting roles (Shannon was nominated for an Oscar, and Taylor-Johnson won the Golden Globe.)

~~A "story inside a story," in which the first part follows a woman named Susan who receives a book manuscript from her ex-husband, a man whom she left 20 years earlier, asking for her opinion. The second element follows the actual manuscript, called "Nocturnal Animals," which revolves around a man whose family vacation turns violent and deadly. It also continues to follow the story of Susan, who finds herself recalling her first marriage and confronting some dark truths about herself.~~

I would add that a key element is that it's the reading of her ex's novel that brings her to confront those "dark truths," and the skillful weaving together of the two narrative strands is one of the things that makes the film work so well.

The level of "adult" matter in the film is no worse than that that shows up in Lynch's films, although I must say that the first few minutes of the film are somewhat disturbing, albeit in an unusual way, one having nothing to do with either sex or violence. My first reaction was "What the hell?," and I sincerely hoped that this opening sequence didn't telegraph the content of the rest of the movie. Well, it doesn't, but it does set a sort of tone, and the relevance of the scene becomes apparent a little later on.

Anyways, if you like Lynch, or "neo-noir" in general, I'd highly recommended it.

Update: Well, apparently Nocturnal Animals has been out on DVD for a month but I just noticed it yesterday.