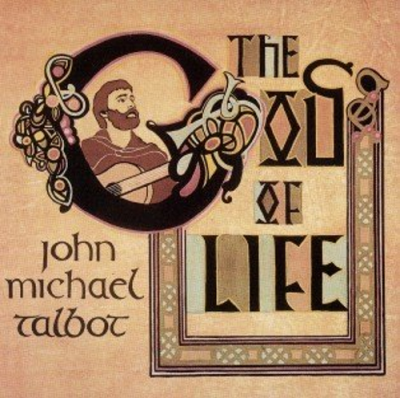 Although I’m only a mild fan of John Michael Talbot’s music, there are three of his albums that I place very high on my list of favorites. Two of them, The Painter and No Longer Strangers, were made with his brother Terry. The Painter was the first music I had ever heard of JMT. When I first met my bride-to-be she played it for me. She used to use it to warm up before running. We wound up using one of the songs, “The Mystery,” as the (recorded) recessional at our wedding.

It seems to me that the influence of Terry on these albums raises it above most of JMT’s work, which is often musically repetitive and lyrically overly abstract, sounding like a treatise. Terry is first much more a story-teller. He is also has a more concrete social consciousness. Even in the days when the brothers were playing with Mason Proffit Terry contributed a burning prophetic fire to their lyrics. One of my other favorite albums of all time is Terry Talbot’s solo album Sings Stories of Jesus.  The album isn’t available anywhere that I can figure out, but there are a couple of videos on YouTube that give you a taste of what it is like.

But this post isn’t about any of these albums. It is about God of Life (1984). This album was produced during JMT’s “Celtic” period. All the songs have a distinctive Celtic feel, with lots of penny-whistles, uilleann pipes, and harmonic fifths. The orchestration is never overly lush. It is vigorous when it needs to be (“Peace”) and gentle and unassuming at other times (“Betwixt Me”, “Healer of My Soul”). There is a fun, lilting instrumental called “The Meadow.” There is also some great cello work.

The lyrics on the album, borrowed from ancient Celtic prayers, are very concrete, Trinitarian, and conscious of God’s providence and closeness.

I love the concrete imagery of baptism in “In the Name of God.”

There is a strong sense of the role that the way Christ is in us to strengthen our social relations.

Bless O Christ my face
Let my face now bless everything
Bless oh Christ mine eyes
Let all my eyes see be blessed with peace.

One cool thing is his use of banjo (“Belfast”). JMT was a nationally ranked banjo player in his youth. He really can make it sound Celtic. “Belfast” was in fact a piece from their Mason Proffit days that he recycled. I wish you could compare them. You’ll have to go to Spotify, I guess. Here JMT is playing it solo on banjo without the orchestration. Here is the Mason Proffit cut, with “Belfast” at the end of “Black September,” about the Palestinian/Jewish violence in 1972.

My favorite, though, is the plaintive and soulful “Healer of My Soul.” esp. the lyric:

I tear up with this one.

Lots of JMT’s music is not available on YouTube. I think he keeps tight control over his intellectual property.

I played guitar with JMT once. Kathy and I were on a retreat that he sponsored. After a prayer session I was sitting on the stage in a chapel playing some songs when he walked in and sat down. We played a couple of simple tunes together, I think. Then we asked him to play “The Mystery” for us, since we had had it at our wedding. He tried, but he could hardly remember it.

No picture this time.

It never fails to amaze me how much music, literature and film are out there that I am completely unaware of. This is considering that I spend a lot of my time interested in these facets of "the arts". I notice that this album is free for streaming if you are an Amazon Prime drone (as I currently am), so I will get it and listen while driving. I need meditations on God right now.

"how much"--I know, as I think I mentioned the other day I really felt overwhelmed by the 52 movies.

I remember listening to the Talbots back in the early "Jesus Music" days. I had both brothers' first couple solo LP's, as well as the "Reborn" album they did together. I saw Terry in concert in 1979, and bought a copy of his "Cradle of Love" album for the girl I was dating at the time.

I've never heard this album, but I'm going to try to do so.

I have one JMT album; I think it is called "Meditations from Solitude". Musically I find it a bit gauzy, but the words of the songs are beautiful and profound, and there is a lovely, gentle spirit about it.

Long ago, I had 5 or 6 albums--cassette tapes--by JMT. One of them was this album. I used to listen to them when I was nursing my baby and it was really nice. I used to play and sing his songs pretty frequently.

Once, I went on a retreat that he gave--a very good retreat--on the writings of the Dessert Fathers.

I've visited Little Portion twice, and it appealed in a way to my CetT self, but I never thought I could live there.

The other night I was going through some boxes of stuff I had in storage and found a box of LPs that I had completely forgot I had. Turns out that the first two JMT solo records were among them.

What's ironic is that it was the very recent hooking up of my old turntable that prompted me to clean out the storage unit in the first place. I was in there looking for phono jacks, realized what a mess it was, and decided to start cleaning it out.

I haven't had a chance to listen to the JMT records yet, as the box contained some other stuff I wanted to listen to first, but I'll get to them. Among the other finds were a few old folk and country records from when I was a kid, and some oddball CCM stuff from the 80's. These had all been boxed up since 2006, and I had completely forgotten about them. It was like finding a time capsule.

I believe Paul Prudhomme was one of the Dessert Fathers, may he rest in peace.

I don't know where that came from but it's funny.

What fun, to find a forgotten box of LPs!

"What fun, to find a forgotten box of LPs!"

Yeah, there are about 75 altogether, most of them things that maybe never became available on CD, or that I never switched over for some reason. I know had put a few of them on cassette at some point, but I haven't listened to any cassettes in ages either.

I would have to buy a turntable if that happened.

Or just give away your find.

I might actually do that, but I'd have to let my son go through them first.

But it's not going to happen unless the person who stole my albums enters a 12-Step program and feels like he or she needs to make amends to me by returning them.

They've probably passed through multiple hands since then, and maybe to the dump. I assume this was before the Great Vinyl Revival.

I hadn't really thought about it before, but while we no longer have a CD player in the house (or the car - or even the newest laptop), the two oldest children have both acquired record players.

Oh yes, it's quite the fashion. I think there is also a bit of a cassette revival going on now among hipsters. Or maybe it's just a bit of nostalgia for people of a certain age. Vinyl never really went away. There was always a diehard contingent insisting that it sounds better. I don't think that's the case with cassettes.

My 34 year old nephew has been a vinyl fanatic since his teens.

The problem with cassettes is that no matter how careful you are with them, they eventually get stretched or the tape gets twisted or they get caught in tape player or something. The more you like them and play them, the faster they go.

They also wear quickly and noticeably. With vinyl you get the clicks and pops, but I think the surface in general holds up better, especially on records produced before sometime in the '70s. I have a number from the '60s that were played a lot and not treated all that well, but still sound remarkably good.