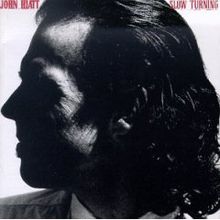 Time is short and here’s the damn thing about it
You’re gonna die, gonna die for sure
And you can learn to live with love or without it
But there ain’t no cure

The lyrics above are from the title track to John Hiatt’s very excellent 1988 release Slow Turning. I feel like some of my favorite albums have helped me to get through life by presenting a vision that is a positive outlook confirming my worldview, and this is one of them.

Sometime back in the early 90s I was hanging out with a few friends of mine in Fort Lauderdale, Florida on a weekend night and they had the radio on. The DJ said, “John Hiatt and the Guilty Dogs are getting ready to hit the stage here at the Button South in about an hour from now”, or something along those lines. I turned to Jon and Dave and said, “John Hiatt guys, are you in??!!” and was greeted with unenthusiastic shrugs. I went down to the Stumobile alone and drove to the Button South, paid $15 to get in, and enjoyed an absolutely fabulous show with about 30 other John Hiatt diehards. It is really something to be able to stand quite easily right at the front of a stage in a small venue and watch one of your recording heroes. There was a guy standing just to the left of me wearing a cowboy hat, and he kept trying to give it to Hiatt, who continued to ignore him. Finally, Hiatt gave in and took the hat saying, “This is a mighty fine hat, my friend!”, and proceeded to hand it to his drummer who wore it for the rest of their set. The guy was ecstatic!

I have seen Hiatt in concert probably another six or seven times since that night. The crowds have gotten bigger, and I am further away, but he still puts on a great show.

Slow Turning followed Hiatt’s commercial breakthrough and most critically praised album of his career, Bring the Family. While Bring the Family is a truly great album with superb backing musicians and an array of great songs, it is a little too somber and elegiac for my taste and ability to get over-enthusiastic about. It contains Hiatt’s most widely recognized song, “Thing Called Love”; but this song is widely recognized due to Bonnie Raitt’s cover version, not the original. Slow Turning is livelier, funnier, and can sort of be classified as Americana, or alt-Country. All I know is I popped the CD into my car player this morning and found that my enthusiasm for the music has not waned.

I didn’t say we wouldn’t hurt anymore
That’s how you learn, you just get burned
But we don’t have to feel like dirt anymore
Though love’s not earned, Baby it’s our turn
We were always looking for true north
With our heads in the clouds, just a little off course
I left the motor running, now if you’re feeling down and out

Come on Baby drive south, with the one you love…. (etc.)

A great song to listen to in your car while driving on the highway, preferably one not filled with other vehicles and alongside the perfect girl. This is what it sounds like (acoustic, album is full band):

It occurs to me while listening to the song again that I might have a predisposition towards male singer-songwriters with strange voices (e.g. Tom Waits). However, perhaps John Hiatt’s voice is simply well worn as opposed to really odd. I have played his music for people who thought he might be an older black man from the South. Instead, he is a white guy from Indianapolis, Indiana.

Hiatt is a great songwriter, and his skill with lyrics are on full display in “Tennessee Plates”, a rollicking story of stealing a Cadillac from Elvis at Graceland. “We were looking for a Cadillac with Tennessee plates” is the continued refrain. Then at the end, he offers up a closing to the story that I find very clever:

For many years, I had one of those 90-minute cassette tapes that usually could fit an album on each side with Bring the Family on Side A, and Slow Turning on Side B. I played this tape in my car so much that I know the lyrics to both these albums pretty much by heart. I just listened to Bring the Family again, and I certainly do not want to denigrate it; it probably is Hiatt’s finest album with some really great songs. Since it has been so long between listens to either one of these albums, I found myself surprised anew with each song, how good it was and how I could sing along. I love the opening stanza of “Icy Blue Heart” (yes, from Slow Turning, I am trying to stay on message):

She came onto him like a slow movin’ cold front
His beer was warmer than the look in her eyes
She sat on a stool, he said, “What do you want?”
She said, “Give me a love that don’t freeze up inside.”

These lyrics give me goosebumps they’re so good. I can see why other artists are always clamoring to record the songs of John Hiatt. In closing, please listen to Slow Turning, and Bring the Family. That album deserves its own post. I like Crossing Muddy Waters a lot as well. Hiatt puts out a lot of music. If you get a chance to see him live, know that he is a real treat in concert.

—Stu Moore is a friend of the proprietor of this blog, and is just trying to do the best he can. What else can he do?

I know he's highly regarded, but I've always been somewhat put off by his voice, which is kind of unpleasant to me. Same as with Elvis Costello, who I know is a really good artist but don't much enjoy. It doesn't make sense because I definitely tend to like male singers with strange and not necessarily "good" voices. However, I've always admired John Hiatt for "Perfectly Good Guitar."

Funny, that's the same with me. I like his songs, but I've never warmed up to his voice for some reason. And I too like singers with "odd" voices.

Hiatt is a singer I've always heard good things about, but never actually heard. I've added the two albums you especially recommend to my Spotify playlist, so I'm going to give them a spin -- or, "spin".

I also think the album cover is very cool.

...another fun stanza from the album

There is one Hiatt song I've always liked a lot: "Cry Love." Don't know what album it's from.

Walk On, I think

I heard the Tennessee Plates song somewhere recently and really liked it. Can't even remember if it was Hiatt or someone else.

I'm wondering why I never heard of this guy (and why I am not familiar with those Kinks songs) and I'm not crazy about the music, but I loved your story about the first time you went to see Hiatt.

It's not surprising to me that you never heard those Kinks songs. I don't think any of them were big hits and the album wasn't all that popular, either.