I don’t understand why so many people seem to think the 1980s were a bad period for music. To my taste it’s as good as any other decade, possibly better than, for instance, the one that followed it. I never did understand all the fuss about grunge.

Ultravox’s Vienna was recorded in February of 1980 (according to Wikipedia), and released in July of that year. So it barely gets into the decade, but I think most fans would say it has an Eighties sort of sound. You could fairly call it synth-pop, but that term suggests, to me anyway, something a little superficial and night-clubby, maybe also somewhat detached and ironic. And that most definitely does not describe Ultravox. At least half of this album is pretty muscular and very passionate rock, and the rest, especially the title song, could just as well be called prog-rock, a term which implies, accurately, some serious musical prowess. These are definitely not musicians who are more adept at programming synths than playing normal instruments. Vocalist and guitarist Midge Ure is top-notch in both capacities, especially the first (Ultravox was not a guitar-based band).

The inhuman tones of the synths are an important part of the atmosphere, but it’s what they’re playing that really does the job. It’s part retro-sci-fi (there’s an instrumental called “Astradyne”), part 1940s black-and-white movies, part cold alienation, part mystery and part romance. The songs are almost all excellent, with lyrics that are mysterious and evocative but not incoherent. The vibe is suggested, at least to my sensibility, by the album cover. 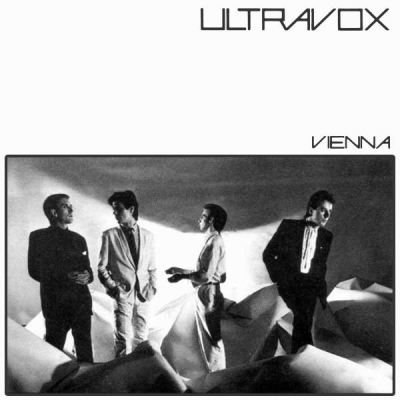 Here’s the title song, which is actually enhanced by the (official) video, which is to say the least not always the case:

Like I said, Midge Ure (the guy with the pencil-thin mustache in the video) is a seriously good singer.

I wanted to limit myself to two videos here, because if you’re not familiar with the album and like these you should at least go listen to the whole thing on Spotify or somewhere and put a fraction of a penny in the band’s pocket. Or better yet, buy the album. Picking two is very hard to do, because almost everything on the album is top-notch. I’ll go with this live performance of the opening track (on the North American release), “Sleepwalk.” It doesn’t sound much different from the studio version, and proves (a) they can play, not just manipulate studio gear; (b) they can rock.

Never mind labels (synth-pop, prog-rock): this is just a great album. A few (=ten!) years back, Stu provoked me into making a list of my top 25 pop albums, and Vienna was on it. (As you’ll see if you click on that link, I went significantly over 25, and also cheated on the concept of "album.").

I think of this as Ultravox’s first album, but it really wasn’t. A group by that name and with some of the same people had released an earlier album or two, but apparently when Midge Ure replaced the previous frontman it changed significantly. This was the first album with the new lineup: Ure, Warren Cann, Chris Cross, Billy Currie. (That’s not the Chris Cross who did “Sailing”.) That group went on to release three more albums that were as good as Vienna, possibly better, depending on your taste. I think Vienna remains my favorite, as none of the others have quite that mysterious atmosphere, but I like them all.

Okay, I can't resist posting one more. You really have to hear “Mr. X.” And somebody called "Are Sounds Electrik?" has done a brilliant job of matching it to clips from an old movie (or movies?).

How funny, revisiting your "top 25" of the time. I like the "and what about Al Stewart?" comment at the end.

I remember seeing these Ultravox records in record stores but I don't think I ever listened to any of their music. I'm at work now, but when on computer at home I'll give each track a listen, Mac.

You would have to add the new Bob Dylan "Triplicate" to any list made in the future! :D

And here's where I need the emoticon for shock and dismay. That's about all I can muster for the idea of Dylan singing Cole Porter etc.

Not sure if Ultravox is to your taste...in fact I'm going to guess not...but you should definitely give them a shot.

If I had started to do a new top 25 now without looking at that old one, it would probably still come out fairly similar.

Interestingly (or not) I read that none of the songs he has covered on these last three albums are Cole Porter.

I needed to correct you before Art did!

I'll try to make the time to figure out the composers and list them with percentages, for your edification.

In 1980 Midge Ure broke the hearts of 28% of the teen-age female population in England. While in the USA it was a much smaller 6.3%. Really astounding stuff I'm finding on Rod Dreher's website...

Yeah, he's really thorough and rigorous when it comes to statistics. And all while averaging 914.35 words per day of blogging, which puts him in the top 5% productivity bracket for bloggers. We need more people like him to keep the USA #1.

But I'm a little suspicious of that figure because I'm not sure whether it includes quotes from other people included in his posts.

Looking forward to listening to these. Ultravox was one of those bands that wasn't really on my radar back then, as I tended to like the guitar-driven stuff rather than the synth music. Plus I was at a Christian college that frowned on secular music, so I had to be somewhat careful with what I listened to in those days. I didn't really start following the non-Christian music scene closely until 1982.