52 Albums, Week 18: Spirituals and Songs From the Stoop (The Bay Ridge Band) 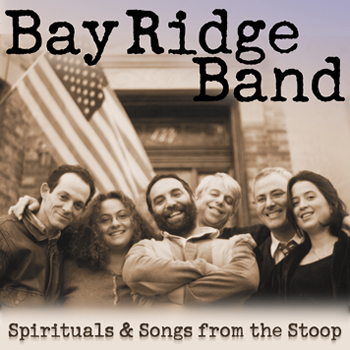 Way back in the late 1990s we were hanging out with a couple from Communione e Liberazione. Because of that I become interested in the works of Luigi Guissani, the founder of CL. After reading his books I decided to use The Religious Sense as part of a class I was teaching at Marquette called “20th Century Christian Responses to Modernity.” Soon after that Riro (Maurizio) Maniscalco, one of the big names in CL, came to Milwaukee to organize a symposium on the use of The Religious Sense in university teaching. I gave one of the presentations, as well as did a friend of mine, Rodney Howsare, who had also used the book in his class. The great theologian, Msgr. Lorenzo Albacete also presented—and David Schindler was there.

As it turns out Riro was also part of a folk group called The Bay Ridge Band, who had produced a CD called Spirituals and Songs from the Stoop. So I wound up with a copy of the CD (probably free, since I never buy anything).

The Bay Ridge Band is six men and women from at least three countries who sing folk, blues and gospel.

The voices of the two women are particularly sweet and strong. Sometimes the men’s voices are a little on the overkill trying to sound bluesy, but that is a minor critique. The arrangements are often compelling. The harmonies are rich, complex and varied. My family loves to sing them. In fact, we sang “Keep Your Lamps” at a talent show once—in four-part harmony.

What I like most about it is the joy. The album is fun in the same way that the Weaver’s Carnegie Hall Christmas Album is fun (I intend to review that later). A kind of freedom and joy even when they are being “serious”.

Most of the songs are traditional, but some are originals. One of my favorites is “A New Creation.” It is a wistful reflection on the American immigrant experience and the true longing of the heart.

Other favorites include “Bamboo,” “Sister Mary,” and “I Got Shoes,” which changes style several times, from folk to blues through classical and back again. Unfortunately, there aren’t a lot of cuts from the album on Youtube. The only other one is “The Things that I See,” which isn’t the strongest cut on the album.

David Schindler later invited me to an in-house CL discussion of Guissani’s book The Risk of Education. Several members of the Bay Ridge Band, including Riro and Chris Vath, were there so we had great sing-a-longs in the evenings.

The album and other Bay Ridge Band CDs can be sampled and bought here or at the usual outlets that I don’t promote online because why should I they don’t pay me anything.

Note: This isn’t them.

Very enjoyable music, Robert! But I may be more interested in the book you mention, The Religious Sense, than in pursuing more Bay Ridge Band music. The class you taught, 20th Century Responses to Modernity, also sounds fascinating.

Yeah, it was a great class, although, being a Ph.D. student at the time I aimed over the head of the undergraduates.
We read:
de Lubac
Walker Percy
C.S. Lewis
Luigi Guissani
and Gaudium et spes from Vatican II.
The Religious Sense is a great way to understand the religious impulse of the human person.

Just noticed that I failed to bullet-ize the list of performers when I transferred this to the blog. Not that it makes a huge difference.

I have to admit that I enjoyed the story here more than the music. Regarding Guissani, I haven't read much of him, just excerpts (mostly printed in Magnificat). But on that basis his writing seems somewhat obscure to me.

On the subject of music, last night I finally gave in and watched the latest Rock n Roll Hall of Fame induction ceremony that HBO has been playing continuously for the past few weeks.

I only watched the first three: Electric Light Orchestra, Joan Baez, and Yes. They were all terrific. Of the three I am a bigger fan of Yes than the others.

I was impressed how good Jon Anderson's voice was, and he looks great for a guy in his 70s. Steve Howe seems like an odd looking emaciated skeleton, but still plays guitar great.

Rick Wakeman was the biggest surprise - I'm guessing he weighs around 350 or so, and I don't know why but maybe because of the subject matter of his solo albums, I thought he was sort of an upper-crust Brit. Turns out he is cockney and blue collar, and for some unknown reason decided to tell a "I had my prostate examined today" joke. But he did so with perfect timing and I laughed loudly at the ending punchline. I should note that his girth does not affect his hands moving majestically on the piano keys.

Anderson, Wakeman, and Howe all spoke before the band performed. Trevor Rabin was also there playing, and Geddy Lee (from Rush) filled in for Chris Squire. It was fun.

After Yes was Tupac Shakur, so I went to bed and missed Pearl Jam later.

I saw Yes on tv some time back, probably ten years. I think it was in a hotel room and don't know what the program was. Anyway, Steve Howe did look almost scary. Somebody compared him to the Cryptkeeper.

It's actually never occurred to me to watch any of the Rock Hall of Fame shows. I just assumed they would be terrible, people doing lame medleys of their big hits and such.