[I didn't have a piece from anybody else for this week, and have been too busy to write one, so I'm falling back on this post from 2006. I've updated it slightly but it's pretty much as it was. I don't think I've listened to the album since--where did the last ten years go?--and I think maybe I wouldn't rate it quite so highly in comparison to others of its time. But I'm sure I would still consider it a great one.--mh] 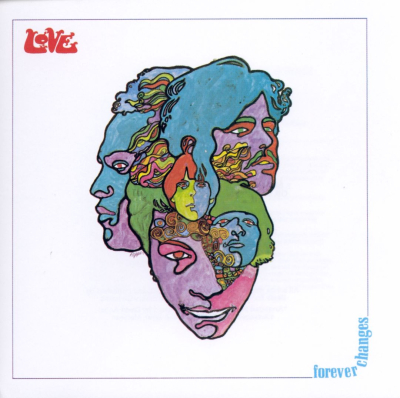 I had a friend in college who was very taken with the first two albums by this mid-‘60s Los Angeles band. When he heard Forever Changes (in early 1968, I'm guessing) he came over to my apartment with it and put it on without expressing any opinion, waiting for my reaction. When the trumpets really kicked in at the instrumental break of “Alone Again Or” he made a face. “Sounds like the Tijuana Brass,” he said with disgust. Since the rest of the album was in much the same vein, he hated it altogether. And I, although not sharing his disappointment because I didn’t share his expectations, did think it sounded pretty slick and sappy: not only brass, but strings, and not just as an accent here and there but as a key element of the sound. And the lead singer sounded a bit familiar, a bit like…Johnny Mathis? Could this be the same voice that sang “Little Red Book”? This wasn’t cool. It wasn’t rock-and-roll. Away with it.
In truth, though, I didn’t really think it was so bad. Yes, it was kind of—I’m not sure what word I would have used then, maybe “commercial”—but it was also kind of interesting, and undeniably melodic. If I remember correctly my disgusted friend left his copy with me. At any rate I acquired it, and listened to it now and then. It was a bit of a guilty pleasure but I had to admit to myself at least that I liked it, and then that I really liked it a good deal. I think I finally recognized how much I liked it one sunny but melancholy afternoon, listening to it alone in my apartment, and finding myself really moved by the last song, “You Set the Scene”:

As the business of life took most of my time and attention, I didn’t hear it for many years. Sometime in the late ‘80s I listened to it for the first time since perhaps 1970 or so. Yep, it was still good. And sometime after that I became aware that it was considered a classic, turning up frequently on lists of the all-time-best pop albums.

When Arthur Lee, the band’s driving force, died of leukemia in 2006, and eulogies and retrospectives popped up everywhere, I got out my old vinyl copy and listened to it again, just to see if it was really that good (having, once again, gone many years without hearing it). Yes, it is that good. I can’t think of anything else comparable in style from the last two years of the ‘60s that’s as good, and not much that even comes close. Nothing the Beatles did after their last few brilliant singles, the ones collected on Magical Mystery Tour, can touch it as a complete album. The Byrds? No. Simon and Garfunkel? No. Procol Harum’s A Salty Dog is in the same class but not as consistent and unified. This is one of the few pop albums that really seems to have a coherent and organic flow from beginning to end.

What is the style? I hesitate to describe it, for fear of making it sound bland and soft, but: richly melodic, with a sort of folk-rock base to which are added brilliant string and brass arrangements. Well, let’s not say “added,” because the arrangements are intrinsic and essential, and arranger David Angel ought, as with other great arranger/producers of the time like George Martin and Joe Boyd, to be credited as a group member.

The lyrics are a major strength. You can’t say they’re brilliant, exactly, and they’re often obscure, but somehow they capture the odd mixture of hope and alienation that characterized the late ‘60s.

Maybe it’s not so much that the album speaks to and of its time as to and of youth. I wondered, as I listened to it the other day, if it’s an artifact of its time, and if my liking for it is a result of having been young in that time. But I’ve asked around, and have found among its strongest admirers people who were born long after it was released. That constitutes a classic, at least in the shortened time frame of popular music.

At AMG you can read the sad story of the band, of Arthur Lee, and the not-quite-so-sad story of second guitarist-songwriter Bryan MacLean, who I suspect had a larger-than-recognized role in Forever Changes.

I'll have to give this a listen. There's a line in a Lloyd Cole song about "listening to Arthur Lee records" and I never knew who he was.

I recognize that line! Is it from "Ready to Be Heartbroken"?

I think on reflection I'll retreat a bit from what I say here about nothing from the last two years of the '60s being as good as Forever Changes. Jethro Tull's Stand Up might be as good.

Jethro Tull! I think I like Benefit more than Stand Up, but they are both great!!

Is it from "Ready to Be Heartbroken"?

I agree that Benefit is just as good in some sort of absolute sense. Stand Up has just always struck some kind of personal emotional chord with me that Benefit doesn't, but that's just my taste.

Finally was able to listen to these. A good bit too "60's" for me, really, but quite well done. Easily as good, if not better, than some of the more well-known stuff from that period. I can see why you like it.

That bass lick that begins "You Set the Scene" is pretty dated or rather lame. Bass didn't really get recorded very well at that time. Or maybe it was just the sound the bass players preferred--trebly enough to be heard on bad equipment, car radios and such.

By the way I've listened to the new Slowdive several times fairly attentively now, and it is really, really good.

Yes, it is. I've been going back and forth between it, Angel Olsen, and a band my 15 y.o. nephew recommended to me, Hibou, which is like shoegaze for teenyboppers. LOL

Can't remember if you like Beach House, but their new one is coming out next month and the first single, "Chariot," is quite good.

The new single from the forthcoming National album, which is scheduled for Sept., is also very good. "The System Dreams of Darkness" or something like that. Worth a listen.

I do like both those groups, but I think not as much as you do.