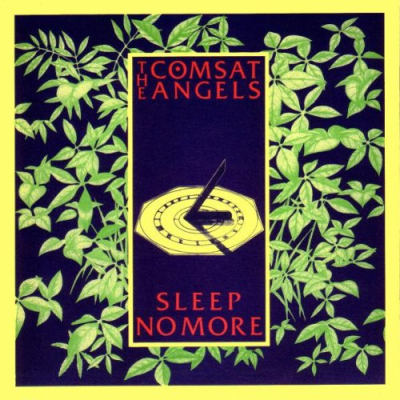 Back in the early 80’s when I first started paying attention to the post-punk/new wave scene, mostly via college radio, The Comsat Angels were a frequently mentioned band among others like Joy Division, U2, and The Teardrop Explodes. Although I heard of them often back then I can’t say I ever heard much of their music, if any at all, as my radio listening was fairly scattershot and at that time I was listening just as much, if not more, to “Christian rock.” I’m inclined to think, however, that if I would have heard the Comsat Angels back then I would have liked them.

My interest in them was kindled earlier this year when I watched the film Control, which tells the story of Joy Division lead singer Ian Curtis. Reacquainting myself with some of the music of that period, The Angels were one of the bands that came up a lot in various searches, and quickly became one I wanted to revisit.

Sleep No More, which was released in 1981, was their second LP, coming after the well-received debut Waiting For A Miracle. Good as it is, the first record has the feel of a band still trying to find itself. With Sleep No More everything has fallen into place. Somewhat darker than the first album, it also features instrumentation that’s more spare – guitar, bass, and drums, mostly, with keyboards playing a largely supportive roll. Still, it sounds remarkably full for a record from 1981: the guitars are loud, the bass is fat and prominent in the mix, the drums sound huge. I remember a long time ago reading a review where the writer said that an album, I forget what, “sounded like it was three feet thick.” That’s the way I’d describe this one.

The guitar work is jagged and angular, but still musical, a little like early U2 but more complex and fuller sounding. The songs, though not exactly catchy, are consistently engaging and interesting, the general feel being fairly bleak and angst-ridden (Cure fans take note!) And despite clocking in at only 38 minutes (many of the songs run less than four minutes) Sleep No More feels more substantial, probably due to this intensity of both musicality and tone.

When playing the album for the first time “Be Brave” was the track that really grabbed me on that initial listen:

The other song that I loved instantly is “Our Secret,” which closes the record. Despite the guitar line being the virtual apotheosis of “jagged and angular,” the song has a great hook, augmented by the most prominent use of keyboard on the entire record – the wonderfully inspired presence of a very “retro” sounding organ in the chorus. At 4:12, the song simply ends too soon!

I haven’t had the chance to listen to their subsequent records yet, although it seems they went in a more commercial direction in the mid-80’s, only returning to their early form on 1987’s Chasing Shadows. The 1982 follow up to Sleep No More, Fiction, is supposed to be a little lighter in tone but still quite good. I haven’t heard it yet, but I do tend to check out the rest of their material. In the meantime it sure was fun discovering this album, even if it was 36 years late

I like both these a lot. The "three feet thick" remark is very apt.

Yeah, I'm not familiar with any other early 80's recordings that are so sparse in their instrumentation yet so "fat" sounding.

For some reason "Be Brave" reminded me of Neil Young's "Oh Susanna."

I love this kind of obscure trivia.

Never heard the Neil Young song. Might have a chance to listen later.

For anyone who liked this album I'd recommend the Angels' 1987 record Chasing Shadows. The three albums they did between Sleep No More and Chasing Shadows were kind of weak in my opinion, but the latter reverts to Sleep's heavier darker style.

I was pretty in-tune with 'alternative' music in the late 80's so how I missed this one I don't know. Glad I found it now though.

I have to confess that I haven't listened to this one, even though I like the tracks you posted. Too much music...

I have about 20 episodes of Austin City Limits recorded and need to free some space on the dvr, so I'm trying to watch them. Yesterday it was Spoon and White Denim (half hour each). Not my cup of tea, either one, although they're very good musicians. But I find that I'm really put off by extravagant I'm-in-ecstasy-or-agony writhing and flailing on the part of rock musicians.

Don't think I've ever heard of either of those.

And yes, those sorts of histrionic performances annoy me too. I don't mind musos showing that they're "getting into it," but some of it is just silly.

What bothers me is that it seems false. Maybe it's not, but that's the way it comes across to me.

Here's a good example: this is one of my favorite new songs from the last few years, and in this video the singer comes close to, but doesn't cross the line for me. In this case I think the intensity is authentic and he really is caught up in the moment -- having been on stage in such circumstances myself I know the feeling. But it is very easy to veer over into a false type of showmanship, although I don't get the sense that that's what's going on here. Berninger just seems like an intense guy.

Oh yeah, that's well within the believable for me. I'm thinking of the much more exaggerated ones. I don't have any examples at hand but there were some moments in that ACL episode that provoked that reaction in me. Obviously I can't know what's actually contrived and what's not, but some of it strikes me that way.