Once again I'm in a hurry and obliged to recycle an old post, and a very minimal one. I had thought from the beginning of this series that I would include a Cocteau Twins album, and that it would probably be Treasure. But I don't have time to write a new post and I already had this one, such as it is. I think I actually like Treasure a little better. It's a little stranger and maybe a little darker. But Heaven or Las Vegas is very good, and if you like one you'd probably like the other. 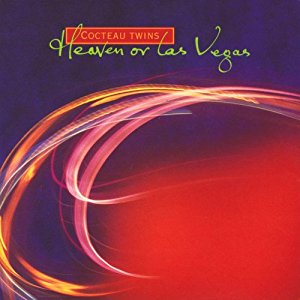 We all know about the alienation and inauthenticity of technological civilization, we all wonder if it’s sustainable, etc. But I couldn’t help feeling fortunate to live in this time and place a couple of weeks ago when I found myself driving east across the bay at twilight, with the full moon directly in front of me, listening to Heaven Or Las Vegas. If you know and like the otherworldly, sometimes ecstatic, sometimes wistful sound of the Cocteau Twins, you have an idea of what I mean. Someone once described Treasure, an album considered a masterpiece by most Twins lovers, as sounding like a roomful of angels. I don’t know how accurate that is but it serves well enough as an indicator of the sort of magic the group can work.

I only recently heard this album, having let it slip by for a long time, partly because of the mistaken idea that it came after the group moved from 4AD to Capitol and became more mainstream and, to my taste, less inspired. But it was in fact their last 4AD release, and if Heaven is at all inferior to Treasure, it’s by very little. I’d say at least half the songs here are as good as anything they ever did. And for someone who likes them that’s very, very good. There are a couple of songs where Elisabeth Fraser’s cascading melodies (I’ve always assumed she writes them, as they seem so inseparable from her voice) attain the uncanny ability to make you feel as if your spirit is literally being lifted.

The very best Twins album might be one combining the best tracks from their many EPs. "Aikea-Guinea", for instance.

I will try to write something for next week, Mac. I've never heard the Cocteau Twins, just marginally aware of their existence. Will listen to the videos today when I have a chance.

I'm not at all sure it's your cup of tea but will be interested in hearing your reaction. Btw I think this was originally written in 2007. Also btw the Cocteau Twins can be generally considered an '80s group--that's when they did most of their best work. Not sure exactly when this one came out. Not later than early '90s.

In a way it reminds me of last week's group, I think I would need to spend time with the entire album to really be able to take in their music. Hard to make an opinion based on just a few songs. Not unpleasant at all though.

I was at first shocked by that comparison. Then just mildly surprised. Doesn't seem to me to be much similarity except female vocals.

The C.T. are one of my favorite all-time bands, and probably the favorite when total body of work is considered, in that I like practically everything they've done almost equally.

I'm inclined to think that Liz Fraser is one of rock's best all-around female vocalists ever, based on the fact that in her prime she was able to do all styles of singing at a notably high level of quality. She could rock, she could be jazzy/soulful, she could be soft and gentle, and even operatic, all with equal aplomb.

"one of rock's best all-around female vocalists ever, " I wouldn't argue with that. Lack of lyrics would keep me from naming them as favorites, but they are something special.

There's one Twins album I've never even heard: Blue Bell Knoll. I'm looking forward to getting acquainted with it, even if it's not as good as some others.

I'm looking forward to it.

It's the rare singer that can do both this:

And here is a stunning one from the early 80's where she does both in the same song.

She's something else all right. As much as I've listened to some of their stuff, I'd never seen her. She has a charming visual presence as well. And I'd sometimes wondered how they did their stuff live, since there's so much multi-tracking involved. I just compared that live Pandora to the album version. Very interesting. It still works even with only one vocal line, though the studio version is more magical.

Yes, in the studio version of 'Seekers Who Are Lovers' you've got two vocal lines as well -- the one in the video I posted, and another one that's very high and ethereal.

I remember reading once that C.T. had an unorthodox way of composing their songs, in that they actually wrote and arranged them during the recording process, as opposed to coming into the studio with a group of finished, or nearly finished, songs in mind.

That's very believable. I do wonder who specifically is responsible for some of those melodies.

The studio version of "Pandora" is the same. You remind me btw that Milk and Kisses is another of their albums that I don't know very well.