52 Albums, Week 33: The Harrow and The Harvest (Gillian Welch) 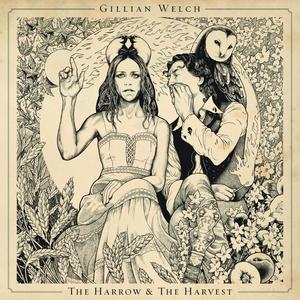 I liked Gillian Welch's Time the Revelator a lot (you can read my 2008 review of it here), though there were a couple of songs on it that I wasn’t very enthusiastic about—not that I disliked them, but I found them somewhat less interesting than the rest. On that score, The Harrow and The Harvest is better. In fact it comes pretty close to being perfect, in that every song is extremely fine and extremely well performed. To my taste, the only one that seems to lower the standard a bit is the lively banjo-based “Six White Horses.” But as it’s the only song on the album which could be described as anywhere near bright in sound, it provides a little needed contrast to the dark colors of the others. And of course the lyrics are not exactly cheerful, "six white horses" being a traditional motif signifying a funeral.

Time the Revelator is ten years older that Harrow, and yet the latter sounds as if it might have been recorded the following year: similar songs performed in similar ways. I can imagine a critic complaining that there has been too little development, that the duo of Welch and her collaborator David Rawlings are not progressing, not discovering new things. That would be misleading on two counts. First, there is an album between the two, Soul Journey, which I have not heard, but which is said to be rather different in mood and style: more upbeat, and having more elaborate instrumentation, including drums. Second, and more importantly, though they may be doing the same sort of thing here, they’re doing it better. Yes, it’s a relatively small and subtle improvement, but it’s an improvement: not that every song here is better than every song on Time, but they’re even more consistently rich, and I think the new album is more unified. I’m used to musicians who do brilliant things early in their careers, and continue in the same vein but with less inspiration and conviction. Those few who continue to be brilliant usually change substantially, exhausting one style and moving on to something else: Tom Waits is the best example. It’s unusual to find a high level of achievement continued in a similar way at an equally high or higher level.

I supposed, on first exposure to Welch’s country-based voice and songs, that she had grown up in the south and that its musical culture had been part of her life, and was pretty surprised to learn that she was born in New York and grew up in Los Angeles, in the midst of the entertainment industry. Well, I thought, that just goes to show you how strong the music is, and how gifted she is, to have absorbed that whole way of expression. But I learned just now that there’s more to the story. Yes, according to the Wikipedia biography, she was born in New York City (on my birthday, which pleases me absurdly), and when she was three her parents moved to Los Angeles and became writers for The Carol Burnett Show. But she was adopted, and there is some reason to think that her biological mother may have been from North Carolina—which provides a starting place for an interesting train of thought about heredity.

This music is commonly referred to nowadays as Americana or American roots music: folk-based, but not directly imitative, comprised mostly of original songs with an obvious debt to either the country or blues traditions or both. In Welch’s case, it’s sometimes hard to tell what’s traditional and what’s original. Some songs that make extensive use of folk terms and phrases are obviously original, too sophisticated (lyrically or musically or both), to be folk songs. But I am really not sure about a few of them—the above-mentioned “Six White Horses,” or “Red Clay Halo” on Time, for instance. The latter doesn’t sound really sound like a folk song, but it could be an old Nashville tune from the ‘40s or ‘50s. In other words, the blending of traditional and original elements is pretty nearly seamless, which is high praise.

People would flat-out ask me, 'Don't you have any happy love songs?' Well, as a matter of fact, I don't. I've got songs about orphans and morphine addicts.

--Welch, quoted in the Wikipedia article, from a New York Times interview

The album is also pretty dark, in a way that is certainly supported by the tradition but is also undoubtedly Welch’s own predilection. The speaker in her first-person lyrics is sometimes clearly someone else, but “Dark Turn of Mind” seems to be about herself:

But though almost everything here is dark, melancholy, and more resigned than hopeful, it isn’t hopeless. There’s a light out there somewhere. The girl with the dark turn of mind is happy at night. And in “Hard Times,” though the “Camptown man” who sang “Hard times ain’t gonna rule my mind” as he plowed his fields seems defeated at the end of the song, the story isn’t over:

But the Camptown man he doesn’t plow no more
I seen him walking down to the cigarette store
Guess he lost that knack and he forgot that song
Woke up one morning and the mule was gone
So come all you ragtime kings
And come on you dogs (dolls?) and sing
Pick up your dusty old horn and give it a blow
Playing “hard times ain’t gonna rule my mind”

It’s clear that Welch and Rawlings are pretty much equals in this collaboration: certainly in performance, and by their account, and by the crediting of the songs to both, in writing as well. So I don’t know why the duo is persistently known only by the name of one of them. She recognizes the inaccuracy: in an interview I read some time ago she said that "'Gillian Welch' is the name of a two-person band." So perhaps at this point it’s just for consistent branding.

At any rate, Rawlings’s contribution has to be recognized. He is an extremely fine guitarist. He doesn’t sound anything like Richard Thompson, but like Thompson he applies a very far-ranging vocabulary and a lot of invention to fairly straightforward folk-based chord progressions, and the result has a lot to do with the fact that although most of the material here is similar not only in basic sound but in tempo and mood, I don’t get bored with it. And I really should: an album of consistently slow, somewhat lengthy songs, all very similar in musical texture, sounds on the face of it like something that I wouldn’t be able to sit through all at once. But within those limits there’s a lot of invention: beautiful melody lines, consistently rich and skillful lyrics, and of course Rawlings’s guitar.

As excellent as Rawlings’s playing is, I’ve always wished his tone were bigger and fuller. It’s very tight and trebly, really sort of flat, and I sometimes wish I were hearing the same notes played in a tone like, for instance, that heard on the old Ian and Sylvia albums. I have to admit, though, that the very bright tone fits well with Welch’s broad, soft strumming. She uses the sort of guitar I wish he did: a big Gibson. His, I just learned, is in fact a rather odd instrument, a 1935 Epiphone archtop, a smaller-than-average guitar and apparently not a particularly high-quality one in its day. Well, it’s certainly distinctive. It sounds almost like a resonator guitar.

I haven't said anything about Welch's singing, thinking somehow that it goes without saying that she is really, really good. But then I'm not assuming that everyone who reads this has heard her, so I should say it. She has a low, rich voice, not the sharp sort of sound one associates with country singers: more like a torch singer than, say, a Dolly Parton. And it suits the material perfectly. The fact that she has recorded with Emmylou Harris and Allison Kraus should tell you how she's regarded by her fellow artists.

By the way, in case you were wondering, it’s “Gillian” as in “gill”, as in how fish breath, not “jill.” as in jack-and. I’m not sure which is standard. I thought I remembered Gillian Anderson’s name (The X-Files) being pronounced as “jillian.”

Does Rawlings use nylon strings on his guitar? That would make a difference in the sound too. I've seen them live a couple times, but it's been years, and I can't remember. I know that he does bend notes a lot, especially in his solos.

Acony Bell is one of my favorites of hers. Most extraordinary little piece...gotten me through some dark nights.

Well now they have the Dave Rawlings Machine, so they each have their own band, but they're in both of them.

This might be my favorite album. I love all the songs, and I love the guitar. Don't think I usually notice the guitar very much, but here, I do. I love to sing along, and this one is perfect for me because her range is pretty close to mine.

They are really great, and this is a great album.

I would put it up there with almost anything by anybody in the past 50 years or so. Certainly as good as anything that, for instance, Joni Mitchell has done. Not as complex maybe but that's not the only thing.

I'm fairly certain that's a steel-string guitar. I think of his bending is more of a vibrato, sort of a twist. At any rate I don't remember hearing those full half-step and more bends that blues and rock players do.

I remember liking Acony Bell but haven't heard it for a long time.

Poor Joni Mitchell, she gets slapped down by Mac! Though she has gotten quite grumpy in her dotage.

That wasn't intended as a slap! It's praising GW for coming up to Joni Mitchell's level, not criticizing Joni, whom I consider a major artist. Although she does seem to have sort of a big ego so she might take it that way.

Rawlings has a technique in which when he hits a bad note he immediately bends it to where it's not bad anymore. It's more prominent when he's playing live. And they tend to be fast bends, not the slower ones you hear in a lot of rock and blues.

When I first heard him live I thought this was intentional, but the more I listened I came to the conclusion that he was basically auto-correcting on the fly.

Gosh, that would be awfully hard to do.

Iirc, there's a live version of "Time..." on Youtube where it's more noticeable.

I'll have an album piece for you tonight if you need one for Thursday, btw.

I'll be more than happy to have it. I've started one so I wouldn't end up copying and pasting an old one on Wednesday night, but it's barely begun.