52 Albums, Week 38: A Deeper Understanding (The War On Drugs) 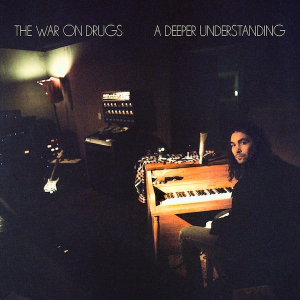 I think this will be the first piece in this series to look at a current album (this one came out three weeks ago) but this is a good enough record to warrant the attention. I also thought about doing either Slowdive’s recent self-titled comeback album or Ride’s Weather Diaries, both of which are also current and also very good, but this one’s the most recent, and it’s been spending a lot of time in my player, which makes it easy to write about.

I first heard of Philly band The War on Drugs in 2015 after the release of their widely acclaimed album Lost in the Dream. Upon my first listening I wasn’t quite sure what to make of it all, but I liked it a lot and listened to it fairly incessantly. The new album continues in a similar vein to the last one, and except for one small misstep is very close to its equal. Imagine a mash-up of Dylan, Tom Petty, and Springsteen, with some 80’s influence as spice, and you’ll have some approximation of what W.O.D. sounds like. That, and layers. Lots of layers. (Some of the songs on here have as many as a dozen instruments being played at once, often in overdubs.)

One of the things I love about this band is that it seems that lead man/songwriter Adam Granduciel takes a strong devil-may-care attitude when it comes to arranging and recording. You want six guitars and a glockenspiel included in a song? Got it. You want the album’s initial “single” to be an eleven-minute slowburn folk-rocker with an intermission in the middle? You got it. You want a stinging feedback-laden electric guitar solo to show up in a slow acoustic ballad? You got it. Unexpected harmonicas show up out of nowhere, odd snatches of 80s-sounding synthesizers appear in places where they shouldn’t, and on several songs it’s hard to tell if the drumming is real or electronic (or both). Believe it or not it all works wonderfully.

Granduciel’s voice does sound a lot like Dylan’s, and the songs are often constructed in a basically Dylan-esque manner, but the resemblance probably stops there. Ditto Petty and Springsteen – at their best they’re both better songwriters than Granduciel, but Petty’s never been nearly as musically creative, and The Boss only came close in his early days. Some of this risk-taking creativity may be due to the fact that Granduciel is in his late 30’s, and thus has had a fair amount of time to hear and process what’s come before him, unlike some of the younger artists currently taking a stab at being “retro.” As one reviewer put it, The War on Drugs is simultaneously one of the newest sounding and most retro things you’ve probably ever heard.

The other thing I like is the way that the songs take their time in developing. Most of the tracks on A Deeper Understanding are five minutes or longer, and even the ones that seemingly start off rather plain usually take interesting turns. Which brings me to the one minor negative about the record. I’m not sure why it was decided to end the album with two long slow songs back-to-back, especially when one is much more interesting than the other. It serves to reduce the magic of one of the album’s best tracks, the majestic “In Chains,” by following it with the okay-but-not-brilliant “Clean Living.” I think the feel would have been better maintained in going straight to the album’s excellent closer, “You Don’t Have to Go,” a slow song with some real power. But this is a small complaint when gauged against the album’s strengths.

I’ve included videos for two songs, one slower, one more up-tempo, and can say that if you like these two you’ll like the rest. Best way to listen to these is loud and/or with headphones. Cheap computer speakers will not do them justice.

I like both of these. I heard them on Austin City Limits a while back and liked what I heard but haven't followed up. Nice video on that first one.

There's a really nice video for the song "Holding On" too. I almost included it, but I like "Nothing to Find" slightly better as a song.

"You want a stinging feedback-laden electric guitar solo to show up in a slow acoustic ballad?"

That happens to be a combination I've always loved.

Those are pretty nice songs, Rob. Never heard of these people but may need to check them out more.

"You want a stinging feedback-laden electric guitar solo to show up in a slow acoustic ballad?"

Don't think I mentioned it here, but this record won the Grammy for Best Rock Album this year.

Yeah, even a stopped clock, etc.