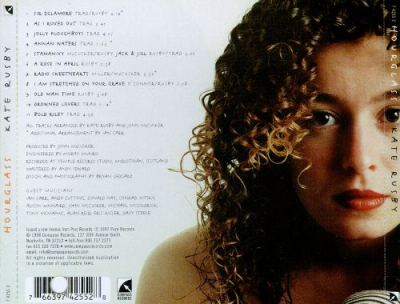 In 1997, the year my first child was born, Kate Rusby, the Barnsley Nightingale, brought out her debut album, Hourglass. At the time I was working on my doctorate, and sharing a flat with an old school friend, also a doctoral student, who spent money on music. I had not yet then myself got out of the habit of spending money only on books. The combination of a colicky child who was quiet only when held, and my friend’s purchase of the newly minted CD of Hourglass, meant that I spent many, many hours rhythmically ambling around the flat with a baby in my arms, to the sound of Kate Rusby’s voice (Eliza Carthy sometimes providing variety).

The album’s centre of gravity is traditional. About half the songs are anonymous folksongs, and those that aren’t are stylistically similar. The performance is acoustic. None of Steeleye Span’s or Fairport Convention’s electric folk here. The opening track, “Sir Eglamore”, is a light version of a combat between dragon and knight (in the spirit of the St George of winter entertainments), with the knight of the title unable to pierce the dragon’s hide with his sword, and finally jabbing for its open mouth, only for the dragon to run off home with the sword stuck between its jaws. It is related to the American “Old Bangum”, in which a hunter fights a wild hog.

As I Roved Out” (Roud 3479) is perhaps more familiar from Planxty's version of the 1970s . “The Jolly Ploughboys” was entirely unfamiliar to me:

When six o' clock comes, me boys, at breakfast we'll meet,
And cold beef and pork we'll heartily eat.
With a piece in our pockets, to the fields we do go
For we're all jolly fellows that follows the plough.

And so on through the day. Two of the songs, both about drownings, were sung by Nic Jones in the 1970s: “Annan Water” (a Child Ballad) and “The Drowned Lovers”, my absolute favourite from the album, and the one the baby most often slept to. It is not only a tragic story of thwarted young love, but also a dramatic piece in different voices, as much direct speech as narrative reporting.

A little under half of the songs are original or new compositions — “A Rose in April”, “Radio Sweethearts”, “Old Man Time”, and a couple more. These are very much in the same style but somehow, to my taste, do not match up to the traditional material. A piece that falls somewhere between the two is another of my favourites, “I Am Stretched on Your Grave” (recorded by Sinead O’Connor a few years before, but in nothing like so effectively creepy a rendition), a modern translation of an old, and anonymous, Irish poem.

Good piece, Paul. Although I haven't listened to this album lately, I remember playing it a lot back when it came out.

"Annan Waters" is my favourite of Kate Rusby's songs; she sings it so beautifully.

I should go back and listen to this whole record again; I'd forgotten about "The Drowned Lovers". Anais Mitchell did a wonderful version of this song that I actually prefer to Kate's: here.

I also love Kate Rusby's Christmas records, of which there are a few. They are a nice mix of unusual and familiar, and they sound joyful.

She's in the heard-of-but-not-heard group for me. Still haven't heard her. I'm so busy that I didn't even have time to listen to the songs in this post. Maybe tonight.

I didn't know Anais Mitchell. She's not bad, but that's not a patch on our Kate.

Her best is on a different album, though: https://www.youtube.com/watch?v=Y3B2mntKAZo

Wow, that's beautiful. I've loved that song since I heard it on Joan Baez's Farewell Angelina (though I was never a huge admirer of her voice).

A totally different approach to the song, from Van Morrison. This used to be the only song I really liked from his disappointing Hard Nose the Highway album, and I think I like it even better now.

I love Van Morrison's way with that song too, and I like this live version, also from 1973, even more:

Yeah, I might agree. I was expecting not to like it as much as the album version but it's certainly at least as good. Beautiful.

No real connection but speaking of Van, a friend sent me this a couple weeks ago.

I read that "Vanlose Stairway" is the song Van has performed more often in concert than any other. This surprised me.

Good heavens. I had no idea he could yodel.

As far as I can remember I've never heard this song before.

I don't remember exactly which but it's from either Into the Music or Beautiful Vision.

I was careful to say "as far as I can remember" because I know I've heard at least three or four of his albums just once or twice without their leaving much of an impression. Pretty sure it's not Into the Music because I have that one, and like most of it.

"I know I've heard at least three or four of his albums just once or twice without their leaving much of an impression."

Yeah, same with me. Plus some of those late 70's/early 80's albums kind of run together in my head. I know Inarticulate Speech of the Heart really well, as that's the first Van record I ever bought, but the other ones not so much.

It is on Beautiful Vision. I see it came out right after Common One. I definitely heard it once or twice, but as I was saying earlier, not much of an impression.