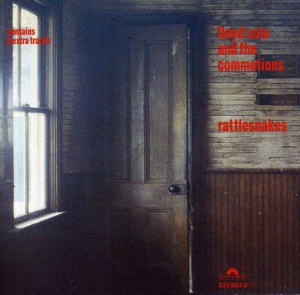 By the time this record came out in 1984 synth-driven pop had begun to dominate the music scene, and while there was a fair amount of guitar-oriented stuff circling under the mainstream radar, generally speaking you didn’t get to hear much of it unless you actively looked for it. I can’t remember exactly what prompted me to check this album out – I’m sure I had read a review somewhere – but I’m glad I did, because it became a favorite of mine, and Lloyd Cole grew to be a very dependable go-to artist for me.

Although I was a little put off at first by the album’s comparative polish (at that time rough edges tended to be generally viewed as a plus) I liked it all, finding it enjoyable both musically and lyrically. I was 23 when I bought the record (the same age as Cole was when he made it, actually) and I wasn’t quite sure how much of Cole’s lyrical shtick was tongue-in-cheek and how much was really autobiographical. That kind of thing matters far less to me now, but as it turns out Cole has said that it was both.

He can be a bit pretentious, but it’s mostly a fun sort of pretention. In the Wikipedia piece on the album he says, “I was a young man! I really was. You can just imagine me trying to wear a French trench coat at the time, thinking I looked very cool when, in fact, I looked really stupid. But maybe that's why people liked it."

Although Cole is English, the band was formed in Glasgow while he was at university there, so sometimes you’ll hear that the band was “Scottish,” which isn’t entirely untrue. When the album was released in the UK the opening track, “Perfect Skin,” became the album’s biggest single but both the title song and “Forest Fire” also got considerable airplay, and the album actually made it into the Top 20, peaking at no. 13.

The title track is quite representative of the album as a whole, while “Forest Fire” is one of my all-time favorite songs. I’ve also included “Four Flights Up,” a fun number that contains some good samples of Cole’s memorable lyricism, including the memorable line, “Must you tell me all your secrets when it’s hard enough to love you knowing nothing?”

Also worthy of mention are the soft and haunting “Down on Mission Street” and the album’s wistful closer, “Are You Ready to Be Heartbroken?”

Cole and his band did two more records, Easy Pieces and Mainstream, and while both are enjoyable and have their great moments, neither is as good overall as Rattlesnakes. The band then broke up and Cole moved to New York City, where he continued as a solo performer, producing four more albums, the best of which is 1991’s Don’t Get Weird on Me, Babe, arguably his best record after Rattlesnakes. In all he did seven albums between 1984 and 1995, all of them worth hearing except for 1993’s Bad Vibes, an ill-advised foray into a darker, harder-edged sound. I haven’t been much taken with his more recent acoustic material, but those records from his earlier period have been constant companions of mine over the years. Rattlesnakes has remained my favorite of those, and one of my favorite records period.

Who wrote this review, Mac?

Oops, forgot the credit. Thanks. It's fixed now.

Someone sent me several songs from this album on a mixtape back in the '80s. I liked them but not enough to seek out more. Not sure if these three were among them but I know "Charlotte Street" and "Heartbroken" were. I've been busy today and haven't had a chance to listen to these yet.

I'm sure Rob knows this, but others may not: Camera Obscura has a song amusingly called "Lloyd, I'm Ready To Be Heartbroken."

I finally had a chance to just sit and listen to these three songs. I like them, especially the first. And yet--just as I liked the stuff I'd heard years ago from the same album (none of these three), I'm somehow unenthused, though there is nothing I don't like.

A fondness for Cole may have a "had to be there" aspect to it. Lots of stuff since 1984 sounds in one way or another like what he was doing, but at the time he was fairly unique.

I didn't remember his voice having that '80s New Wave croon quality (if you know what I mean--hard to describe). According to AllMusic he's since ventured into ambient electronica. That sounds interesting.

I've not heard any of the electronica -- I think that's been mainly a side project. He seems to be doing a fair amount of duo work with his son, who's also a guitarist.

By the way, I'm going to pencil myself in for two more pieces for the year, one for next month and one for December. I'm going to do Takk (Sigur Ros) and the Peteris Vasks violin concerto (not sure yet which recording).

Ok, great. I've had Takk for a long time and only recently got around to listening to it. At first listen I really liked it.

I also have the Vasks concerto and have only heard it once. And yet I continue to buy music. It's an illness.

I think I'm the way with books that you are with music. I own more books than I'll ever be able to read in my lifetime. Yet I buy more.

Some of this is ameliorated by the fact that I sell and give away many, but still the net quantity increases.

Sad to say, I'm just as bad with books. I can justify most of them more readily, as having an Educational Value that it would be difficult to claim for most of the music I buy.