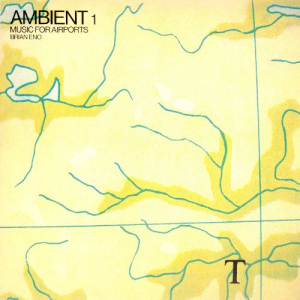 I'd been thinking since this series began that I would include at least one ambient album, just in the interests of making the scope very broad.  I had in mind a few favorites as possibilities, and I finally started thinking about my choice a few weeks ago when Rob G gave us a techno album. (The association is that both techno and ambient tend to be all or mostly electronic.)

But in listening to those favorites I found at least one or two tracks that I didn't much like, that spoiled or disrupted the atmosphere. And since ambient music is at least 80% atmosphere, that's a pretty big flaw. There was, for instance, Steve Roach and Roger King's Dust to Dust, which conjures a western desert feeling, more accurately described as a western desert movie feeling. I like it, but it has a couple of rhythmic tracks that to me don't really fit. Here's a sample track, "Rain and Creosote," which also has a nice video. And Ishq's Orchid, which I have described as an auditory tropical vacation, and have sometimes called my favorite ambient album; it, too, has its infelicities. A sample: "Bhakti." (Both these use "environmental" sounds--real-world, non-musical sounds, like rain and birdsongs, also a common feature of ambient music). Some others I thought were just very unlikely to appeal to anyone who reads this blog--too weird and dark (there is a whole sub-genre called "dark ambient," to which I'm somewhat partial)

So in the end I decided that, as the song says, the original is still the greatest. Music for Airports, as people generally refer to it, was released in 1978, and has the distinction of being the first ambient album to be described explicitly as such. You can read Eno's account of what he was trying to do with the "ambient" concept in the liner notes for the album. I hadn't heard it for some time, and when I got out the CD and listened to it I thought it was if anything better than I remembered.

I think most of the sounds on it are "real," i.e. not produced electronically. Certainly the piano is, and I think the voices are, too. But the album is constructed with looped segments--tape loops, I assume, this being 1978. Also, this being 1978, the concept of "sides" was important. There are four tracks, two to each side of the LP. They're not named, but numbered by side and track.

I'm pressed for time, so that's enough talk. If you want more discussion, the album's Wikipedia page has some. Here's 1/1. Or should that be "1/1"?

I'm going to have to listen (or half listen) to Ambient 1 again. It never really grabbed me (which I guess is sort of the point). I always preferred Ambient 2 (and 4).

I'm not sure I've heard 2, but I'm the opposite regarding 4: I don't like it as much as 1. Or do I have 2 and 4 reversed? Anyway, I think 1 is really pretty much perfect ambient.

Ambient 2 was a collaboration with Harold Budd and is mostly piano-based. 4 is darker - a lot of loud electronic humming with other sounds played over it. It has been years since I listened to 4, but that's my recollection.

I listened to the track you posted last might and it was mich better than I had remembered. I was surprised to find that I have the album in my iTunes library - I thought I only had it on vinyl.

I have always felt that ambient music is delicate and could be spoiled by listening to it in the wrong atmosphere, so I have rarely listened to it. I'm changing my thinking anout that as I sit on a train to New York City listening tontue rest of Ambient 1.

Ok, 4 is the one I've heard. Definitely darker. Listening to 1 on a train could be an interesting experience, sort of cinematic.

It actually was sort of cinematic. I didn't use that word, but I did think "this is sort of like a movie." It's probably not something I would have thought if I regularly rode the train. But a trip to NYC is unusual (I went to a presentation on developing for Microsoft Azure cloud services - talk about fun!), so having an ambient soundtrack for the ride was good.

Yeah, that presentation sounds like all kinds of fun.

I find that I don't much like listening to music--having that cinematic experience-- when I'm out walking. I need to be more aware of my surroundings. But in a car driving down the interstate is nice, and I would think a train ride might be even better.

I've got only one Eno album and it's Discreet Music. Haven't listened to it in ages but I'll have to dig it out. Won't have time to listen to these clips until tomorrow.

By the way, Mac, I know you like some of Hammock's music. Their album Oblivion Hymns from a couple years back is all slow and ambient. It's quite nice.

I'm pretty sure I've heard Discreet but can't remember what it's like or how much I liked it.

I've been listening to Hammock's Everything and Nothing and *really* liking it.

I listened to Discreet over the weekend and didn't like it all that much. It's that type of ambient music that's like wallpaper -- nice in the background but not all that interesting otherwise. I tend to like the sort of thing that has a little more musical substance to it.

Everything and Nothing is a very good album. I was thinking that you could take Hammock's albums and make two very good but very different 'mix tapes' -- one featuring their more hefty, uptempo material and the other their slower, ambient stuff.

I confess I've been hearing Everything and Nothing "ambiently"--playing it in the background while working. But it keeps grabbing me.

Discreet Music, I see from Allmusic, actually preceded Ambient 1. I'm pretty sure I haven't heard it.

I don't remember the music from Discrete Music at all. But I think in the liner notes he said that he was aiming for music that could be ignored, and he suggested playing it at a level that occasionally fell below audibility.

I vaguely remember that, Don, and it sounds right. D.M. is very quiet and very repetitive -- 'extremely' ambient, like wind chimes almost.

One of the things that make Music for Airports so appealing to me is that it has pleasant tunes, but slow and repeated with space between them, so they don't get on your nerves. Or at least not on mine. Steve Roach, whom I mention in the post, has produced albums which are so static that you could drop the needle (so to speak) anywhere and not know the difference between one spot and another. That's way too far in that direction.

There's kind of a paradox in some ambient music in that I end up wanting to turn it up fairly loud and pay closer attention because it has all sorts of interesting little nuances.