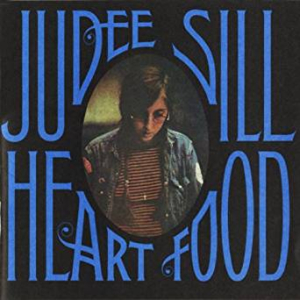 This is a classic, another of the albums that I figured I would work into this series. I had thought I would just write a couple of paragraphs and see what I could find on YouTube to show the best of the album. And then I thought Wait, didn't you write something about Judee Sill on the blog a long time ago? and went looking for it. Indeed I did, back in October of 2004, the blog's first year, almost exactly thirteen years ago. It was more extensive than I remembered. So I listened to the album for the first time in at least eight or ten years, to see if my opinion had changed, and it hasn't. If anything I may think more highly of it now.

Back in the early ‘70s I worked in a couple of record stores and I heard a lot of music to the point of satiety and well beyond. Sometimes music that I liked mildly, such as the Eagles’ Desperado, was run into the ground, and music that I didn’t much like, such as Elton John’s Goodbye Yellow Brick Road, became hated. Records that weren’t very popular didn’t get played very much, which was fine with me whether I liked them or not: if I didn’t like them, it was nice not to have to hear them, and if I did like them, they didn’t get ruined by over-listening. One of these less-popular works was Judee Sill’s Heart Food. I remember feeling that there was something a bit haunting about it, something that was kind of getting under my skin, but for reasons I can’t now remember I never bought it and soon forgot about it when it stopped being played in the store.

More than ten years later something brought it to mind again. I can’t remember now what sparked the memory, but I do remember that a couple of lyrics came to mind: something about a road to Kingdom Come, and something that included the Kyrie. And I had a vague sense of Out West—deserts, cowboys, horses, tumbleweeds—as well as the notion of some kind of Christian-sounding spirituality. So I asked my old friend Robert Woodley, who for a long time seemed to know every pop album ever produced, and to own most of them, about it. He knew right away what I was talking about and, the record being out of print, made me a tape with Judee Sill on one side and the best of Ultravox on the other. Now there was a contrast: mystical Christian cowboy folk-pop paired with alienated world-weary synth-pop. I listened to both sides a lot, and the tape is much the worse for wear. I eventually bought most of Ultravox’s work, but Judee Sill’s remained unavailable.

In the mid-‘90s as more and more music resources became available on the web—retailers, fans, reviews—I made it a point to go looking every now and then for Heart Food. At a time when it seemed that almost everything that had ever been available on LP was appearing on CD, Heart Food remained absent. At one point I almost paid $50 for a copy of the LP on Ebay, but was held back by imagining the scene in which I attempted to justify to my wife paying that much money for a used LP.

This past summer Dawn Eden happened to mention it on her blog, The Dawn Patrol [2017 Note: there was a link here but it no longer works], which reminded me that it had been a while since I looked for it. Happily, it was now available, albeit at $26. I emailed Dawn complimenting her on her taste and complaining about the high price. She advised me to buy it anyway, quickly because it was a limited edition, adding that I shouldn’t balk at the price because I would get $260 worth of enjoyment out of it. [2017 Note: I believe it was after this time that Dawn Eden entered the Catholic Church; she is now a writer and theology professor, using her full name, Dawn Eden Goldstein. She still posts updates on her life and work at The Dawn Patrol.]

Still put off by the high price, I didn’t buy the CD right away, but put it on my birthday wish list. My wife having granted the wish last week, I can now say that Dawn’s advice was right on. It has probably been ten years or more since I listened to my old tape copy, and hearing it now in CD-quality audio is almost like hearing it for the first time. The sound is far richer and warmer and more detailed, and the music itself seems better than ever.

It’s always difficult to describe music, and this more so than some, because it produces an effect which is somewhat at odds with its raw materials. That is, if I say that in addition to Sill’s voice and guitar the first song (“There's a Rugged Road,” the “kingdom come” song I remembered from 1973) includes steel guitar and fiddle and in general sounds somewhat country-western, it will be accurate as to the sound but not as to the atmosphere, which is mystical. Country music is pretty down to earth and straightforward, as is the folk-country music of people like Kate Wolf and Nanci Griffith. But there is an indefinable air of mystery about this song. Those images that I mentioned earlier—deserts, cowboys, and the like—are there, but as archetypes and symbols, not as their down-to-earth selves. Perhaps one way to put it is that the Western-ness is movie-Western: cinematic, not really meant to be the real thing, lifted out of history and put to work for other purposes, in this case to provide imagery for spiritual matters. Not all the songs are in this Western mode; there are touches of gospel, Gregorian chant, and soft rock. The album as a whole really should seem like a hodge-podge, but it’s held together by Sill’s voice and visionary songwriting.

Although the lyrics are full of Christian symbols and allusions, and at least two of them seem to be quite explicitly Christian, the album’s liner notes make it sound as if Sill’s Christianity was eccentric at best. That’s as may be, but it needn’t bother the listener. I’m always at risk of hyperbole when praising a work that I really like, but it seems to me that this album as a whole is worthy of being ranked with anything produced in post-1965 popular music. And the final song, “The Donor” (this is the one I remembered as including the Kyrie) is, whatever Judee Sill may actually have believed, one of the most moving cries to God that anyone has ever put to music.

Strong words? Well, listen for yourself. And say a prayer for the soul of Judee Sill. She had been a drug addict before getting straight enough to pursue a serious music career and make Heart Food and its predecessor, Judee Sill. Like a lot of addicts, she apparently never really shook off the lure, and returned off and on to heroin and other drugs, including pain-killers for injuries suffered in a car accident. She never made another album, although there are some demos for a projected third, and in 1979 died alone of an overdose which, as in the case of Nick Drake, may or may not have been suicide.

A long and lonely road to Kingdom Come, says the first song, and I suppose that’s what Judee Sill had, although in years it was not so very long. But “The Donor” pretty well describes her relationship to the rest of us. The making of art is a curious thing. The artist does his work for motives almost never entirely pure—Judee Sill apparently wanted very much to be a star—completes it, and moves on. The gift remains.

This is the "road to Kingdom Come" song I remembered. It's the first song on the album.

And this is the last song, an 8-minute masterpiece.

So sad, and so true.

I wouldn't be surprised to hear some people say they don't like her voice. It does have a rather pronounced western twang, which I think works best with the folky songs, but for me it doesn't detract from the others. Listening to the album now, I was reminded that Robert had left one song off that tape, "Soldier of the Heart." I think he was right to do so; it's not bad but it's closer to rock than anything else on the album and seems out of place. He also included at least two songs from Sill's first album, Judee Sill, which I've never really given much attention.

There is a lot more information on Judee Sill, her life and work, on the web now than when I wrote the 2004 piece. There are live performances and at least one documentary on YouTube. And it turns out that the third album was very close to completion, and has since been issued. It's called Dreams Come True, and according to Thom Jurek at AllMusic is very good.

Another in a long line of musicians written about in this series that I have never heard of. I feel like I know nothing about music at all. :(

Oh well, there are plenty that you know about that I don't, or have heard their names but not their music.

"Mack"? What the hell? Never made that typo before.