I finally got Stalker from Netflix and watched it over a couple of nights last week. I'm sorry to say that I was disappointed. And that's not just a formula: I really am sorry, and I was, specifically, disappointed, because I had really wanted and expected to like it. Though I don't know where I got the expectation from, as I was at best unenthusiastic about the only other Tarkovsky film I've seen, Solaris.

It seems to be a very philosophical work, and interesting from that point of view. But to my sensibility the ideas were not especially well embodied; to discuss them is like discussing an essay, not a work of art. It's also a somewhat puzzling work. Many of Bergman's films are also both philosophical and puzzling, but I loved those immediately, even when I couldn't make much sense of them, because they're so visually rich and emotionally involving. Stalker just wasn't either of those for me. Perhaps it's a personal quirk, but there it is.

"Stalker" may not be the best translation of the title, or at any rate the best word for what it refers to. "Tracker" or perhaps "Guide" would seem more accurate. Moreover, it has associations in contemporary English which are both unpleasant and misleading as far as the movie is concerned. You might expect something with that title to fall into the thriller or horror categories. But the stalker of the title is a man who knows how to get around safely in a mysterious place called the Zone.

In an unspecified time and country, something has fallen out of the sky and landed in a rural area. No one knows what it was, but those who went to investigate never returned. The authorities have determined rough boundaries for the mysterious phenomenon and surrounded it with heavy security. The area is now known as the Zone, and almost no one ever enters it. The soldiers manning the barricades shoot anyone who tries, and are themselves too terrified to attempt it themselves. The exceptions to this blockade are the men known as stalkers, at least two that we know of, and anyone whom they are willing to guide. One of the two is one of the film's three principal characters--I don't recall that we even know his name--and the other was his mentor, referred to only as Porcupine.  We learn fairly early on that Porcupine was very skilled and that he is now dead, having hung himself shortly after an experience in the Zone that first made him rich and then drove him to suicide.

The other two principals are two men who have engaged the Stalker to take them into the Zone. One is a scientist--"the Professor"--and the other is a writer--"the Writer." The Stalker also has a wife and child, who have smaller though significant roles. There are very few other people and I'm not sure any of them ever speak.

The opening is promising, to me at least; others might think "what is this?!" It's a very long, very slow shot of a somewhat shabby-looking room seen through opening doors. There's a bed in the center. The camera moves over it and very slowly pans right-to-left across three figures in the bed: a woman, a child, and a man. The man is the stalker, the woman and child his wife and daughter. We see that the man is awake. The man gets up and gets dressed, obviously trying not to wake the others. But the woman is awake, too, and follows him out into the kitchen. He's apparently intending to go to the Zone, and the woman begs him not to, but he doesn't listen. He goes to a bar where he meets the Professor and the Writer.

All this is shot in a sort of sepia monochrome, as in this image, which was the only one I could find from the opening scene. I don't think it was quite this dark on the screen. 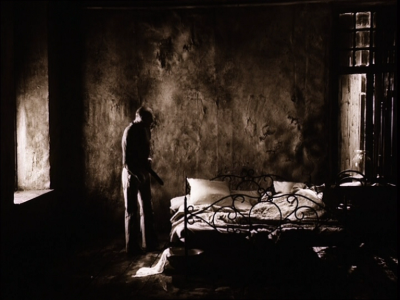 The sepia is maintained for the next half hour or so, while the men make their way toward the Zone, hiding from soldiers and eventually taking a little gasoline-powered railroad car into the Zone itself. All this takes place in what is possibly the ugliest environment I've ever seen. Imagine an old, decrepit, abandoned industrial zone: junk machinery, collapsing or makeshift  structures,  muddy streets, puddles of dirty water, all filmed in dingy brown. Such a scene could be made poetically evocative, and maybe some viewers do see it that way. I didn't. It was only ugly, and dead.

As the travelers enter the Zone normal colors appear, and we're in a landscape of meadows and forests. While this is a welcome relief from the industrial wasteland, it isn't photographed in such a way as to make it appear anything other than ordinary. And it's strewn with debris and ruins which continue the motif of desolation.

What follows is roughly two hours of these three men wandering around and having somewhat sententious philosophical talk, mostly on the part of the Writer.

It's in this long sequence that Stalker really fails for me. The Stalker tells the others (and us) of the mysterious powers and dangers of the Zone--"a complex maze of traps," but containing, if one can evade the dangers and find it, a place called the Room in which one's deepest desires are granted. Apparently they are searching for the Room, which Porcupine had found before he killed himself. (What is your deepest desire? Perhaps not what you think it is.) The Stalker tells us, but nothing is shown that seems to support his warnings; no atmosphere is created. Only in one scene did I ever get any sense of either mystery or menace about the place. And to make things worse, even in the Zone there is a great deal of that industrial ruin, with its toxic-looking pools and general hideousness. The journey, or search, never developed much dramatic tension for me.

If you've seen it and are thinking "You're wrong; I was deeply moved; it's a masterpiece," and are eager to explain to me why that's true, well, okay, I'll listen. Maybe it is. In the abstract, I see its merits. But for the most part, after that first thirty or forty minutes, it engaged me only mentally, not emotionally. There's a good deal to think about here, but not as much to enjoy. I may see it again sometime, and perhaps have a better impression.

Speaking of Bergman: Stu sent me this BBC piece which calls him "the greatest film-maker who ever lived." I agree with the sentiment in general, and also with most of the specific opinions of the author. He refers to "Bergman's Christian humanism," which I think is accurate, not withstanding that Bergman was not a believer. As the writer says, "...one can sketch a notion of salvation in his depiction of Christian love and its virtues – fidelity, sanctity, devotion."

I have not seen his last film, Saraband, and rather like the idea that there is still at least one to see (not counting his very earliest ones, which in my experience are not so great, interesting mainly because he made them). I saw the movie version, abridged from a TV series, of Scenes From A Marriage long ago, and would like to see the whole thing. I notice this writer mentions Summer With Monika. I only saw it relatively recently. It's also an earlier one (1953), among the first of his mature and lasting works: a very beautiful but heartbreaking picture of young and impermanent love.

Speaking of movies, I meant to mention, when I wrote about Wise Blood a few weeks ago, this article on Flannery O'Connor which Rob G sent me. It mentions the film favorably, and I think that was part of the reason that I finally got around to watching it.

What came ye forth to see?

I'm with you on Stalker. I was very disappointed as well. I've seen four Tarkovsky films and the only one that I've liked is Andrei Rublev.

I'm perversely glad to hear it--that it's not just me. I deliberately did not read any criticism at all about it before watching it, and am interested in reading some now.

I saw Stalker a couple of weeks ago and simply loved it. I thought it was stunningly beautiful.

Well, there you go. De gustibus etc. I thought the opening five or ten minutes was very beautiful. After that...not.

Six or seven people from theology were there and we were just stunned by the beauty of it.The boys from the Jesuit house said they sat up for three hours talking about it.

Talking about it for three hours I can see. Being stunned by the beauty I can't see. Actually I'm thinking not so much "de gustibus" as "no accounting for taste".

Look & See, A Portrait of Wendell Berry from Robert Redford and Terrence Malick now streaming on Netflix, or so I am told. I can't get on Netflix from this computer.

I saw that the other day too -- forgot to mention it. Not available on DVD yet, afaik.

Yes, it is there.