I’ve been trying for months to decide which of three consecutive Neil Young albums to review: Everybody Knows This Is Nowhere (1969), After the Gold Rush (1970), and Harvest (1972). I give up so I’m going to talk about all three. I’ve never owned any of these three records. For a time, they weren’t on Spotify so I had to settle for Youtube. Now they are on Spotify, so I get to listen to a different set of ads. I don’t know much about his other music except Rust Never Sleeps. 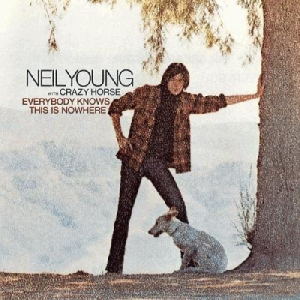 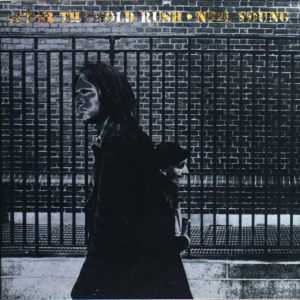 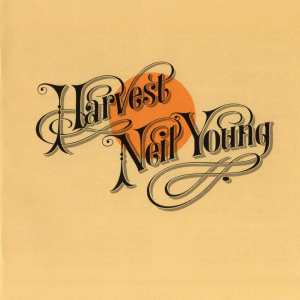 Each album is distinctive, but they all seem to go together like a triptych. Everybody is county/folk/bluesish/hard rock. After the Goldrush emphasized harmony and piano and is (relatively) less jammish. Harvest has the mouth harp and the steel guitar—and some orchestration. It also is the most cleanly produced. On all the albums his guitar playing is dirty, but it seems appropriate (I mean “awesome”). The albums are well-produced in a way to accent the positive quality of his distinctive guitar style. Crazy Horse was the main backup on Everybody and After the Gold Rush. Harvest didn’t have Crazy Horse, but had James Taylor, Linda Ronstadt, David Crosby, Steven Stills, and Graham Nash plus some other session musicians.

Young’s distinctive voice should be irritating, but it isn’t. Why he sings in falsetto, I don’t know. He is one of those singers who can get away with a weird voice—like Dylan or, to a lesser extent, Jon Anderson. I could listen to all three of these albums in a row and not tire of the voice. His producers use more or less reverb in a way that enhances the sense of the song. On “A Man Needs a Maid,” for instance, there is none whatsoever, which gives it more of a sense of loneliness and isolation. This is enhanced by the pronounced reverb on the previous song, “Harvest.”

He is a confessional singer like James Taylor and Carole King, who were also recording at that time, but his interior life is much more interesting than either of theirs—and more poetic. I must admit many of Young’s lyrics are opaque to me. Somehow, though, the evocative images coupled with the arrangement make them emotionally charged. When they do make sense, such as in “Old Man,” or almost so, as in “Cowgirl in the Sand,” they are great.

I will include my favorite cut from all three. These are arbitrary, especially for Harvest where it is a three-way tie.

“Cowgirl in the Sand.” I chose this one for the music. The lyrics I’m not so sure of. In the acoustic intro you can barely hear a note or two from the rhythm guitar in the “right” speaker before it breaks loose when the song starts in earnest.

“After the Gold Rush.” Man, what a song! Just Neil, the piano and the French Horn. And the dream is so rich and in some ways terrifying, including the space ship taking the remnant to a new home.

A Man Needs a Maid.” You can just feel his pain and the tension between just giving up by getting a maid and actually seeing her again. It has a cool use of the orchestra’s bells.

Probably if it was a different day I would have chosen “Old Man” or “The Needle and the Damage Done,” which is a great song to play on the guitar.

Young supported Reagan in the 1980s, but I don’t think he could be accused of being a Republican. He is more a libertarian. He sometimes gets political in his lyrics, such as “Southern Man” and “Alabama.” He doesn’t seem to like the South much.

Well here are three albums I know well. Probably owned them on vinyl and now have the CDs. Certainly three of Young's best and best known. All good, all songs, you are correct in that depending on the day you could choose a different song to share. I'm a big fan of his extended/long songs, so the first album is my favorite of the three, with "Down by the River" and "Cowgirl in the Sand". Harvest is one of those albums I love, but a little too much play over the years makes me reticent about sliding it out of the shelf and putting it in. Young's politics seems to be concern for people in my estimation - I would call him a humanist.

Everybody Knows is the only NY album that I know and like throughout. But I don't know many. I think I would have picked "Down By the River" instead of "Cowgirl" as my one example, but they're both great, although as *songs* they're kind of lacking. I haven't heard Goldrush for a long time, but as I recall I thought it was kind of uneven, apart from the title song, which like everybody I love. Harvest always sort of left me cold. It's good but for whatever reason it just never touched me. But then I haven't heard it since it came out. It was another heard-too-much-in-the-record-store album.

"Young's politics seems to be concern for people in my estimation - I would call him a humanist." Yeah, that makes sense.

Let me put in a mild word for his first album, which was just called Neil Young. It's uneven at best but I really like the first side of the LP, and the song "The Old Laughing Lady" is as good as anything on these other albums. I guess you can probably find it on YouTube.

Also, his songs were always the high point of the Buffalo Springfield albums for me, and that's saying a lot.

I don't know what it is about his voice but Robert is correct, you can listen to it for a long time and not get tired of it. I'm not sure he chooses to sing in a falsetto, that seems to be the voice he was given. I like the MTV Unplugged album/CD a lot too, "The Old Laughing Lady" is on that, don't think I own his first solo disc.

And the sequel to Harvest, was it called Harvest Moon? That one is really great too. I was dating a Jamaican girl at the time it was released and the story was funny about her stopping at a record store to get it for me, not having any idea who Neil Young was only that I wanted the album. :)

An unplugged "Old Laughing Lady" wouldn't be as good, as the arrangement is a big part of the effect.

I used to hear some funny requests from parents looking for records their children had asked for (early '70s).

There's a funny story about Neil Young during the "We Are the World" sessions. Apparently he sang his bit and then was told by the sound booth that he was out of tune. He answered, "But that's my style."

Since he's a fellow Canadian I feel I certain obligation to listen to his music from time to time, and in fact a few years ago I listened to *all* of his records in chronological order. Generally speaking I don't love his music, but I do like it well enough. "Rust Never Sleeps" is my favourite of his records, followed by "Harvest" and "Harvest Moon". I'm also a big admirer of "Sleeps with Angels", the mildest-mannered Crazy Horse record in his catalogue, and "Freedom", which has the song "Keep on Rockin' in the Free World".

I'm surprised to learn he was a Reagan supporter. My impression of his politics had been rather different. I believe he made an anti-Bush record during the Bush years.

If I had a penny for every time I looked around the pig-sty that is our house and hummed to myself "A Man Needs a Maid", I would have a maid.

I forgot about Freedom, that is a fantastic album!

Craig, I remember your NY post but had the impression you were more enthusiastic. Or rather that's my recollection of my impression. I really should try more of his work.

Another mild recommendation: I really like most of the self-titled Crazy Horse album.

I love all three of these records. Probably over listened. Cowgirl in the Sand is such a great song

Yesterday I ran across a review of these three plus the first album of. It reminded me of why I didn't care much for Harvest. It was described as "mellow". I always disliked mellow. Mostly it was a synonym for boring.

Was listening to Everyone Knows on the way to work. I had forgotten that "Down by the River" is mainly an extended instrumental with just occasional lyrics mixed in. The ragged guitar playing is really great.

Yeah, like I said earlier, not really much of a *song*. If you can't separate a song from its performance, it's not a very good song. Which doesn't mean that the track taken as a whole can't be great.

Here's the review I was talking about:

"the guy can write a simple tune over a chord change that hollows you out completely."
I wish I had said that. It is one of the most important reasons I like Young.

Everybody knows this is nowhere is perhaps my all time most beloved record. I know I said that above. I'm just saying it again.

People tend to focus on the long tracks but I love the shorter ones, too, especially "Round and Round" and "Running Dry."

Love both of those

After listening to all three more than a few times this past week, IMHO Harvest is the best of the three from beginning to end. The two aforementioned long songs on EKTIN are my favorites, but "Southern Man" on ATGR may be the best. It has been years since I listened to any of this stuff so I was surprised how great that song is. "Heart of Gold" and "Old Man" are pretty classic though, and deserve all of the play they have received.

Harvest is pretty and polished but relatively dull.

I listened to After the Gold Rush for the first time in many years. My basic opinion is the same as it was way back when--some great moments but uneven at best. A lot of it seems downright dull to me. Oops, there's that word again.

Agreed, though the lyrics are awfully heavy-handed. "Sweet Home Alabam" has a not-very-clever rejoinder to it.

A lot of the album kind of feels like they were smoking too much marijuana to do their best. But obviously millions of fans and critics disagree with me.

Pot wasn't half the story.

Sweet Home Alabama was knocked off in a few hours to fill the album.

I'm sure. Danny Whitten was well on his way to death by drugs. I don't know about Young. The album has a sluggish, druggy feel. Not psychedelic, just...sluggish.

I didn't know that. I've actually never much liked the song, although it's become a state anthem.

I listened to about half of Harvest. Still seems kind of dull to me. I've also listened to On the Beach, twice. It's one of the two or three post-Gold-Rush NY albums I have, bought as used cds some time ago and not really listened to. I like On the Beach quite well, more than Gold Rush, actually, apart from the latter's title song.

I just noticed that Judee Sill and Neil Young are both "week 43", Mac.