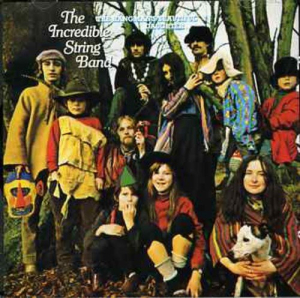 I don't know, maybe you had to be there. I suspect this album and this band don't have a great many fans who didn't experience their music when it was new in the late '60s. The album is as good a candidate as any that's appeared in this series to meet with enthusiasm from absolutely no one apart from the person who's writing about it. Perhaps Rupert Hine's Waving Not Drowning ranks with it in general listener non-appeal, though for utterly different reasons.

I'm writing about it anyway, partly because there's always a chance that someone who's never heard it will read this and listen to the sample tracks and be converted, and partly in simple homage. The Incredible String Band were a decidedly eccentric outfit and were never widely popular, but they had and still have a very zealous following. They were very important to me at one time, and still are on the rare occasions when I take those old albums off the shelf. Their music was eclectic to say the least, and their richly imagistic lyrics spoke of an equally eclectic spirituality with a significant Christian element. It was a light to me in some fairly dark times, almost the only thread connecting me to the transcendent and to a sense of (or just hope for) cosmic meaning.

"Those albums" are principally three: this one and the two that came a year or so after it, Wee Tam and Big Huge. The latter two were originally intended to be a double LP but for whatever reason, probably the record company's wish, were released separately in the U.S. There's little reason to choose any of the three over the others: all have many great and a few not-so-great tracks. There are a number of other albums, and most of them, too, have some very-good-to-great stuff. I own them all (I think) and am happy to have them, but the good in those is to my taste mostly not quite so brilliant as the best of these three, and is lesser in proportion to the not-as-good.

The band consisted principally of Robin Williamson and Mike Heron, with some assistance on this and a few other albums from their then-girlfriends, Licorice and Rose (respectively?). They started out as a folk duo, and more or less remained in the not-rock-and-roll area. I will send you to Wikipedia or AllMusic for more information on their history.

I first heard of them when they were compared very negatively to Pentangle in a review, treated simply as failed folkies. It was an early lesson in not trusting critics unless and until you have reason to think they are more or less on your wavelength. I had a similar experience with Astral Weeks, a reviewer in one of the mainstream stereo magazines dismissed it as a lot of meaningless yelling; I was stunned when I finally heard the album.

"Koeeoaddi There" is the first song on the album, and therefore the first of the ISB's music that I ever heard, and I was immediately fascinated. There's a bit of a story about that first hearing, which I relate in my forthcoming-one-way-or-another book--nothing dramatic, just a very vivid memory. I've made occasional efforts since the internet, Google, Facebook, etc., became available to find the person who made that introduction, but haven't been able to. I'd like to thank him. (He also gave me my real introduction to Leonard Cohen, whom I'd mistakenly dismissed because I'd only heard "Suzanne" and thought it was sentimental.)

One learned pretty quickly to distinguish the Robin songs from the Mike songs, even more perhaps than the Paul songs from the John songs in the Beatles. "Koeeoaddi There" is obviously a Robin song. "A Very Cellular Song" is a Mike song. It's thirteen minutes long. The "Goodnight" part is a Bahamian gospel song. The Grateful Dead used to close out their shows with it.

I said the ISB had a cult following. Some members of that cult, having spent years amassing information on the band and posting it on a web site, published a book called beGLAD: An Incredible String Band Compendium. Another long-time fan provided an introduction: Rowan Williams, who was at the time he wrote it Archbishop of Canterbury.

There was no one quite like them.... If I go back to the start, I'd have to say again that it was simply a discovery of poetry; and as such--risking the embarrassment that so regularly goes with my particular vocation--I'd also have to say that it was a discovery of the holy; not the solemn, not the saintly, but the holy, which makes you silent and makes you laugh and which above all makes the landscape different once and for all.

I wouldn't say it was a discovery of poetry for me--Williams is a couple of years younger than me, and I had already made that discovery when I heard the group--but otherwise, yes. None of that would have made much difference if it hadn't been set in very appealing, rich, and imaginative music which, though obviously and even amusingly of the '60s, nevertheless sounds as fresh today as it did fifty years ago--at least to those of us who, as I said earlier, were there.

That is funny, Mac. The first paragraph. Yes, this music would be tough to get into. :)

I keep thinking about writing one or two more reviews before the end of the year. Don't know how much space there is.

It's not tough at all! [sigh] But I do understand, at least intellectually that many poor souls find it so, hence my disclaimer.

There is pretty much all the space left, so please do write more if you're so inclined. Otherwise I'll fill it up with my eccentric pets. :-) I'm pretty sure there were some albums in the original claims that haven't yet been written about.

Whenever I think about doing something really huge and obvious like Highway 61 Revisited I end up talking myself out of it, thinking that I probably wouldn't have anything to say that hasn't already been said, and that everybody who's at all interested already knows all about it. Though it's enjoyable to read someone's personal history with an album.

Along the lines of not doing the huge and obvious I want to write about Terry Allen's Lubbock (on everything), and of course also a little of my personal history with it.

I don't think I've ever even heard of Terry Allen.

And you know I was also there then. And I love the Incredible String Band.
Actually it wasn't really a band it was in every shifting hippie commune that made music.

Hate to disagree with a fan, but I don't think that's accurate. It was a duo of professional musicians with occasional assistance. I haven't read this book, btw. Just discovered and bought it a few months ago and haven't gotten to it yet. It seems to be full of ISB lore which I expect to be interesting.

I'm pretty sure there were some albums in the original claims that haven't yet been written about.

I'm doing two more for sure: Sigur Ros's 'Takk' and the Vasks violin concerto. Mebbe one additional if I can fit it in -- won't likely be something that someone else would snag though.

Oh, that's right, I'd forgotten you were still planning those. There are 8 weeks left, so 6 available slots.

No need to apologize, Janet. I know how it goes. Pledges for these 52 Things projects are sort of like monetary pledges in fundraisers--you know you're not going to collect on a certain number of them. :-) Anyway, you weren't keen on this project to start with.

I started listening determined to prove you wrong. But no, you were right.

Paul, We did eventually post some spoilers on BR 2049. Did you ever see them?

So sad. I can only feel pity for you.

Janet, no slight or complaint was intended.

Oh goodness. I don't even know why you said that.

But I certainly didn't feel slighted or complained at. Mostly I just feel wore out.

That about the slight was in response to your 11:06 comment--thought maybe you thought maybe I was overlooking your contributions to the previous projects.

Oh no. Not at all. I was just bragging. I thought better of it after, but too late! ;-)

I’ve said it before, but I’ll say it again anyway – don’t know why I missed out on all this music listening you folks have done. After reading what Rowan Williams wrote, though, I think it means I haven’t poetic leanings. But these posts have been a real education for me. My favorite wee nugget in this one has to the names Licorice and Rose.

Do I get points for instructing the ignorant, then? :-)

Some people just don't have the pop music bug. It's funny: I happen to be married to the least-pop-music-conscious baby boomer on the face of the earth.

If you follow the links for Licorice and Rose on the ISB Wikipedia page you learn that Rose seems to have done ok, but Licorice disappeared in 1987 and has not been seen or heard of since.