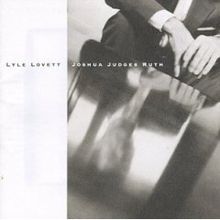 Sometimes music feels like the soundtrack to your life. I have been avidly listening to Lyle Lovett since the release of his third album, Lyle Lovett and His Large Band. Also since that time, I have seen him in concert as much as has been possible without traveling a long distance. I managed to make each of my wives and my parents converts to the Lyle Lovett cause. That cause is simply music played brilliantly, being a classically cool performer, with quirky songs that cross many genres of musical style. David Bowie was the musical hero of my youth; Lyle Lovett has filled that role in my adulthood.

Joshua Judges Ruth was released in 1992, and typing that makes me wonder in a vague sort of way where I was in life twenty-five years ago, besides just geographically and employment-wise. Having purchased the aforementioned previous album I of course also bought this one and recall being more entranced with it than its predecessor. I guess the “where I was in life” comment goes back to my first sentence about music being a soundtrack to your life. How is it that at whatever age I was then I was so taken by Lyle Lovett’s music?

The first time I saw him on tour must have been in support of this album, so the set list was heavily filled with its songs. If you have ever seen him in concert then you know that Lovett has a knack for between song banter; he is quite funny, and at least it seems that most of what he says is spontaneous. After (or, maybe before) singing the opening track, “I’ve Been to Memphis”, he explained to us that the refrain had nothing to do with any part of a woman’s anatomy. It goes:

This is a good example of how Lovett likes to do amusing things with lyrics to catch the listener off guard.

“Church” is the second track, and is the only song that Lovett seems to play at every single live show; at least all of the fifteen or so shows I have attended. It is an amusing story about attending a church service where the preacher goes on and on, not allowing anyone to leave. The album version has what sounds like a full gospel choir, so I enjoy it in concert when he has many back-up singers with him, and not as much if it is only he and the band. It is a fun song, and along with the opening and closing tracks, one of only three upbeat songs on the album. That does not sound like a ringing endorsement (lack of upbeat tracks), but these songs are so good, so well played by the musicians, and so meticulously sung by Lyle Lovett that I really feel Joshua Judges Ruth is the high mark in his catalog, more so than even Pontiac, his second and very highly regarded album.

“North Dakota” may be my all-time favorite LL song. It is just lovely, with backing vocals by Rickie Lee Jones, and tells us about cowboys in Texas and in North Dakota. I am always very happy when he plays it in concert. Here is a video of the album version:

“She’s Already Made Up Her Mind”, “You’ve Been So Good Up To Now”, “All My Love Is Gone”, and “She’s Leaving Me Because She Really Wants To” all fall in the realm of man who has been wronged to some extent by a woman and is now unhappy. The last one does at least give us a little LL humor with its title. The first time I heard him play it in concert he introduced it as being “about the happiest woman in the world, my ex-girlfriend”. The older I get the more these songs kind of make me sad, but in an appreciation of art melancholy kind of way.

“Since The Last Time” and “Family Reserve” are exceptionally well-written and interesting songs about death. The first is rather long with a lot of set-up to eventually lead you towards the surprise ending, which is that the singer is the person dead and in the coffin at the funeral described:

While “Family Reserve” describes how we never really lose our loved ones because they live on in our memories:

And we’re all gonna be here forever
So mama, don’t you make such a stir
Just put down that camera
And come on and join up
The last of the family reserve

My own “family reserve” seems to be getting smaller and smaller, and listening to this song recently made me tear up a little. Again, there is humor abounding within a song with such a morbid theme.

Despite all of this sadness, loss, and melancholy LL chooses to end Joshua Judges Ruth on an upbeat and funny note with “She Makes Me Feel Good”. He has found love again, if perhaps not with quite the right girl:

I will attach one more video, but it does not have any songs from JJR, instead it is a fairly recent NPR Tiny Desk Concert featuring Lyle and his fiddle player Luke Bulla (who is really great). The story goes that Lyle contacted NPR and asked if he could perform for one of their Tiny Desk concerts, they obliged. It is just under 18 minutes, and a lot of fun. Three songs, banter, two performers. Watch this and you may want to catch Lyle Lovett in concert next time he plays in a city near you.

--Stu Moore is in need of finding the woman described in “She Makes Me Feel Good”. But then again, he might not be able to handle it.

But seriously, I should have mentioned the title of the album, which is fun. Not only three successive books of the Bible, but perhaps never before this album thought of as a short statement, Joshua judges Ruth.

I love this album, but I don't have time to even read the post at the moment.

I concur completely with Stu's opinion of this post.

I don't think Lyle was the first to think of those three words that way, though. Hazy fragments of memory are suggesting to me that it's used in an old evangelical/fundamentalist joke of some kind. Hard to think it would have escaped notice considering how many Protestant children and teenagers had to memorize the list of books of the Bible and could spit it out rapid-fire.

I like this album a lot, but I think I like Pontiac better. Weren't some of the songs a product of his getting dumped by that obnoxious actress?

I can vouch for the fact that he's great live, though I've only seen him once. He has a really first-rate group of musicians.

This album is pre-Julia Roberts. The breakup album is The Road to Ensenada. I think it was a work schedule amicable breakup, not a dumping. I have read that they remain friends.

Well heck, here I've been disliking her all these years for breaking his heart.

I also love this record. "She's Leaving Me Because She Really Wants To" is one of the great song titles. It's almost the Platonic Form of a certain kind of country song.

There aren't many songwriters who are as witty as Lovett. He almost always has a couple of good jokes on his records -- good enough that they don't get old on repetition.

Just the name of his band always makes me chuckle. "It's not big, it's large."

Wow, what an idiot. I didn't even catch the significance of the title until Stu mentioned it here.

You didn't grow up Protestant, right? :-)

Well, I didn't originally get that it was a sentence, I just thought it was the names of books of the Bible. Since Robert teaches in a seminary, I'm pretty sure he recognized where it came from.

I'm talking about seeing it as a sentence. And people say fundamentalism doesn't have a rich culture....

I never gave it too much thought until writing this post, but with the nature of so many songs it makes sense. Male singing the songs, many about being lonely after a woman has left him, thus he is "judging" her.

I only first saw it as a sentence, even though I knew they were all books in the Old Testament.

Interesting that Protestant kids had to "memorize the list of books of the Bible and could spit it out rapid-fire". I had no idea. Quite a contrast with me as a Catholic kid who would have been able to come up with only Matthew, Mark, Luke, and John.

:-) I've heard it done. I must have made a stab at it because the first few come out pretty quickly. If you say it out loud the "sentence-ness" of "Joshua Judges Ruth" kind of jumps out.

I have sung a song of the names of the books of the Bible hundreds of times with my kids and that never occurred to me even when I got the album. It wasn't until you said something about it here a while back that I heard it.

And in the song, "Joshua, Judges, Ruth" was in a a little phrase together.

Well, I saw it as a sentence, but didn't catch the biblical reference. And I'm a bible kind of guy.

Well, there you go.

This conversation reminds me in a sort of oblique way of the blue/black/white/gold dress. The different ways that people perceive things is fascinating to me, and it also demonstrates why we sometimes have such horrible misunderstandings.

Yeah, I guess so. I'm not surprised that the JJR thing had never occurred to Robert, but I am that it didn't occur to you as a result of singing that song.

We had to memorize the books of the Bible (Protestant Canon) when I was in 2nd grade at a public grade school. My teacher, Mrs. Maynard, hadn't got the memo.

So I guess if Rob is sending his in this week, I should get to work. Unless you just really want to do it, Maclin.

Yes, I do have Rob's, and Robert has promised something for next week, so that will wrap it up. I hope you didn't have your heart set on one in particular. I find that I'm regretting a little that I never hit some of the categories I had meant to: blues, prog, metal, jazz. At least I don't think we did any of those.

I did, but that's okay. I'll just listen to it.

"I find that I'm regretting a little that I never hit some of the categories I had meant to: blues, prog, metal, jazz. At least I don't think we did any of those."

I came really close to doing the first Pat Metheny Group record, but did the Vasks instead, which I think ended up being the only classical album. The other one I'd thought about doing is the odd, charming little album Dark Bird is Home by Norwegian singer/songwriter Kristian Mattson, who goes by the stage name The Tallest Man on Earth.

Somehow I missed this comment earlier. Something to do with children running around, possibly.

There was one other classical album: Part's Kanon Pokajonen. And I think I have a freebie track by Tallest Man that I flagged as a four-star single. The name rings a bell anyway.

That Tallest Man record is a great little album. Although it came out a couple years back I just discovered it this past summer and it became a recent favorite.