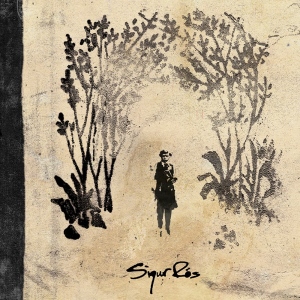 I first heard Sigur Ros around the year 2000, but at the time I wasn’t much taken with them and they fell off my musical radar until I unknowingly heard them again in 2008. I had watched the movie Breaking and Entering and was struck by the song that played over the closing credits. As it turned out, it was their song “Se lest,” and I traced it to their 2005 album Takk. Around this very same time a friend who was visiting England saw the video for “Glosoli” in some sort of church service or religious gathering. When I emailed him to tell him about Takk… he responded by saying he had been planning to write me about “Glosoli” in his next email. Not long after that I watched the documentary/concert film Heima, and it’s that, really, that turned me into a fan.

This album then is near the top of my all-time favorites list, being my favorite release from one of my favorite groups. Most of the songs are in the band’s native Icelandic, although their made-up language “Hopelandic” appears here and there, and is featured on three of the album’s tracks. Musically the album does a lot with time signature variations, which makes it somewhat more interesting rhythmically than your typical rock album, even if most of the tempi are on the slow side. There’s only one song I don’t really care for, and even that one I don’t think of as bad, just so-so.

Takk… opens with the title track, a two-minute long ambient introduction leading directly into “Glosoli,” the video of which Mac has posted here a number of times. Following that is probably the album’s best known song, “Hoppipolla” (“Hopping in Puddles”), which has been used in several films and TV shows and reached the Top 25 on the UK charts. It’s the most accessible, “radio-friendly” track on the album and like “Glosoli” has a great video:

For “Se lest” (“I See a Train”) the song that prompted me to buy the album, I’m including the live version from the Heima film. I love the shots of the audience, especially the children, and the use of the local marching band for the horn section is a neat thing. Heima is full of beautiful footage of Iceland, like the shots that appear in the video. By the way, the word written on paper as the song begins is the name of the town where that particular song was filmed. The band had done free unannounced concerts all over Iceland, and the film documents the various towns in which the performances occurred.

“Saeglopur” (“Lost at Sea”) was another popular track from the album, also used in movies and on TV, perhaps most prominently in a video game ad for “Prince of Persia.” This one starts quietly, but like “Glosoli” turns a good bit noisier a couple minutes in.

For me the highlight of the second half of the album is the soft and lovely “Andvari” (“Zephyr”), which ends with a breathtaking section featuring the strings continuing to play by themselves after the band has faded out. It’s my favorite string arrangement in all of pop music, with the unusual time signature adding to, rather than distracting from, the peaceful beauty of it all.

The album ends with another quiet song, “Heysatan” (“The Haystack”), mostly voice and piano, a very fitting way to close the album.

I don’t want to get rhapsodic about how much I like this record, so I’ll just say that what I find most attractive is the combining of strong melody with sheer power. I’ve always liked bands that were able to pull that off (Chameleons, Cocteau Twins, Slowdive) and I think that Sigur Ros may be the epitome of that. Listen to Takk… or watch Heima and I think you’ll see what I mean.

I forgot to mention in the piece that "Takk" means "thanks."

Also I see that I left out a word in the penultimate paragraph. "Fitting" should appear between "very" and "way."

So for posting this I guess I can say, "Takk, Mac!"

[you're welcome in Icelandic]

I've corrected that sentence. I have grandsons in custody so am not at liberty to say much. I really haven't listened to this album very much, although I've had it for a while. Another casualty of music overload. But on brief acquaintance I think I will really like it.

Heima is a really beautiful film, even apart from the music. I think I'll watch it again sometime before too long.

Several years ago, I watched Heima on someone's recommendation, either Rob's or Maclin's I'm sure, and thought it was really wonderful. So beautiful, and I really liked the members of the band. They were so much real people and not the self-important celebrities that we are used to.

The scene where they are performing outside with snow on the ground--or some indication that it's cold, cold--was rather amazing to me. How do play guitar when your hands are that frozen?

Beats me. I'm not a real guitar player but whatever little ability I do have is noticeably diminished if my hands are even uncomfortably chilly, let alone frozen. ;-)

And yes, it's true, at least at that point in their career the guys in Sigur Ros had no Rock Star vibe about them at all. But then it's not Rock music either.

I'm going to be offline through at least Monday evening, so wanted to wish everyone a blessed, safe Christmas! Cheers.

Likewise to you, and to everyone.

Grumpy, it was probably Rob who made that recommendation. At the time I don't think I'd even heard it. I think I'm going to agree with his view of it though. By the way this is not the last one--#52 will appear next week.