I consider this to be one of the major lyric poems of the 19th century. A lot of people would agree with me. If I had continued my literature studies many years ago, I would have specialized in the Victorians. They understood the crisis that was coming upon our civilization with the fading of Christianity. Arnold looks a little foolish now with his hope that culture (in the old-fashioned sense--knowledgeable, thoughtful, humane) would or could fill the gap. But he saw the problem.

The sea is calm tonight.
The tide is full, the moon lies fair
Upon the straits; on the French coast the light
Gleams and is gone; the cliffs of England stand,
Glimmering and vast, out in the tranquil bay.
Come to the window, sweet is the night-air!
Only, from the long line of spray
Where the sea meets the moon-blanched land,
Listen! you hear the grating roar
Of pebbles which the waves draw back, and fling,
At their return, up the high strand,
Begin, and cease, and then again begin,
With tremulous cadence slow, and bring
The eternal note of sadness in.
Sophocles long ago
Heard it on the Ægean, and it brought
Into his mind the turbid ebb and flow
Of human misery; we
Find also in the sound a thought,
Hearing it by this distant northern sea.
The Sea of Faith
Was once, too, at the full, and round earth’s shore
Lay like the folds of a bright girdle furled.
But now I only hear
Its melancholy, long, withdrawing roar,
Retreating, to the breath
Of the night-wind, down the vast edges drear
And naked shingles of the world.
Ah, love, let us be true
To one another! for the world, which seems
To lie before us like a land of dreams,
So various, so beautiful, so new,
Hath really neither joy, nor love, nor light,
Nor certitude, nor peace, nor help for pain;
And we are here as on a darkling plain
Swept with confused alarms of struggle and flight,
Where ignorant armies clash by night. 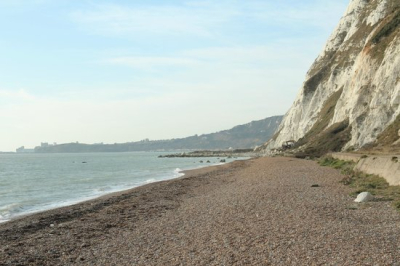 Photo lifted from TripAdvisor.com, and said to be in fact a picture of Dover Beach. I confess that I read this poem many times without quite knowing what the word "shingle" means here, a shingle in my world being a flat thing which is part of the covering of a roof. Apparently it refers to the pebbles of which a pebble beach is comprised.
The phrase "ignorant armies" seems especially apt now, with the internet providing the field of battle.
--Mac is the proprietor of this blog.

We can hear the waves through his verse: they “begin, and cease, and then again begin” (12) with a pause in the middle showing the waves’ brief pause. So beautiful.
"Eternal note of sadness" - to be pondered.
"The phrase 'ignorant armies' seems especially apt now, with the internet providing the field of battle" -- true enough.

Armies are probably always ignorant. Not to demean them, but that they are kept in the dark by those sending them forth.

I think Arnold meant to include the generals, too.

Mary, I seem to remember a teacher, or maybe it was a textbook, pointing out the line about the waves.

I have been wanting to say something about this poem, but all I can think is that it is so true, and so sad.

I hadn't read this poem for a very long time and when I read it again a couple of days ago, a few places like "light Gleams and is gone", "waves draw back and fling At their return", "Lay like the folds of a bright girdle furled" made me think of Gerard Manley Hopkins, and then how he worked through pessimism and came out of it the other side of Arnold.

The difference in their responses being pretty striking. If I remember correctly Arnold had at least some respect for the Church but I don't know if he ever gave it serious consideration. He and Newman were rough contemporaries and surely Arnold must have had something to say about him at some point, but if I've ever come across it I don't remember now.

I don't know if I have ever read anything by Arnold except this poem. Maybe I should, although it might not be the best thing for me to read at present.

I seem to remember there being some discussion about him before and thinking I should look for his work.

It's been a *long* time since I read his prose, but based on my vague memories I wouldn't necessarily recommend it unless you're specifically interested in the intellectual history of the times. But I would like to know what if anything he had to say about Newman and his works.

He does have some other good poems but as far as I know nothing as great as this.

"Even people who heard them continually, and felt them to be different from any other sermons, hardly estimated their real power, or knew at the time the influence which the sermons were having upon them. . . . They made men think of the things which the preacher spoke of, and not of the sermon or the preacher.' Matthew Arnold, a theological liberal who had no sympathy whatever with the Catholic Revival, pays a similar tribute to the influence of Newman's preaching: ' Who,' he writes, ' could resist the charm of that spiritual apparition, gliding in the dim afternoon light along the aisles of St. Mary's, rising into the pulpit, and then in the most entrancing of voices breaking the silence with words and thoughts which were a religious music--subtle, sweet, mournful. Happy the man who in the susceptible season of youth hears such voices. They are a possession to him for ever.'"
http://anglicanhistory.org/bios/jhnewman.html

"he never ceased to admire in him the combination of traits —the mingled gentleness and irony, lucidity and urbanity — which had captivated his boyish imagination, nor to revere in him the inspirer of his youth."
https://newspapers.bc.edu/?a=d&d=BOSTONSH18940421-01.2.14

Here's a whole article about it:

Thank you! That's what I would have expected from Arnold as I remember him from 40 years ago. Including the "impossible solution" part.

This is a good poem Because the sea is a real symbol of Faitj and the tide going out is a great symbol for the loss of faith. It is remarkable because I think it may have been the only good or memorable poem the author wrote

His father wrote very directly against Newman, and one of his brothers was a convert who was very close to Newman (worked for a time at the Oratory School, I think, and was recruited by Newman to teach English Literature at the university in Dublin he was involved with).

Very Grumpy, I think he did write other good poems. But this is probably his only great one.

Not entirely as I remembered the details, but not far off: https://en.wikipedia.org/wiki/Tom_Arnold_(literary_scholar)

Neuhaus draws upon Arnold's image in the _Death on a Friday Afternoon_ section "Dereliction." How much am I myself capable of learning? How much am I able/willing to share with my students as I teach a bit of poetry to them this current season? Questions I am not yet able to answer.

Are you still teaching?

Yes. I am an adjunct English instructor for McMurry University, a U. Methodist school in a nearby city. About to leave now to drive there. Coming back to the blog just now to post the title of a hymn that fits "Dover Beach" - "Jesus calls us o'er the tumult of our life's wild restless sea." Gotta go follow. Thinking of my AMDG friend with gratitude.

I remember that one. Good luck with your teaching.

Thing is, Maclin, Mary retired a long time before you did. Retiring seems to be a difficult thing to do.

I'm getting better at it.

Well, that was always in the plan.