Jove gazed
On woven mazes
Of patterned movement as the atoms whirled.
His glance turned
Into dancing, burning
Colour-gods who rushed upon that sullen world,
Waking, re-making, exalting it anew –
Silver and purple, shrill-voiced yellow, turgid crimson, and virgin blue.
Jove stared
On overbearing
And aching splendour of the naked rocks.
Where his gaze smote,
Hazily floated
To mount like thistledown in countless flocks,
Fruit-loving, root-loving gods, cool and green
Of feathery grasses, heather and orchard, pollen’d lily, the olive and the bean.
Jove laughed.
Like cloven-shafted
Lightning, his laughter into brightness broke.
From every dint
Where the severed splinters
Had scattered a Sylvan or a Satyr woke;
Ounces came pouncing, dragon-people flew,
There was spirited stallion, squirrel unrespectful, clanging raven and kangaroo.
Jove sighed.
The hoving tide of
Ocean trembled at the motion of his breath.
The sigh turned
Into white, eternal,
Radiant Aphrodite unafraid of death;
A fragrance, a vagrant unrest on earth she flung,
There was favouring and fondling and bravery and building and chuckling music and suckling of the young.
Jove thought.
He strove and wrought at
A thousand clarities; from his brows sprang
With earnest mien
Stern Athene;
The cold armour on her shoulders rang.
Our sires at the fires of her lucid eyes began
To speak in symbols, to seek out causes, to name the creatures; they became Man.
World and Man
Unfurled their banner –
It was gay Behemoth on a sable field.
Fresh-robed
In flesh, the ennobled
Spirits carousing in their myriads reeled;
There was frolic and holiday. Jove laughed to see
The abyss empeopled, his bliss imparted, the throng that was his and no longer he.

Lewis’s poetry did not meet with much success in his lifetime, and sometimes it is opined that he was not a good poet. I don’t agree with this at all. I suspect that his lack of success at the time had more to do with reigning poetical Zeitgeist, which he mocked, but later, I think, grew to like a bit more.

Lewis had an exceptionally vivid notion of Creation. I love the passages of Aslan singing Narnia into being, and also this image of Jove which is so alive, and joyful, and shot full of glory. Note that there are six stanzas here as in the Bible there are six days, but the events of each “day” are different.

I love the squirrel unrespectful, and this: Our sires at the fires of her lucid eyes began

To speak in symbols, to seek out causes, to name the creatures; they became Man, and this: the throng that was his and no longer he.

I like to think about that rather stolid, uninteresting-looking man with all this wonder going around in his head.

Update 3/15/2018: There's a discussion in the comments about the layout of this poem. Courtesy of Marianne, here's the way it looked when it was first published in Punch in 1947. Click on the image to see it in something like full size. 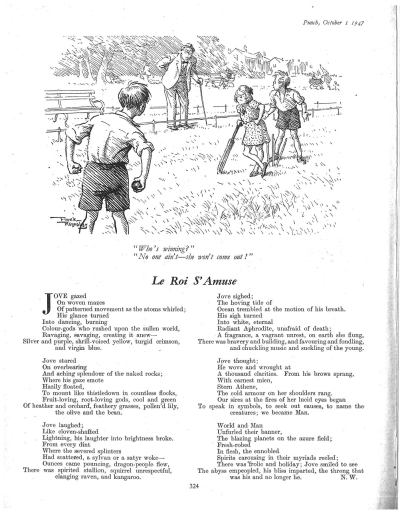 I enjoy Lewis's poetry but I can't say he's a big favorite. I guess I like this one more for what it says than for its execution. The typography puzzles me a bit--it seems intended to show the spreading and multiplying in a visual way, which seems a bit unlike Lewis. Seems like it would have worked just as well with all the lines beginning at the same margin. Unfortunately those long lines just won't fit in the column width here.

Sometimes I wonder if Lewis formatted the poem this way or if that was Hooper.

That would be a bold thing for an editor to do, but Lewis wasn't around to object, was he?

This poem was published in Punch magazine in 1947, and since the library here has a collection of Punch issues, I was able to have them scan the page the poem appeared on. I have it now in a PDF file -- Mac, if I send it to you can you make it an attachment to this post?

Anyway, the formatting is pretty much the way you have it, Janet. Only he broke the last line in each stanza into two lines, so for the first stanza it's "Silver and purple, shrill-voiced yellow, turgid crimson," on one line and the "and virgin blue" on a second line, with the "and" lining up under the "p" in "purple.

Very interesting. I'm not sure exactly how but I can figure out some way to make it available here. Thanks!

Marianne sent me that file and I've now added it to the post (sorry for the delay, Marianne).

Wonderful print from PUNCH! Through the topography I became more aware of nuances in the poem -- end of first lines and next-to-end syllables of second lines of each stanza, for example --

And the energy and purpose of "Our sires at the fires of her lucid eyes began / To speak in symbols, to seek out causes, to name the creatures" captures an essence of the mess that we are.

I turn from "Light on Dark Water" enriched, as usual.

With reference to my error noted above, I just learned a new word: Technopaegnia

I'm very glad that you find this blog enriching.